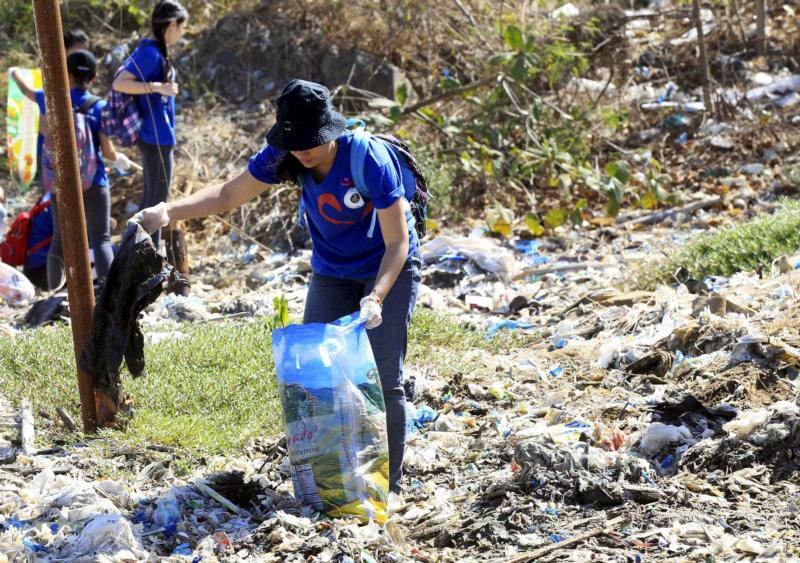 A volunteer picks up trash at Freedom Island, a marshland considered to be a sanctuary for birds, fish and mangroves in a coastal area of Las Pinas City, near Manila, Philippines, April 22, 2015. Catholic bishops in the Philippines criticized “the continuing destruction of our common home” and called for “ecological conversion” amid “climate emergency.” (CNS photo/Romeo Ranoco, Reuters)

MANILA, Philippines (CNS) — Catholic bishops in the Philippines criticized “the continuing destruction of our common home” and called for “ecological conversion” amid “climate emergency.”

The Philippine bishops’ news service, Cbcpnews.net, reported on a nine-page pastoral letter on the environment, released July 16. The report said the first half of the letter offers a reflection on the state of the environment, and the second half recommends concrete ecological actions.

“Given the high rate of poverty in the Philippines, the need to manage the environment is paramount. Poverty and environmental degradation mutually reinforce each other,” Cbcpnews.net reported the letter as saying.

The letter outlines the issues facing the country, among them the irresponsible mining, the building of dams, and the growing dependence on fossil fuel-based energy, such as coal. Several studies have shown that the Philippines is one of the countries most vulnerable to climate change, Cbcpnews.net said.

The letter was released after the bishops’ recent plenary assembly in Manila as way of helping put into action Pope Francis’ 2015 encyclical, “Laudato Si’, on Care for Our Common Home.

The bishops agreed not to allow the financial resources of Catholic institutions to be invested in favor of coal-fired power plants and mining companies, Cbcpnews.net reported.

“Divestment from such investment portfolios must be encouraged,” they stressed.

They also announced the creation of an “ecology desk” in all diocesan social action centers that would make ecology a special concern.

“We have the moral imperative to act together decisively in order to save our common home. This is our Christian duty and responsibility,” they said.

PREVIOUS: As Ethiopia works for reform, church tries to support people in many ways