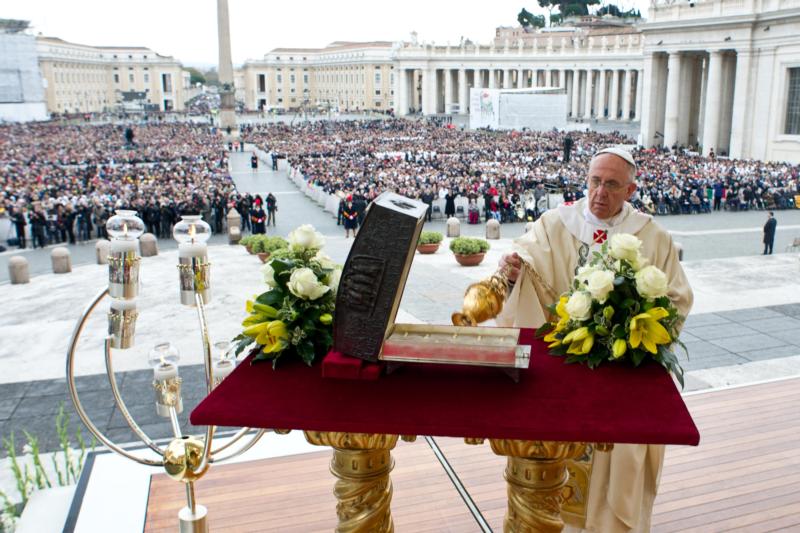 Pope Francis uses incense to bless a bronze reliquary containing the relics of St. Peter the Apostle during a Mass concluding the Year of Faith in St. Peter’s Square at the Vatican Nov. 24, 2013. In what Orthodox Ecumenical Patriarch Bartholomew of Constantinople described as a “brave and bold” gesture, Pope Francis gave the patriarch a famous reliquary containing bone fragments believed to belong to St. Peter. (CNS photo/L’Osservatore Romano)

The only time the bronze reliquary has been displayed publicly was in November 2013, when Pope Francis had it present for public veneration as he celebrated the closing Mass for the Year of Faith, opened by Pope Benedict XVI.

The bronze case contains nine of the bone fragments discovered during excavations of the necropolis under St. Peter’s Basilica that began in the 1940s.

In the 1960s, archaeologist Margherita Guarducci published a paper asserting that she had found St. Peter’s bones near the site identified as his tomb.

While no pope has ever declared the bones to be authentic, St. Paul VI announced in 1968 that the “relics” of St. Peter had been “identified in a way which we can hold to be convincing.”

Pope Paul took nine of the bone fragments, commissioned the bronze reliquary, and kept the relics in his private chapel in the papal apartments.

Pope Francis removed them from the chapel June 29, the feast of Sts. Peter and Paul.

Patriarch Bartholomew had sent a delegation led by Archbishop Job of Telmessos to the Vatican for the feast day celebrations. After the solemn Mass, Pope Francis and Archbishop Job went down to St. Peter’s tomb under the high altar to pray.

Then, the archbishop recounted, Pope Francis asked him to wait for him because he had a gift for his “brother” Patriarch Bartholomew. The pope came back and led the archbishop to his little blue Ford Focus and they were driven to the Apostolic Palace.

They entered the chapel of the old papal apartment, where Pope Francis chose not to live, and “the pope took the reliquary that his predecessor Paul VI had placed in the little chapel and offered it to his guest,” according to Vatican News.

“For us, this was an extraordinary and unexpected event that we could not have hoped for,” Vatican News quoted the archbishop as saying.

He phoned Patriarch Bartholomew as soon as he could to tell him the news.

Arrangements quickly were made for Msgr. Andrea Palmieri, undersecretary of the Pontifical Council for Promoting Christian Unity, to accompany the relics to the Phanar, the Orthodox patriarchate’s headquarters in Istanbul.

At a ceremony June 30 to receive the relics and venerate them, Patriarch Bartholomew said, “Pope Francis made this grand, fraternal and historic gesture” of giving the Orthodox fragments of the relics of St. Peter.

“I was deeply moved,” the patriarch said, according to the news published on the patriarchate’s Facebook page along with 15 photos. “It was a brave and bold initiative of Pope Francis.”