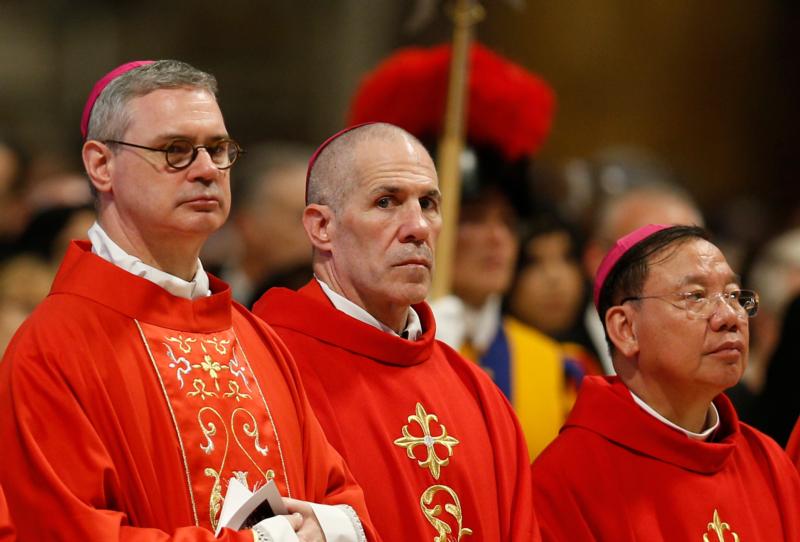 Archbishops Peter A. Comensoli of Melbourne, Australia, Michael Byrnes of Agana, Guam, and Joseph Vu Van Thien of Ha Noi, Vietnam, attend Pope Francis’ celebration of Mass marking the feast of Sts. Peter and Paul in St. Peter’s Basilica at the Vatican June 29, 2019. After the Mass the pope presented palliums to new archbishops from around the world. (CNS photo/Paul Haring)

VATICAN CITY (CNS) — The first time Archbishop Michael J. Byrnes of Agana, Guam, celebrated Mass in his cathedral, he had to cross a picket line to do so.

Australian Archbishop Peter A. Comensoli of Melbourne said Catholics in his archdiocese are angry.

The two were among 30 archbishops from 25 nations who received their palliums — woolen stoles — from Pope Francis June 29.

In interviews with Catholic News Service before the Mass, both archbishops spoke of the impact of clerical sexual abuse on the people of their dioceses and said survivors are the members of their flocks most in need of care.

The first week of August, both Archbishop Byrnes and Archbishop Comensoli will celebrate their first anniversaries as archbishop of their dioceses. For both archdioceses, it has been a year of coming face-to-face with the abuse crisis.

Archbishop Byrnes was an auxiliary bishop of Detroit when Pope Francis sent him to Guam in October 2016 as the coadjutor bishop with special powers in the midst of accusations of sexual abuse and financial mismanagement against Guam’s Archbishop Anthony Apuron.

The appointment “was a little overwhelming,” the archbishop said. Guam was far away and Catholics there were in an uproar.

Meeting Pope Francis before he went to Guam for the first time, he said he told the pope that when a sports team is doing badly, the important thing is to return to the fundamentals and that’s what he planned to do in Guam: “Being friends with Jesus Christ.”

But “my first meeting when I arrived in Guam was with lawyers,” he said. “At that time we had six complaints of sexual abuse of minors and to date over 230 victims have come forward — it’s a lot for a small island.”

When he arrived in 2016, protesters had been gathering outside the cathedral before every Mass the former archbishop celebrated. To celebrate his first Mass there, Archbishop Byrnes had to cross the picket line.

“I didn’t pick up a sign myself, but I understood,” he said. “But after a few months, they laid down their picket signs and walked into the church for Mass. These are faithful people.”

Pope Francis assigned U.S. Cardinal Raymond L. Burke as chief judge of the trial of Archbishop Apuron; the cardinal flew to Guam to listen personally to the testimony of the victims.

“Cardinal Burke was really a gem,” the archbishop said. “He traveled miles to make sure he spoke with the victim accusers.”

It was a sign to the people that “yes, the Vatican is listening,” he said.

The tribunal found Archbishop Apuron guilty, and Pope Francis banned him from returning to the island.

Archbishop Byrnes said he believes Catholics in Guam are starting to “sense that the church is starting to act more and more like the church.”

The Melbourne connection to the crisis has made headlines around the world for the past year; Cardinal George Pell is appealing a conviction on five counts of sexual abuse of children while he was archbishop of Melbourne.

Under Archbishop Comensoli’s leadership, the Archdiocese of Melbourne has begun implementing the Australian Catholic Church’s new safeguarding standards in response to a report by the Royal Commission into Institutional Child Sexual Abuse.

The past year, he said, was “a Gospel year,” shunning the descriptions of good or bad.

“Particularly troubling,” the archbishop said, was “the way victims of sexual abuse had not been listened to in the past and have not been cared for in the way they ought to be as one of God’s most particular children.”

“Our people are suffering quite deeply,” he said. “They, too, take on a sense of the brokenness of those who have been so deeply wounded by sexual abuse, the horror of it.”

The people are angry, the archbishop said. They are disappointed and disheartened.

But all of those realities are “part of the Gospel,” along with ongoing ministry, education, charitable works and initiatives to reach out to and care for migrants and refugees.

“In all of this, there is Jesus. In all of it,” Archbishop Comensoli said.

The Melbourne archbishop received his pallium at the end of the Australian bishops’ weeklong “ad limina” visit to Rome. In the more than two hours they spent with Pope Francis and in meetings with leaders of the offices of the Roman Curia, Archbishop Comensoli said the two top topics were the sexual abuse crisis and the ongoing process of the plenary council of the Catholic Church in Australia.

Together those topics shape where the church in Australia is and where it hopes to go, he said. A plenary council is a rare gathering of all the bishops of a country in a synod-like meeting, but one which has legislative powers. In 2018 Pope Francis approved the convocation of the plenary council and some 220,000 people have participated in listening sessions or by making written suggestions.

“We’ll be looking deeply into key issues in the life of the church in Australia and ways in which we might act into the future for the sake of the Gospel,” he said.

The question at the heart of the process, he said, is “What is God asking of the church in Australia at this time?”

PREVIOUS: Disciples seek God’s glory, not their own, pope says at Angelus