Disciples seek God’s glory, not their own, pope says at Angelus 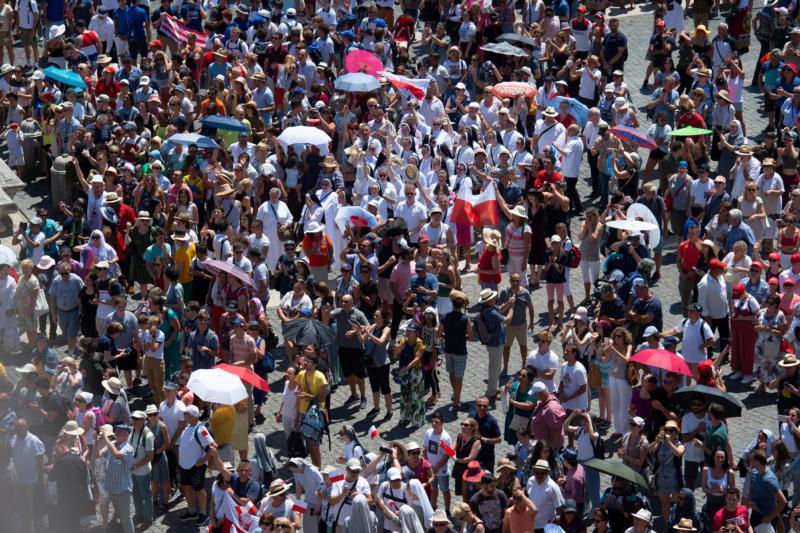 The crowd is seen as Pope Francis leads the Angelus from the window of his studio overlooking St. Peter’s Square at the Vatican June 30, 2019. (CNS photo/Vatican Media)

VATICAN CITY (CNS) — Men and women who are called to follow Christ must do so to help those in need and not to seek their own fame and glory, Pope Francis said.

True disciples make “a free and conscious choice, made out of love, to reciprocate God’s invaluable grace and not as a way to promote oneself,” the pope said June 30 during his Sunday Angelus address.

“This is sad! Woe to those who think they are following Jesus to promote themselves, that is, to make a career, to feel important or to gain a place of prestige,” he said. “Jesus wants us to be passionate about him and the Gospel.”

In his talk, the pope reflected on the Sunday Gospel reading, which recalled Jesus’ responses to three people he called to follow him. Those examples, he said, were three cases of vocations that “highlight what is required of those who want to follow Jesus to the end.”

Responding to the first person who said that he would follow Christ “wherever you go,” Jesus said, “The Son of Man has nowhere to rest his head.”

The pope said Jesus “pointed out to us, his disciples, that our mission in the world cannot be static, but is itinerant.”

“The Christian is an itinerant,” he said. “The church by its very nature is on the move, not sitting and quiet in its own enclosure. It is open to the widest horizons, it is sent — the church is sent — to bring the Gospel to the streets and reach the human and existential peripheries.”

The second person, who said he would follow Jesus after burying his father, receives a “deliberately provocative” response from Christ who tells him to “let the dead bury their dead,” the pope explained.

Nevertheless, he said, Jesus “affirms the primacy of following and proclaiming the Kingdom of God,” even over family.

“The urgency of communicating the Gospel, which breaks the chain of death and inaugurates eternal life, does not admit delays, but requires readiness and availability,” he said.

Finally, Pope Francis said Jesus’ response to the last person who wished to say farewell to his family “excludes regrets and backward glances” and requires the virtue of decisiveness.

“The value of these conditions imposed by Jesus — itinerancy, readiness and decisiveness — does not lie in a series of ‘noes’ to good and important things in life,” the pope said. “Rather, the accent should be placed on the main objective: to become a disciple of Christ.”

NEXT: Shepherding amid scandal: Archbishops talk about healing