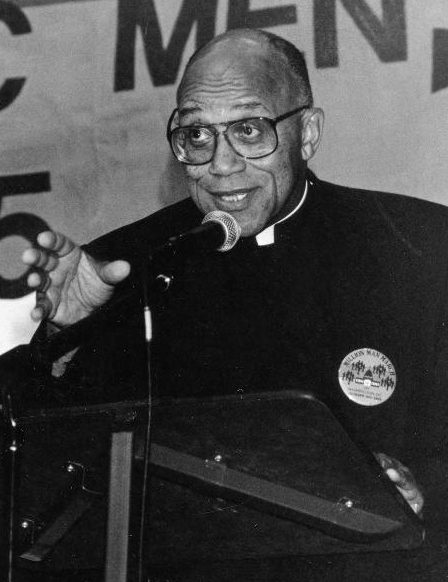 Father George Clements, a Chicago priest who made national headlines when he adopted a son in the early 1980s, has been asked by Chicago Cardinal Blase J. Cupich to step aside from ministry pending the outcome of an investigation into an allegation of sexual abuse of a minor in 1974, when the now-retired priest was pastor of Holy Angels. In addition to adopting a son, Father Clements, pictured in a 1995 photo, founded of the “One Church, One Child” program to encourage adoption. (CNS photo/Michael Alexander)

CHICAGO (CNS) — Cardinal Blase J. Cupich of Chicago has asked now-retired Father George Clements, 87, who is well known as a civil rights leader, an adoptive father and a national advocate of adoption, to step aside from ministry during an investigation into an abuse claim made against him.

An Aug. 8 news release from the Chicago Archdiocese said the alleged abuse of a minor reportedly occurred in 1974, while Father Clements served as pastor of Holy Angels Parish in Chicago.

“The allegation was referred to the archdiocesan Office for Child Abuse Investigations and Review by the Chicago Police Department,” the news release said. “In keeping with our child protection policies, the allegation was reported to the Illinois Department of Children and Family Services and the Cook County State’s Attorney.”

The statement added that the person making the allegation “has been offered the services of the archdiocese’s Office of Assistance Ministry.”

In an Aug. 8 interview with the Chicago ABC-TV News affiliate, Father Clements called the accusation “totally unfounded.” “Here I am, 87 years old, and I don’t know what this is all about or anything,” he said.

Father Clements, who retired in 2006, was associate pastor at two Chicago parishes before he was named pastor of Holy Angels in 1969. He served there until 1991. For the next two years, he served in the Diocese of Nassau in the Bahamas, West Indies. In 1993, he returned to the Chicago Archdiocese and was resident priest at St. Sabina Parish, while also ministering in the Archdiocese of Washington from October 1993 to March 2006.

He was been pastor emeritus at Holy Angels Parish since March 31, 2006.

“Since his retirement, Father Clements has assisted at various parishes in the archdiocese,” the archdiocesan news release said. “All pastors have been notified of this action.”

The Archdiocese of Chicago said it “takes all allegations of sexual misconduct seriously and encourages anyone who feels they have been sexually abused by a priest, deacon, religious or lay employee to come forward.”

While he was pastor at Holy Angels, Father Clements gained public attention in 1981 when he became the first U.S. Catholic priest to adopt a child. That adoption was the catalyst for the foundation of the “One Church, One Child” program to address the number of African American children available for adoption lingering in the foster care system. After the first adoption, Father Clements adopted three other sons.

Operating in at least 32 states, the program has placed more than 170,000 children in homes since its beginnings. The focus remains the same: ensuring permanency for African American children.

Father Clements is also known for his involvement in the civil rights movement, having marched with the Rev. Martin Luther King Jr., in Chicago, Alabama and Mississippi, and was arrested for civil disobedience during those marches.

PREVIOUS: To walk in another’s sandals: Colorado girl carries the water for Kenya

NEXT: Banks holds no resentment for wrongful conviction; he’s focused on others