Banks holds no resentment for wrongful conviction; he’s focused on others 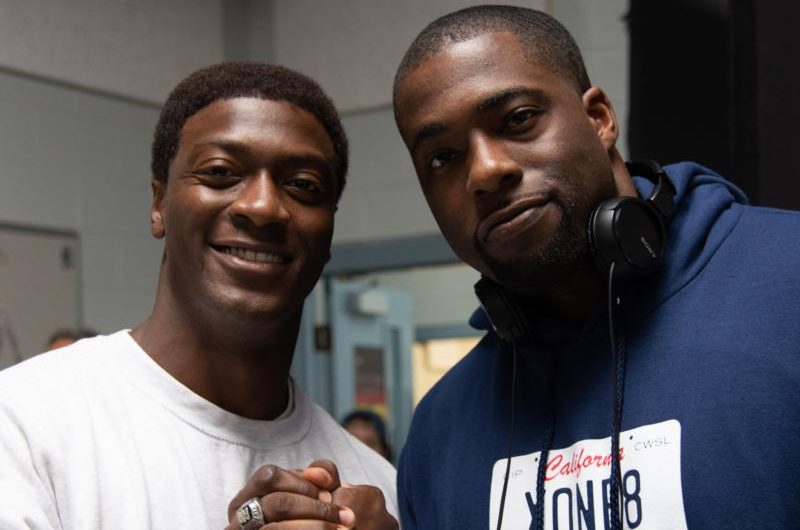 Actor Aldis Hodge and the real-life Brian Banks pose in an undated photo. The new film “Brian Banks,” staring Hodge, recounts the true story of the high school football star whose promising future was derailed when he was falsely accused of rape. The California Innocence Project, a law school clinic at California Western School of Law in San Diego, which helped bring about Banks’ exoneration, hosted a special screening of the film Aug. 3, 2019, at the Museum of Photographic Arts in Balboa Park. (CNS photo, Katherine Bomboy, courtesy Bleecker Street)

SAN DIEGO (CNS) — The new film “Brian Banks” recounts the true story of a high school football star whose promising future was derailed when he was falsely accused of rape.

Facing the prospect of a 41-year sentence, he accepted a plea bargain and went on to spend more than five years in prison and another five on parole, during which he was required to wear a GPS ankle monitor and wasn’t allowed to play football, before his conviction was ultimately overturned in 2012.

The California Innocence Project, a law school clinic at California Western School of Law in San Diego whose work helped bring about Banks’ exoneration, hosted a special screening of the film Aug. 3 at the Museum of Photographic Arts in Balboa Park. The film was released in theaters nationwide Aug. 9.

The dignitaries walking the red carpet prior to the screening included the real-life Brian Banks (portrayed in the film by Aldis Hodge), who briefly played for the Atlanta Falcons after his exoneration, and Justin Brooks, director and co-founder of the California Innocence Project.

Among those adding Hollywood glamour to the red carpet were Academy Award nominee Greg Kinnear, who plays Brooks in the film, and director Tom Shadyac.

Banks, who along with Brooks is one of the film’s executive producers, told The Southern Cross, San Diego’s diocesan newspaper, that he doesn’t harbor any hatred or resentment over the injustice that he experienced.

“Focusing on the past doesn’t change it,” he said. “It’s still what it is. So, what’s important now is what I’m going to do with that, and that’s try to help other people in similar situations.”

The California Innocence Project, which was founded in 1999, has exonerated 30 people to date. It reviews more than 2,000 innocence claims every year and provides pro bono legal services.

“It’s just so powerful, the idea that an innocent person would make the choice to plea,” said Brooks, as he stood alongside Kinnear on the red carpet. “I mean, think about that for a second: that you know you didn’t commit a crime, but you still make the decision to plea.”

Brooks, who also is a professor at California Western School of Law, explained that potential prison sentences are so lengthy that, for innocent defendants, “it becomes a business decision and you’re looking to cut your losses.”

“I think it shows that the system has to be broken if innocent people are pleading,” the attorney said.

Doug Atchison, who wrote the screenplay for “Brian Banks,” noted that when people hear statistics about incarceration, “it can become just numbers.” His duty as screenwriter was to help audiences “to identify with Brian as a human being.”

Kinnear, who described Banks as “a pretty amazing guy,” said that, after receiving the script, the decision to join the cast wasn’t difficult.

“It’s impossible to read this story and not be deeply affected by it,” the actor said, clarifying that he wasn’t deeming it impossible merely “for most people,” but “for anybody.”

“You have something wrong with you,” he said, if you aren’t drawn into the story, both “the injustice of what happened and the inspiration of a guy who … stayed positive through these horrible circumstances.”

Shadyac, whose previous directorial efforts include three collaborations with comedian Jim Carrey — “Ace Ventura: Pet Detective,” “Liar Liar” and “Bruce Almighty” — as well as the Eddie Murphy version of “The Nutty Professor,” was “moved” by what he read and wanted to meet Banks in person. He wasn’t disappointed by that encounter.

“He’s an incredibly brilliant soul,” Shadyac said of the film’s namesake. “He’s been crushed, but he’s turned into a diamond.”

The director expressed hope that the film might accomplish more than simply telling a compelling story, that it might raise awareness of flaws in the U.S. criminal justice system and inspire people to get involved with one of the many Innocence Projects active throughout the country.

“I hope that people realize that this is happening in America,” said Shadyac. “It’s not just Brian.”

The film includes several nods to religious faith, including the image of a young Brian kneeling in prayer at the foot of his bed; a cross hanging on the wall of his mother’s home; and, in one scene, his mother clutching at her cross necklace.

While speaking to The Southern Cross, Banks confirmed that faith did indeed play a role in his story.

While in prison, Banks studied religion as well as psychology and sociology. And he says this brought him to “more of a spiritual space in my life.”

NEXT: Franciscans’ Denver meeting first phase of making six provinces into one