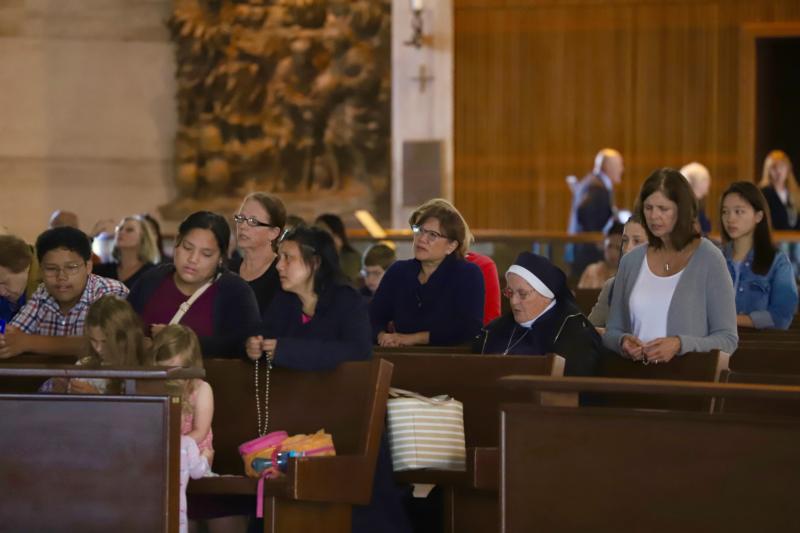 Worshippers pray the rosary at San Francisco’s Cathedral of St. Mary of the Assumption before Mass Aug. 11, 2019, celebrated by Archbishop Salvatore J. Cordileone. The Mass conclude the Novena for Life seeking the intercession of Our Lady of Guadalupe to defeat legislation that would require all four-year California state university health centers to provide medication abortion. (CNS photo/Debra Greenblat, Archdiocese of San Francisco Office of Human Life & Dignity)

SAN FRANCISCO (CNS) — Archbishop Salvatore J. Cordileone of San Francisco called for Christians to be the “moral conscience” of society during a Mass marking the end of a novena against an upcoming abortion bill.

From Aug. 3 to Aug. 11, Californian dioceses and archdioceses prayed a novena for the intercession of Our Lady of Guadalupe to defeat a measure approved by the state Senate, S.B. 24, which would require state college and university health centers to stock medication abortion pills.

The state Assembly was expected to take up the bill soon after the Legislature’s Aug. 12 return from its recess.

In his homily for the 9 a.m. Mass at St. Mary’s Cathedral, the archbishop spoke about the culture of death’s expression in society and how Christians can respond to it.

He began by citing a recent New York Times editorial that called for embracing the basic values that have historically glued American society together. “The idea is that by focusing on the common good, we can retrieve a sense of public decency,” he said.

Society not only tolerates abortion, he said, but celebrates its existence, heralding it as “as progress and a sign of an enlightened society.” The devastating effect of abortion on women who lacked the love, care and support to make a choice for life, the social indifference to their plight, he said, is masked.

“Can there really be a sense of common decency if this is the case? Perhaps at a superficial level, perhaps we can be polite to each other, but at a deeper level of shared values there is a crisis going on,” he said.

While it seems “the tide is turning” and the stakes of abortion have become clearer and less deniable, Archbishop Cordileone said the pro-life cause still has much to accomplish, especially in politics, where politicians have felt the need to become “as pro-abortion as possible in order to make themselves viable candidates.”

For those who want to build a culture of life, he said, the Sunday readings Aug. 11 were especially helpful, offering lessons on identity, vigilance and charity for believers.

Like the Israelites at the first Passover, Christians are rooted in a historical event that gives “the certainty of hope for God’s deliverance in his own time and in his own way.”

Putting that identity into action means Christians should be “spiritually agile” and resistant to being fooled by popular fashions, political conventions, or cultural pressures. Instead, he said, how Christians should make the Gospel the foundation of their thinking and action in the world and “serve as the conscience of society,” which can only happen if they live their faith with integrity.

“If Christians are failing in this role, perhaps it is because too many of them are themselves corrupted in their way of thinking and in their own conduct, private as well as public,” the archbishop said. “We are supposed to know better and so we will be held to a higher standard.”

The commandment to charity is an obligation for Christians, and “what could be a greater act of charity than to defend those who have no voice with which to defend themselves?” the archbishop asked. “It is precisely by such acts of charity on behalf of the poor, defenseless and marginalized that we prepare ourselves for the life of heaven.”

Seeking the good of those “who are most disadvantaged and defenseless” is the highest form of acting as the moral conscience of society, he said, and a clear witness to God’s love.

“Ultimately God has created us for life and love. Let us love then that we may have life and have it to the full.”

If the Assembly passes S.B. 24, it would then go to Gov. Gavin Newsom for his signature. A similar bill was passed last year but vetoed by then-Gov. Jerry Brown.

If S.B. 24 becomes law, the state’s public colleges and universities would have to provide RU-486, a chemical compound that, taken in pill form, can induce abortion in women up to 10 weeks pregnant by blocking the hormone progesterone needed to sustain a pregnancy.