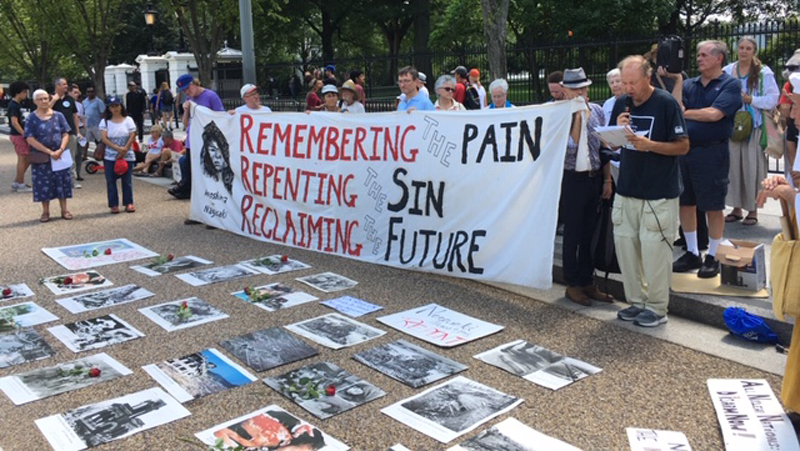 WASHINGTON (CNS) — About 40 peace advocates representing about a dozen religious communities held a special Hiroshima and Nagasaki Commemoration Prayer Service of Repentance midday Aug. 9 outside the White House in Washington.

It was the 74th anniversary of the United States dropping an atomic bomb on Nagasaki, Japan, killing about 74,000 people.

Three days earlier, the group held a similar observance at the Pentagon to mark the Aug. 6, 1945, bombing by the U.S. of Hiroshima, killing more than 100,000 people. It was the first atomic bomb used in warfare. Japan surrendered Aug. 15.

Organizers of the commemoration said the two nonviolent acts of public witness called on the U.S. government to repent for the bombings of Japan and urged the abolition of all nuclear weapons in the U.S. and worldwide.

Anniversary actions and events were held Aug. 6-9 in Hiroshima and Nagasaki as well as at nuclear weapons facilities throughout the U.S.

In Washington, the peace group heard testimony from Michiko Kodama, who, at age 7, experienced the Hiroshima atomic bombing. At 82, she is now the assistant secretary-general of the Japan Confederation of A- and H-Bomb Sufferers Organizations.

On Aug. 6, 1945, she was a second-grader in a Hiroshima primary school and was inside the wooden school building when suddenly she felt “a blinding flash,” she said.

“The next moment, the ceiling of the building collapsed and sharp splinters of windowpanes flew all around. On my way home, carried on the back of my father who came to the school to find me, I witnessed hell on earth,” she recalled. “I saw a man with his skin burned heavily, peeling and dangling. A mother with heavy burns carrying a baby, which was burned black and looking like charcoal.

“Others with their eyeballs popped out or holding their protruding intestines in their hands frantically ran around, trying to escape.”

Besides the tens of thousands killed instantly, “those who barely survived those days would eventually die one after another from the delayed effects of radiation,” Kodama said. “The atomic bombs did not allow the Hibakusha (the survivors) either to die or live as humans.”

The Hibakusha who “miraculously lived” still suffer from survivors guilt, she noted. “(Their) suffering is deep and still persisting. Even after 74 years, ‘that day’ will continue to haunt them.” She said she still feels “deep regret” over losing family members, including her parents and two younger brothers.

“No one in the world should ever experience that hell on earth,” she said, which is why the Hibakusha “have traveled around the world to witness the damage and aftereffects of the atomic bombing, appealing, ‘No More Hibakusha’ and ‘Abolish Nuclear Weapons.'”

After Kodama spoke, red roses were placed on a dozen photos of the bomb victims and destroyed cities of Hiroshima and Nagasaki displayed on the street in front of the White House. The photos, along with other signs and banners, formed a makeshift shrine to the victims.

Then Kodama was presented with a dozen white roses, which was followed by the gathering reading an “Apology Petition” to the people of Japan.

NEXT: As Calif. novena ends, Christians urged to be society’s ‘moral conscience’