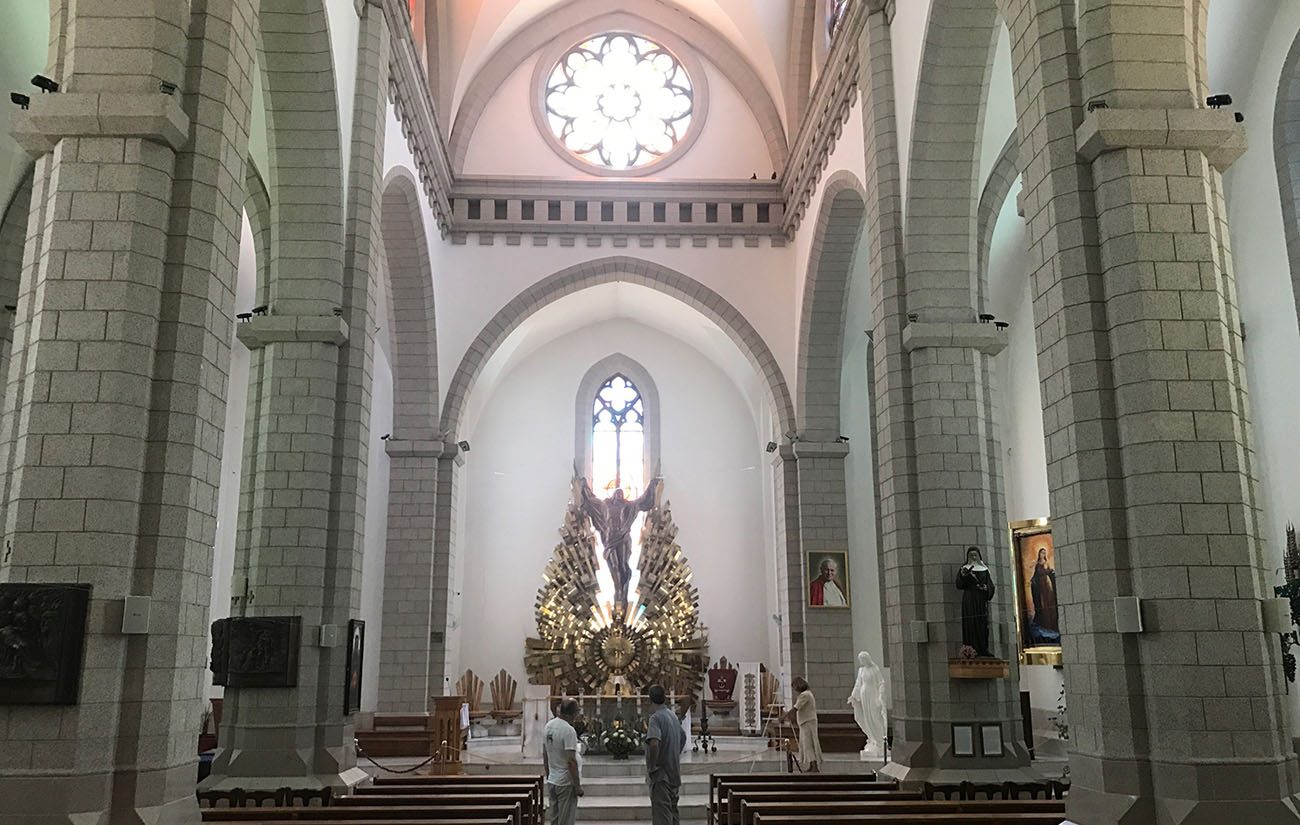 The Cathedral of the Sacred Heart of Jesus in Tashkent, Uzbekistan, is seen in July 2019. It was rebuilt with support of U.S. Catholics. (CNS photo/courtesy Bishop Donald J. Hying)

MADISON, Wis. (CNS) — The Catholic Church in Central and Eastern Europe and Central Asia is making “remarkable progress” in the countries that were once behind the Iron Curtain, said a bishop who recently visited the region.

Bishop Donald J. Hying of Madison, a member of the U.S. bishops’ Subcommittee on Aid to the Church in Central and Eastern Europe, visited Uzbekistan and Kyrgyzstan for the first time in July and saw how Catholics have maintained their faith, despite seeing their churches seized or destroyed, leaving them with no place to worship and minimal pastoral support.

People often gathered clandestinely under communist rule, he said. Despite the fall of communism 30 years ago, the church in the countries continues to struggle to rebuild after years of oppressive rule.

“They are very strong in faith and dedicated to the church and each other. For many years, they practiced their faith underground, living without priests and the sacraments,” he said.

Bishop Jeffrey M. Monforton of Steubenville, Ohio, subcommittee chairman, also made the weeklong trip in July. The work of the subcommittee also supports the Catholic community in Central Asia.

Bishop Hying recalled meeting a group of Catholics in one village who clandestinely told stories of Jesus and continued to pray with one rosary.

“They didn’t remember the specific prayers, but they took turns praying with the rosary as they passed it around the group,” he said.

Each bishop on the subcommittee is assigned to some of the 28 countries in the region. Bishop Hying is assigned to Russia, Serbia and Uzbekistan, but he also made a brief stop in Kyrgyzstan because of his friendship with Jesuit Father Tony Corcoran, who serves as apostolic administrator of the Catholic Church there.

“We made this visit to be supportive of the church and see what projects we could support,” Bishop Hying told the Catholic Herald, newspaper of the Diocese of Madison.

Bishop Hying called the region’s history “fascinating.” It was part of the old Silk Road, the international trade route and cultural bridge linking many lands in Asia and Europe.

“Some cities in this area are over 4,000 years old,” Bishop Hying said.

He said Catholics are a “very tiny minority” in Central Asia, but they live peacefully with the Muslim majority.

After World War II, the Iron Curtain was established as a nonphysical boundary dividing Europe into two separate areas. The Soviet Union blocked itself and its satellite states from open contact with the West and its allied states.

During that time, the Soviet Union promoted atheism. Many priests and religious women and men were sent to Soviet prison camps.

“All the churches were closed or destroyed,” Bishop Hying said.

With the end of the Cold War in 1991, the countries behind the Iron Curtain regained their independence and entered a new era of freedom. They began to rebuild the church and society after decades of persecution.

“Their faith is the essence of their lives,” Bishop Hying said. “They reach out to the needy, suffering, and sick of all faiths.”

While the two countries have made great strides, many of the church communities are located in rural areas and suffer from poverty, making the work of recovery more difficult.

Still, the small church in the region is growing and rebuilding with the support of Catholics in the United States through the annual collection for the church in Central and Eastern Europe.

Bishop Hying visited the Cathedral of the Sacred Heart of Jesus in Tashkent, Uzbekistan. “It had been mostly destroyed but was rebuilt with the help of U.S. Catholics,” he said. “It’s beautiful.”

Uhler is editor of the Catholic Herald, newspaper of the Diocese of Madison, Wisconsin.