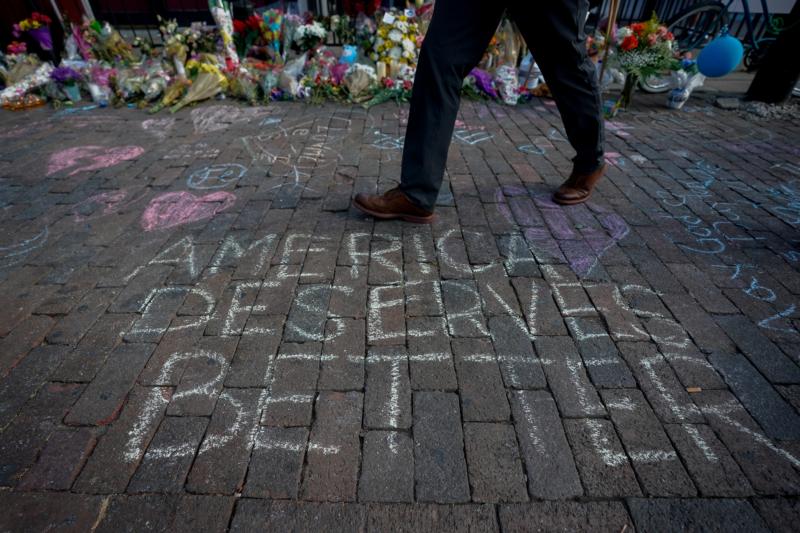 A man walks past a memorial Aug. 7, 2019, for those killed in a mass shooting in Dayton, Ohio, four days earlier. Three U.S. bishops’ committee chairmen issued a statement Aug. 8 to call on the nation’s elected officials “to exert leadership in seeking to heal the wounds” of the country caused by the Aug. 3 and 4 mass shootings and urged an end to hateful rhetoric many see as a factor in the violence particularly in Texas. The Aug. 3 shooting in El Paso, Texas, was followed less than 24 hours later by the mass shooting in Dayton Aug. 4. (CNS photo/Bryan Woolston, Reuters)

WASHINGTON (CNS) — Three U.S. bishops’ committee chairmen have called on the nation’s elected officials “to exert leadership in seeking to heal the wounds” of the country caused by the Aug. 3 and 4 mass shootings and urged an end to hateful rhetoric many see as a factor in the violence particularly in Texas.

“The tragic loss of life of 22 people this weekend in El Paso demonstrates that hate-filled rhetoric and ideas can become the motivation for some to commit acts of violence,” the bishops said in a joint Aug. 8 statement. “The anti-immigrant, anti-refugee, anti-Muslim, and anti-Semitic sentiments that have been publicly proclaimed in our society in recent years have incited hatred in our communities.”

“Hatred and harsh rhetoric were echoed in the El Paso shooter’s explanation about why he committed this weekend’s shooting,” they said.

At least 22 have died from the Aug. 3 shooting massacre at a Walmart in El Paso, which, so far, is the eighth-deadliest mass shooting on U.S. soil. Another 26 people were injured. The suspect has been identified as Patrick Crusius, 21. He was taken into custody without incident.

Crusius, a white male, published a manifesto online shortly before he opened fire in which he decried immigration and announced “this attack is a response to the Hispanic invasion of Texas,” according to news reports.

This anti-immigrant attitude language was “evident in the motivation of the shooters who attacked the Tree of Life Synagogue in Pittsburgh last year and the Mother Emanuel AME Church in Charleston (South Carolina) in 2015,” the three bishops noted in their statement.

“We, therefore, renew our call to all to act swiftly to stop using hate-filled language that demeans and divides us and motivates some to such horrific violence,” they added. “Instead, we ask our leaders and all Americans to work to unite us as a great, diverse and welcoming people.”

Less than 24 hours after the El Paso shooting, authorities in Dayton, Ohio, reported at least nine dead and more than a dozen injured after a gunman opened fire on a crowd at or near a bar in the early hours of Aug. 4. The suspected gunman was fatally wounded. He was later identified as 24-year-old Connor Betts, who also was white.

Police officials said his motive was not immediately clear but they were aware that Betts, who self-identified as a “leftist” and a supporter of socialism, had a “history of obsession with mass shootings.”

PREVIOUS: Priest at parish near El Paso shooting: ‘Let’s take care of each other’

NEXT: Three leaders honored as ‘People of Life’ during national conference