Priest at parish near El Paso shooting: ‘Let’s take care of each other’ 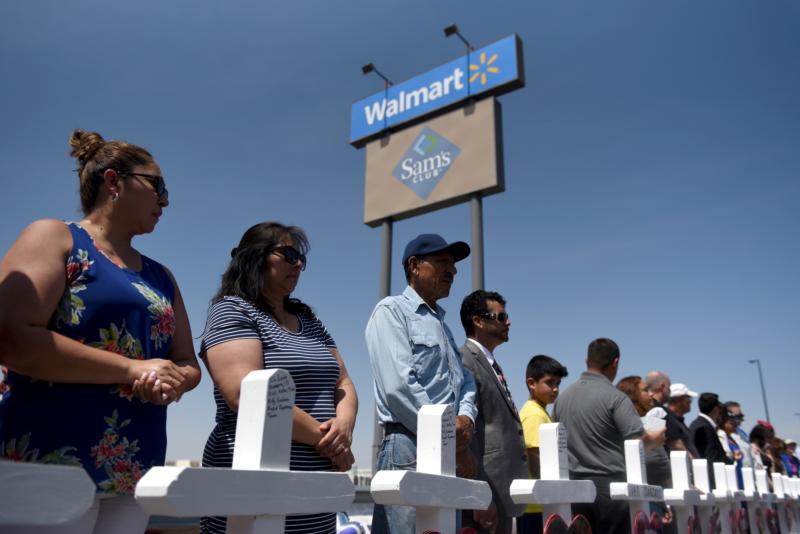 People stand near crosses Aug. 5, 2019, in honor of the victims of a mass shooting Aug. 3 at a Walmart store in El Paso, Texas. Since 1996 cross builder Greg Zanis of Aurora, Ill., has delivered free of charge more than 26,000 wooden memorials at the site of mass murders and other tragedies across the U.S. (CNS photo/Callaghan O’Hare, Reuters)

WASHINGTON (CNS) — When Father Michael Lewis, parochial vicar at St. Pius X Parish in El Paso, Texas, first heard about the shooting that took place a mile and a half from his parish, he said he would do whatever was needed.

Right away, that turned out to be providing a place for prayer.

So, the night of Aug. 3, hours after the border town was harshly shaken from a normal Saturday routine and thrown into panic, fear and devastating loss, he opened the doors of the bilingual parish, Iglesia St Pius X, for a prayer vigil to pray for the victims, still at that point unidentified, for those injured in the gunfire and for the entire stunned community.

Father Lewis said he told those gathered: “The only way to combat hate is with love.”

“I cried with them that night and then I told them I had to go to the hospital to help with anointings,” he said, adding: “In the moment I was trying to do the most I could do to be with the people of God.”

The priest, who was just ordained at the end of May, was thrown into a situation he had never imagined and also was called upon to step up even more than he might have, because the pastor was away.

For his homily the next morning — of which he noted the “readings weren’t perfect ones but you work with what you get” — he pulled from the Gospel passage the message: “We have to remind ourselves of the things God thinks are important, celestial treasures.” He told parishioners: “We become rich in love, patience, kindness and compassion by giving those things away.”

This is something he has seen in abundance in the days after the horrific shooting, which upended the lives of so many in the community he said is known for its friendliness.

“We take this for granted,” said the priest, who grew up in El Paso. He said everyone talks to people there, even in grocery lines, which he said might have something to do with the fact that “we’re in the middle of nowhere in the desert,” so there is this attitude of “we’re all in this together, so let’s take care of each other.”

That sense is in full view right now, he said, even though it has been tested to the extreme.

The immediate response after the shooting was “overwhelming and selfless,” he told Catholic News Service Aug. 7 during a break for a retreat he was giving to parish school teachers.

He said the teachers are “struggling to make sense of what happened and bracing themselves to discuss this with students on Monday” when schools open. Public schools in the area opened Aug. 5, which is why so many families were shopping Aug. 3, getting school supplies.

“This is when we remember God is with us; we are not far from him,” is his message to teachers. It also was his message to youth group leaders who asked him what they should do now.

“You meet. You help them where they are at and pray for victims and for us. You need to be with each other. That’s how we’re going to get through this — together,” he told them.

Father Lewis attended the parish youth group meeting Aug. 5 and days later he choked up talking about it, pointing out that “every single kid either knew one of the victims, or injured, or someone who ran for their lives.”

Normally, parishes are contacted by funeral homes about a parish funeral, but in the case of Englisbee’s funeral, the family came to the church first Aug. 5 to make the arrangements, and Father Lewis was glad because it turned out to be “another way to be with them in the midst of this senselessness.”

Englisbee had been in the checkout line at Walmart the morning of Aug. 3 and had spoken to one of her sons on the phone just before the shooting began. The grandmother and mother of eight, who lost one child in infancy, raised the family by herself after her husband’s death from a heart attack.

Benavides, an Army veteran and retired bus driver, was at Walmart getting groceries with his wife of 30 years, Patricia, and was paying at the register when the shooting began. His wife had been sitting on a bench near the bathroom and was pushed into a bathroom during the shooting, according to news reports.

Father Lewis will celebrate Englisbee’s funeral Mass Aug. 9, and the pastor, Father Wilson Cuevas, who is returning, will be the main celebrant for Benavides’ funeral Aug. 13.

Two days before the funeral for the 86-year-old parishioner, Father Lewis wasn’t sure what he would say. He said even though the “circumstances of her death were sudden and painful, our hope, that she is with God, is the same. She is enjoying eternal life, that is our faith.”

The difference here, he said, is that people are in pain because of the circumstances around this death and the deaths of so many others, which can’t be ignored.

The message he hopes to deliver is to “focus on the hope that comes from this: the light in the darkness and how Christ can lead us out of this out of pain and sadness.”

The priest, sounding worn down himself, acknowledged that seminary training didn’t fully prepare him for this experience, but it partially did because of his clinical pastoral training at Children’s Medical Center in Dallas where he was a chaplain in the intensive care unit and daily ministered to families coping with difficult situations and grief.

He also noted that in a previous time as a seminarian, he was in Florida during the 9/11 attacks and the pastor was out of town at the time, something he immediately thought of after the El Paso shooting.

He said no one could ever be fully prepared for the tragedy they just endured.

“We can only rely on the grace of God,” he said. “We feel the prayers and will continue to need them for quite some time.”

NEXT: Bishops urge end to hateful rhetoric that many see as factor in shootings