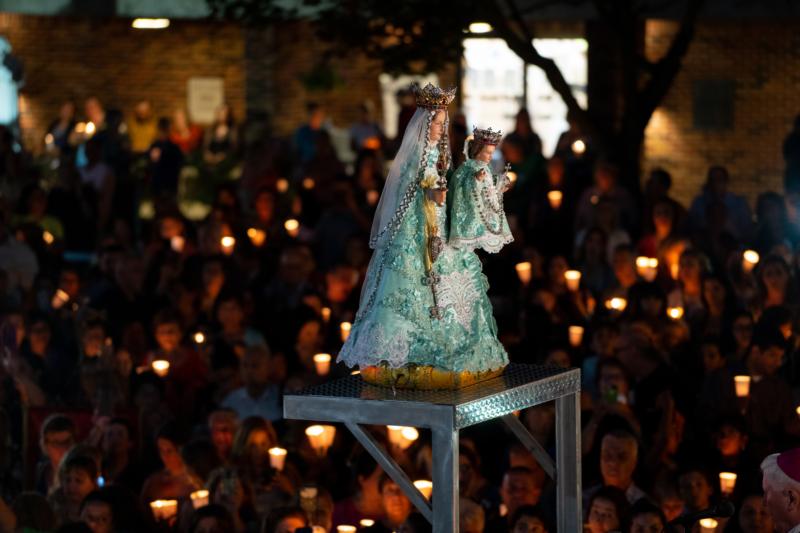 A statue of Our Lady of Consolation is surrounded by pilgrims during a candlelight procession and vigil Mass outside the Basilica and National Shrine of Our Lady of Consolation in Carey Aug.14, 2019. An estimated 5,000 pilgrims, mostly Iraqi Christians, gathered at the shrine for a candlelight procession and Mass on the vigil of the feast of the Assumption. (CNS photo/Katie Rutter)

CAREY, Ohio (CNS) — With its one stoplight and surrounding cornfields, the small Ohio village of Carey seems an unlikely travel destination. Yet, once a year, an estimated 5,000 visitors swell the town population to more than double.

For nine days, climaxing on the evening of Aug. 14, scores of charter buses drop off pilgrims, most of whom are Iraqi Christians. Hundreds of families fill a five-acre plot with tents, recreational vehicles, Middle Eastern food and music.

“We feel that we’re like in our old village back home. Like when I walk around I know a lot of people,” said Khalid Markos, who is now a resident of Sterling Heights, Michigan, but was born in Alanish, Iraq.

His family, like most of the pilgrims, fled from war and persecution in their home country. Now exiled refugees, they have found consolation by celebrating their faith and traditions at the aptly named Basilica and National Shrine of Our Lady of Consolation in Carey.

“We love our faith a lot and as you may know, we left our country because we didn’t want to deny our faith,” Conventual Franciscan Friar Raad Eshoo told Catholic News Service, “and it’s sad that we see a lot of people here and in Iraq there are few Christians, Chaldean Christians.”

The Chaldean Catholic Church, based in Iraq, is one of the 22 Eastern Catholic churches in full communion with Rome. Chaldean Catholics trace their faith back to the second century and still speak Aramaic, the language of Jesus.

In recent decades, however, war and terrorism has caused hundreds of thousands of these Christians to flee their homeland.

The Chaldean American Chamber of Commerce estimates that 160,000 Chaldeans now reside in the Detroit metropolitan area.

“My mother says, ‘Even if someone paid me a million dollars, I wouldn’t go back,’” said Martha Yousif, niece of Markos, whose parents fled Iraq in 1997.

“You can’t guarantee (you will) come back safe,” she related.

“Many things I faced — bombing. In front of my clinic, even,” said Syrian Orthodox Christian Nawar Awbawyvalsheikh, a physician and native of Mosul, Iraq.

“Terrorists. They came to our building to kill us and American soldiers saved us,” she recalled.

These exiled Christians began traveling two hours from Detroit to the Carey shrine about two decades ago. Many were drawn by stories of miraculous healings, others by a devotion to Mary. All are reliving an Iraqi tradition of visiting shrines and holy sites for pious practices and celebration.

“We have a lot of feasts we call them ‘shera,’ (with) a lot of people camping, music, dancing, food, and we end it with Mass and procession,” said Friar Eshoo, who was born in Mosul.

The nine days of celebration in Carey are marked by a constant line for confessions, regular blessings by clergy and several Masses daily, often in Aramaic.

At dusk Aug. 14, the pilgrims carried candles and processed with a statue of Our Lady of Consolation from the basilica to an open field, called Shrine Park. There Bishop Daniel E. Thomas of Toledo presided over an outdoor Mass for the vigil of the feast of the Assumption.

“It breathes a lot of new life into me and I think the friars that come here love to do this,” said Conventual Franciscan Father Thomas Merrill, the shrine’s rector. He was joined by dozens of fellow Conventual Franciscans to help care for the spiritual needs of the pilgrims.

“The people are so hungry for anything that is faith-based and so hungry to practice their Catholic faith and receive the sacraments,” Father Merrill said.

The National Shrine of Our Lady of Consolation was established in 1875 by a priest from Luxembourg and has welcomed regular waves of pilgrims, often immigrants.

The lower church contains three display cases full of crutches and mementos left by those healed or those who want to thank Our Lady of Consolation for a favor received.

“(The Chaldean people have) suffered a lot. They go through a lot of problems. God and the Virgin Mary saved them to come over here and live peacefully,” Markos told CNS.

“Anytime you’re in need of something, you ask for it, she always (provides), especially here,” said Rafa Kattoula, whose family has made a pilgrimage to the shrine for over 40 years.

Expressing gratitude for Mary’s intercession, Kattoula concluded: “We’ve asked and we come and we receive from her.”

NEXT: Face facts, says LCWR official, sisters have been part of abuse scandal