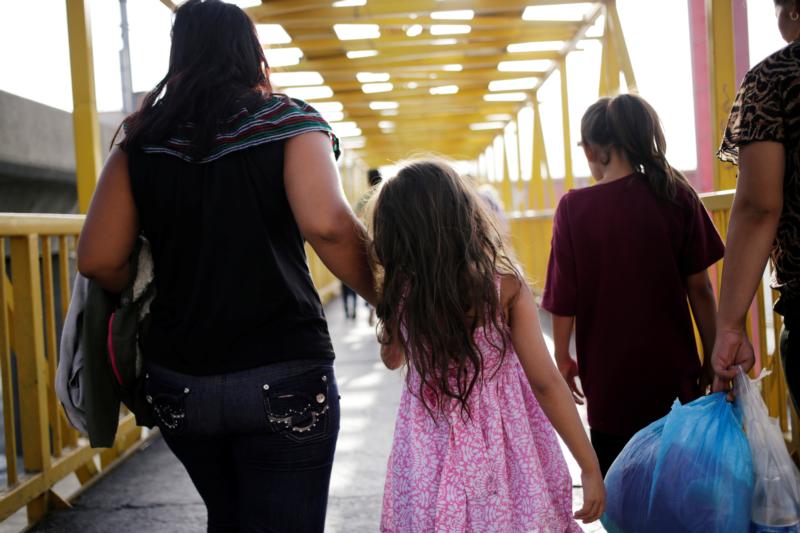 Central American migrants are seen July 31, 2019, returning from the U.S. to Nuevo Laredo in Mexico under the Trump administration’s Migrant Protection Protocols to wait for their court hearing for asylum-seekers in Monterrey, Mexico. (CNS photo/Daniel Becerril, Reuters)

SILVER SPRING, Md. (CNS) — Calling it “a backdoor asylum ban,” more than 250 faith leaders and organizations called for an end to the Trump administration’s policy to turn away asylum-seekers if they don’t first seek protection in countries along their way to the U.S.

“The rule fails to understand or acknowledge the realities of asylum-seekers’ journeys and the lack of options they have been left with,” said the leaders in joint public comment filed Aug. 15 with the Executive Office for Immigration Review. “No one flees their home or country by choice.”

“For those passing through Northern Triangle countries and Mexico, applying for asylum and waiting for a decision from a country that has little or no ability to process such claims may put the asylum-seeker at further risk of harm,” it continued.

A copy of the public comment was released by the Silver Spring-based Catholic Legal Immigration Network Inc., or CLINIC.

The new rule Asylum Eligibility and Procedural Modifications was published July 15 by the Trump Administration.

It “provide(s) that, with limited exceptions, an alien who enters or attempts to enter the United States across the southern border after failing to apply for protection in a third country outside the alien’s country of citizenship, nationality, or last lawful habitual residence through which the alien transited en route to the United States is ineligible for asylum.”

The rule “puts people fleeing for their lives at risk of further harm, is inconsistent with our nation’s historic and moral commitment to human rights and violates existing asylum law,” said the faith leaders.

Two lawsuits have been filed against the new rule; a preliminary injunction quickly blocked it.

“Our country’s asylum laws are based upon the international principle of nonrefoulement — a promise that the United States will not send people back to countries where their lives or freedom will be at risk,” the faith leaders said. “These laws were intentionally designed by Congress to protect the world’s most vulnerable people from persecution. They codify long-standing U.S. principles and our commitment to be a beacon of hope for those in need of safety and security.”

Citing the Torah, the Old Testament and Quran, the leaders said their call for the rule to be dropped “is rooted in morality, humanity, and the teachings of our faiths: We must welcome, protect and offer hospitality to those in need.”

Among the Catholic organizations that signed on to the comment were CLINIC, the Cabrini Immigrant Services of New York City, the Capuchin Franciscan Province of St. Mary, Pax Christi USA, several diocesan and archdiocese Catholic Charities agencies, several orders of women religious as well as individual religious sisters, rabbis and ministers.

PREVIOUS: Florida governor asked to spare life of man set to be executed