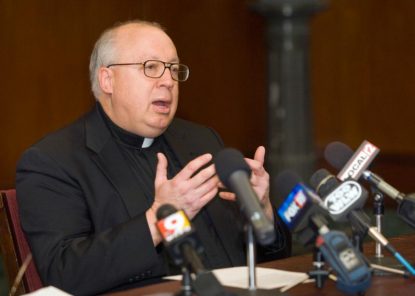 Cincinnati Auxiliary Bishop Joseph R. Binzer is pictured in an April 5, 2011, photo. The Cincinnati Archdiocese announced Aug. 5, 2019, the bishop will no longer oversee priest personnel matters after the mishandling of an abuse allegation against a pastor. (CNS photo/Colleen Kelley, Catholic Transcript)

CINCINNATI (CNS) — During Mass the weekend of July 27-28, it was announced at Masses that Father Geoff Drew, pastor of St. Ignatius Parish in Cincinnati, is on administrative leave.

No further details were provided, which left many feeling frustrated.

On July 29, parishioners attended a meeting at St. Ignatius where archdiocesan officials revealed that Father Drew had allegedly engaged in behavior that violates the archdiocese’s Decree on Child Protection — although no allegations of sexual abuse or criminal activity had been reported at that time.

The gravity of this incident was underscored by the revelation just over a week later that this was not the first time Father Drew’s behavior had been reported to the archdiocese. Two separate reports were written in 2013 and 2015 about the priest’s behavior while he served as pastor at St. Maximilian Kolbe Parish in Liberty Township.

The reports from those time periods included allegations that Father Drew gave uninvited hugs, shoulder massages, leg pats above the knee and made inappropriate sexual comments about their bodies and appearances to teenage boys.

Despite these allegations, Father Drew remained in active priestly ministry and was eligible to apply for parishes with open listings. In 2018, St. Ignatius Parish was in need of a new pastor, and Father Drew applied for the position.

His assignment was made with the recommendation of the Priest Personnel Board, but at that time, the board and Cincinnati Archbishop Dennis M. Schnurr were unaware of the priest’s alleged past transgressions.

Those reports were held by Auxiliary Bishop Joseph R. Binzer in his capacity as director of priest personnel. Upon receiving the information, he spoke with Father Drew on two occasions and received assurances that the behavior would cease.

Following the recommendation of the prosecutor’s office, Father Drew was told to restrict his involvement with St. Ignatius School during the investigation, and he was assigned a “monitor” with whom he would have regular accountability meetings.

No one informed the school principal of this restriction, and, ultimately, this approach proved inadequate, as Father Drew continued his contact with the school.

“Our acceptance of this recommendation, combined with inadequate oversight, was obviously ineffective and a mistake, and we will not repeat it,” said Mike Schafer, archdiocesan director of communications and mission promotion.

Despite a civil investigation that showed no criminal activity, Archbishop Schnurr did not feel the results were adequate to exonerate Father Drew. The archdiocese began its own investigation into the priest’s behavior with Strategic HR, a company hired by the legal firm that represents the archdiocese.

This investigation found no criminal behavior but recommended that the archdiocese provide Father Drew with professional and targeted counseling, which he began in June 2019.

Archbishop Schnurr removed Father Drew as pastor of St. Ignatius July 23, placing him on a leave of absence and ordering him to undergo comprehensive physical, psychological and spiritual evaluation at an independent, in-patient treatment facility outside of the Archdiocese of Cincinnati. This process could take months.

On Aug. 5, the archdiocese announced it has removed Bishop Binzer as director of priest personnel and from his position on the Priest Personnel Board, because he withheld information about Father Drew. Additionally, Bishop Binzer served on the Child and Youth Protection Committee for the U.S. Conference of Catholic Bishops and has since resigned.

Even though Bishop Binzer did not report the 2013 and 2015 reports on the priest to the archbishop or the priest personnel board, “in both instances, the concerns reported to the (archdiocesan) central office were promptly forwarded to the Butler County Prosecutor’s Office and Butler County Children’s Services,” archdiocesan officials said.

In explaining why the archdiocese undertook its own investigation of Father Drew’s behavior, Archbishop Schnurr said: “In the past, if investigators found that there was no criminal activity, the issue was dropped. In light of what I saw being reported relative to (former Cardinal McCarrick) last year, I knew this action was not enough. The Decree on Child Protection has more boundaries than the behavior simply being noncriminal. We have to also investigate boundaries.”

This series of events has left the people of the archdiocese feeling confused and worried for the future.

The Catholic Telegraph, the archdiocesan newspaper, sat down with Archbishop Schnurr to learn more about how policies and procedures have changed in light of recent events; the future of Father Drew; and what St. Ignatius Parish can expect in regard to new leadership.

To combat incidents like this, the archdiocese has adapted, clarified and instituted a multitude of policies in the central offices, parishes and schools.

Archbishop Schnurr said in the past, protocols for reporting clergy abuse were different from those used to report abuse by laypeople. The director of priest personnel managed any reports about clergy, while the Department of Human Resources handled incidents involving laypeople. Now, HR, in conjunction with the Safe Environment Office, will manage all reports of abuse by both laypeople and clergy.

There will now be multiple sets of eyes and ears on all reports of abuse. Departmental directors will meet weekly with the archbishop to keep him abreast of all important information, including any investigations into abuse. HR will bring all accusations against clergy to the archbishop’s immediate attention, and all directors will follow up in their weekly meetings.

“If there is an allegation with a semblance of truth that comes in against a priest, we will follow the same procedure we have with laypeople,” Archbishop Schnurr said. “The priest will be put on leave, the investigation will take place and we will report it immediately to civil authorities. They will conduct their own outside investigation.”

The archdiocese also has issued a mandatory reporting protocol to all central office employees, including clergy, to immediately report in writing if they receive any information — anonymous or otherwise — regarding a potential violation of the Decree on Child Protection by a cleric to Father Angi, the chancellor, or Joseph Riede, the safe environment coordinator.

The archdiocese named Deacon Tim Helmick as temporary administrator of St. Ignatius Parish. Franciscan Father Dave Kobak will continue as parochial vicar and minister to the pastoral needs of the parish.

Archbishop Schnurr acknowledged the pain this incident has brought to the Catholic faithful of the archdiocese.

“I acknowledge that in the handling of Father Geoff Drew, serious mistakes were made,” he told The Catholic Telegraph. “I apologize for the pain or sorrow that we inflicted on our parishioners as a result. We are determined to make the necessary changes in procedures and personnel so that these mistakes will not be repeated.”

Rinaudo is editor of The Catholic Telegraph, newspaper of the Archdiocese of Cincinnati.

NEXT: Priest at parish near El Paso shooting: ‘Let’s take care of each other’