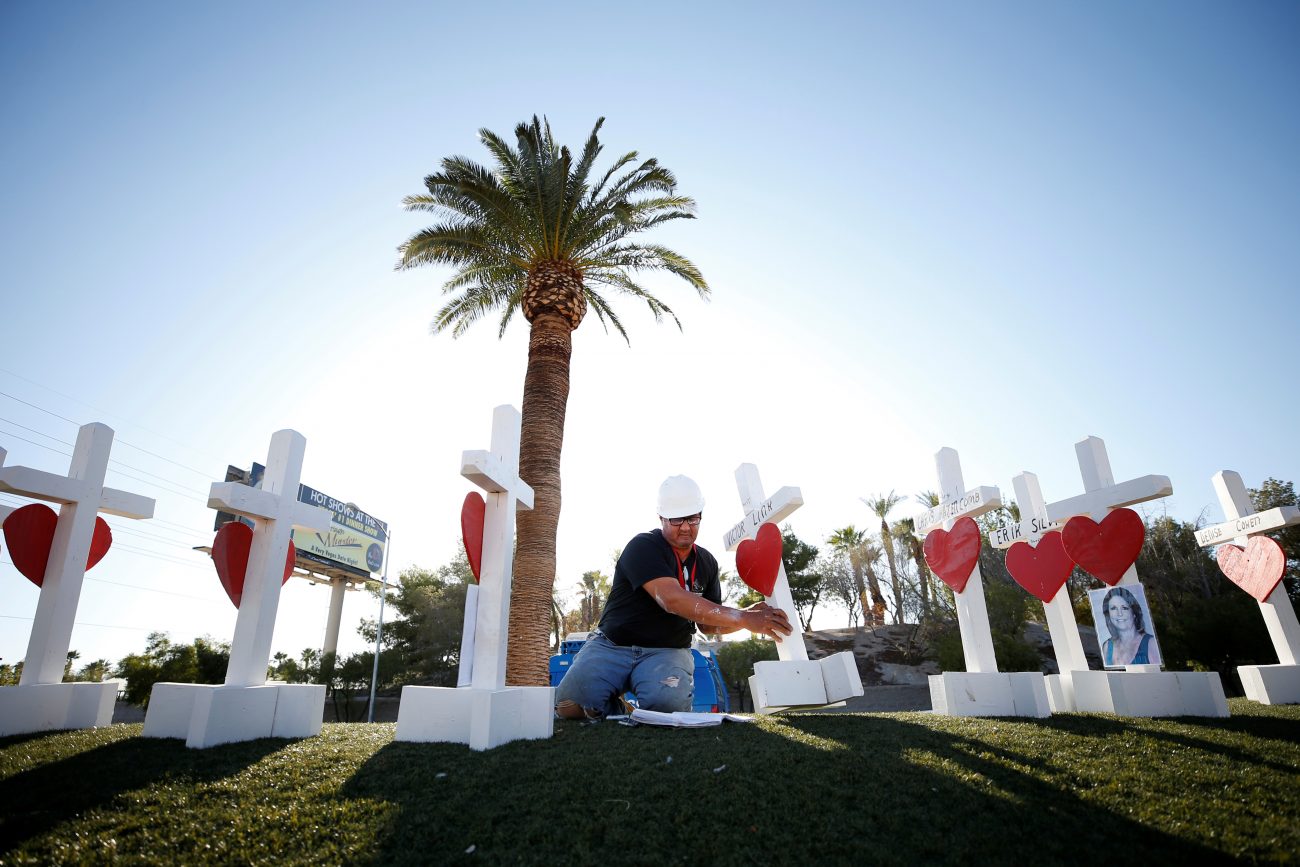 Greg Zanis of Aurora, Ill., works on one of the 58 white crosses he set up Oct. 5, 2017, for the victims of the Route 91 music festival mass shooting in Las Vegas. Zanis has delivered free of charge more than 26,000 wooden memorials at the site of mass murders and other tragedies across the U.S. (CNS photo/Chris Wattie, Reuters)

EL PASO, Texas (CNS) — Greg Zanis, a carpenter by trade from Aurora, Illinois, has traveled around the country for more than 20 years to place white wooden crosses in memory of shooting victims, and after the mass shootings Aug. 3 and Aug. 4 in El Paso and in Dayton, Ohio, his signature crosses are now in those cities.

Zanis, 68, told ABC News the message he wants to send with the crosses is this: “Today it’s the first day they (the victims) get to go to heaven. … they’re not suffering anymore. We’re going to see them again.”

To date Zanis, who retired in 2016, has delivered free of charge more than 26,000 of these wooden memorials to the sites of mass murders and other tragedies across the U.S.

According to his website, he made his first memorial cross in 1996, after finding the body of his father-in-law, who was murdered.

Zanis was a master carpenter by then and worked on house renovations, but finding his father-in-law dead was “the game changer” for him. “Now all that mattered did not matter anymore. That same year, there were car crashes, murders in Aurora, Illinois, and Greg made the first memorial cross,” the site says.

Zanis, a Greek American who is the son and grandson of Greek Orthodox clergy, told ABC News that before he headed to El Paso, he had heard from a family member of one of the victims — she wanted him to make a cross for her brother. But then he decided he didn’t want to go there without having a cross for all the victims — those who were killed and those who were injured. At least 22 died and 26 others were injured.

“Immediately when I heard about it, I made these crosses, I made them fast,” he told ABC News. He drove through the night, arriving in El Paso at about 4 a.m. (local time) Aug. 5.

He has since gone to Dayton, where at least nine people were killed and 27 others were injured.

“We know what it means for someone to extend a hand of love. We love to give you a cross,” says his website. “The crosses are intended to provide comfort.”