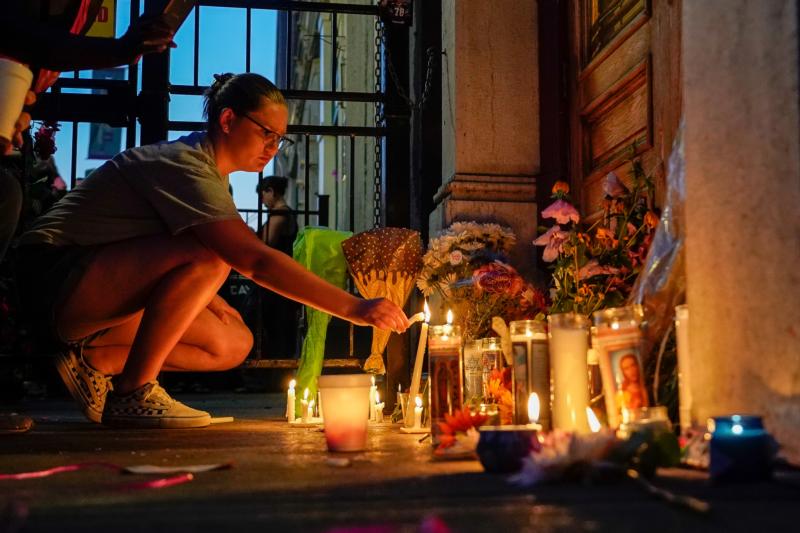 A mourner leaves a candle at the scene of a shooting in Dayton, Ohio, Aug. 4, 2019. (CNS /Bryan Woolston, Reuters)

Nick Cardilino thought he understood solidarity and the human family. Then he woke up to the news Aug. 4 of the mass shooting at a bar in Dayton’s Oregon District and remembered that his son had been a few blocks away, at a baseball game, the night before.

“As you can imagine, I panicked,” said Cardilino, who serves as associate director of campus ministry and director of the Center for Social Concern at the Marianist-run University of Dayton. He texted his son right away and thought, “If he doesn’t reply to me in five minutes, I’m going to call him and wake him up.”

His son texted right back, to Cardilino’s great relief, but an hour later, he found himself sobbing. He was now in solidarity with his brothers and sisters in a litany of U.S. communities impacted by mass shootings, including El Paso, Texas, not 24 hours earlier.

“I wish I had gone there first,” he said of how he didn’t immediately think of other communities, but thought first of his own kids, then his students and his community. “I found myself kind of moving out from my own personal situation,” he told National Catholic Reporter.

Cardilino said the experience put him in touch with how desensitized he’s become to the endless news of mass shootings.

“The longer it goes on, the more I’ve become desensitized, and so I was kind of shocked in some ways at how personal this became, because it happened in my backyard,” he said. The physical distance of other affected communities, he noted, “enables us to be not only physically distant but also somehow psychologically distant. And when it keeps happening over and over again, it makes us even more distant.”

Sara Seligmann, regional director for the Dayton-based Catholic Social Action Office of the Cincinnati Archdiocese, said people have told her they’re surprised by how numb they feel, again largely due to the frequent nature of mass shootings. She observed that other bad news in Dayton in recent months, such as a Ku Klux Klan rally and devastating tornadoes, have left the city “feeling beaten down.”

“You need to comfort the community,” Seligmann said, “but recognize this is no longer a freak thing. This keeps happening, and we need to figure out how to make it stop happening and treat it like the life issue that it is, because people keep getting killed.”

Cardilino agreed about the need for action and said that while watching former Ohio Gov. John Kasich on television, he found his own anger reflected in Kasich’s words, particularly when he said nobody talks about policy fixes in the aftermath of a shooting, letting the issue fade. He is convinced things are “not going to change unless people are marching in the streets.”

This is something Precious Blood Sister Jeanette Buehler knows a lot about. She has been part of an effort to lead prayer vigils marking homicides in Dayton for the past decade, a practice that has commemorated nearly 530 deaths. She participated in a larger vigil, put on by the city Aug. 4, where Ohio Gov. Mike DeWine spoke, and the crowd responded with a chant of “Do something!”

“I think we kind of hate to say it’s a political issue, but there are definitely political implications here. I keep wondering what is going to be the final tipping point that’s going to say to us, as people, this really is enough and we are going to do something, and we’re going to insist that our Congress does something,” Sister Buehler said.

“We can keep talking among ourselves. We can keep holding prayer vigils, and we have to trust that the work of God is going to be brought to completion. But at the same time, we do have to do something ourselves,” she said.

The woman religious stressed the importance of stepping out of one’s comfort zone and building relationships with people who are strangers. “I think it’s something we want to do something about, but it’s so much easier to come together when something terrible happens,” she noted.

Cardilino said he hopes his students take up the push for commonsense gun laws — including greater care and funding for people with mental illnesses — when they return for the semester, provided that the issue hasn’t faded when school starts again.

“Our students are constantly surprising me with their compassion and with their ingenuity and creating new things,” he said.

Seligmann of the Cincinnati Archdiocese sees political action as a natural and necessary part of a Catholic response to tragedy.

PREVIOUS: Teen who died saving classmates in Colorado school shooting made a Knight

NEXT: ‘Crosses for losses’ aim to bring comfort at scenes of mass shootings