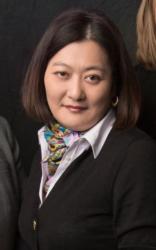 WASHINGTON (CNS) — The U.S. Conference of Catholic Bishops in Washington has appointed Chieko T. Noguchi as director of the Office of Public Affairs at the conference’s headquarters in Washington.

For the past 10 years, Noguchi has been with the Archdiocese of Washington, serving as director of media and public relations since 2011.

“Chieko brings an extensive blend of church and private sector experience to the conference’s communications mission,” he said in a statement. “We are looking forward to working with her to carry the bishops’ Gospel witness into the public square.”

Before working in the archdiocese, Noguchi worked on Capitol Hill, coordinating the logistics of travel for Newt Gingrich while he was Speaker of the House. After Gingrich retired from Congress, Noguchi went to work for Ketchum PR and then the White House Writers Group.

In a 2017 interview with the Catholic Standard, Washington’s archdiocesan newspaper, she said that while she enjoyed the work she was doing, she felt something was missing, and jumped at the opportunity to become the assistant director of communications for the archdiocese in 2009 and director of media and public relations in 2011.

“I haven’t looked back since then,” she told the newspaper. “I love what I do.”

In 2016, she received the Benemerenti Medal from Pope Francis in recognition of her dedication to the church. Noguchi was part of the archdiocesan team that handled media relations during the pope’s trip to Washington in 2015.

At the USCCB, she succeeds Judy M. Keane, who held the public affairs post for about three years.

Noguchi is a graduate of American University in Washington and is raising her family in Virginia.