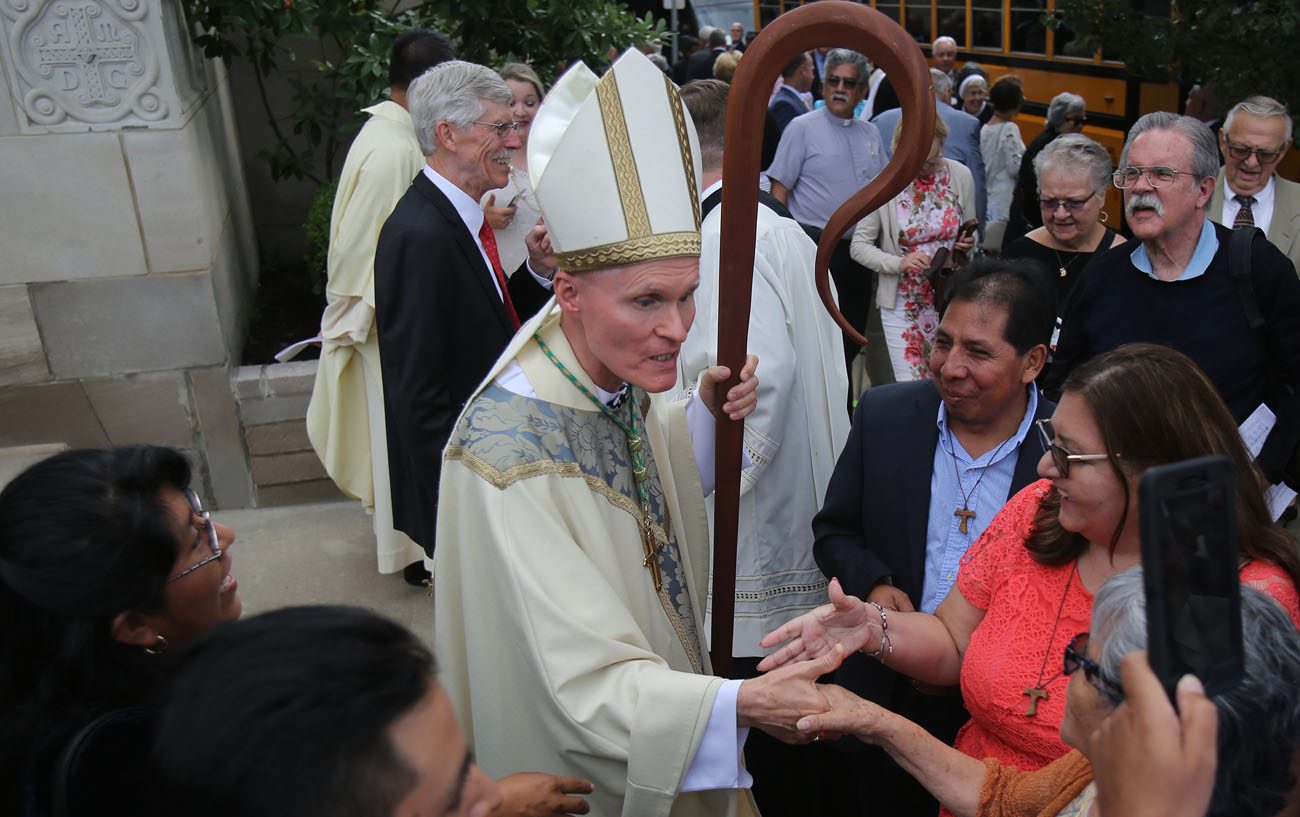 WHEELING, W.Va. (CNS) — People from around the Diocese of Wheeling-Charleston already have a good feeling about their new shepherd, Bishop Mark E. Brennan, who was installed Aug. 22 as the ninth bishop of the diocese.

Ron and Jenny Gaither came from Fairmont, southwest of Morgantown, for the installation of the bishop because they believe he is an honest and holy man. The parishioners of St. Anthony in Fairmont said they were hoping to get someone who could help Catholics in West Virginia forget about the scandals in the church. They said they had heard from priests who already met Bishop Brennan that he is a wonderful man.

John Neely of St. John Neumann Parish in Marlinton, a town with a population just over 1,000, said he hopes the bishop will be concerned with the rural parts of the state. “It’s very important to get someone down to the parishes,” he said, noting that they haven’t had bishops visit in 20 years.

Many of the priests in the rural areas serve three or four parishes. “Our pastor has an hour (to drive) to each of his other churches,” Neely said. “They do everything for themselves; they don’t have an office staff.”

He said he wants Bishop Brennan to be “a man of the people and for the people — the poor people of the diocese.”

Father John Chapin Engler Jr., is one such pastor of three parishes in a rural part of the state northwest of Charleston.

Before solemn vespers Aug. 21, Father Engler said, “It’s a new day. I’m just thrilled” with the appointment of Bishop Brennan. He said the people of the diocese had been praying a prayer provided by Baltimore Archbishop William E. Lori, who was apostolic administrator of the diocese from September 2018 until Bishop Brennan’s installation.

The people of the diocese prayed for a humble and noble pastor full of zeal and a love for Jesus and the poor. “It’s almost like he knew when he wrote it” the kind of man the pope would appoint.

He praised Bishop Brennan for showing up in his own Ford Taurus, carrying his own bag and serving breakfast at Wheeling’s Catholic Charities Aug. 21.

Father Engler’s country parishes in Bancroft, Nitro and Dunbar are small — 30, 50 and 70 parishioners. He said their needs are the same as many others in the diocese, “to continue to try to be a light for people in darkness.”

Noting that the state is about 4% Catholic and “that means 96% are not,” Father Engler said of the new bishop: “He seems to have a knack for reaching out, with a pastoral zeal for the poor.”

He said the bishop had already agreed to visit his three parishes for their combined Labor Day picnic. That sends a good message to his people that they won’t be forgotten, he said.

Sam and Karen Gross came from the Basilica of the Sacred Heart Co-Cathedral in Charleston, where Sam is a fourth-degree Knight of Columbus and participated in the honor guard at the installation Mass.

“He’s a fresh change,” Sam said, noting that Bishop Brennan’s crosier is made of wood, not gold.

Karen said she believes the bishop will help heal and end the divisiveness in the church and “bring a spiritual message to us so we can all be disciples of Jesus Christ.”

The Grosses also mentioned the challenges of life in the diocese, noting that priests in rural parishes have needs that parishioners in Charleston, Morgantown and Wheeling cannot even imagine.

She said the bishop is humble and approachable. “You can tell by his demeanor that he puts others ahead of himself,” she said. “Jesus brought him to us for a reason.”

Morgan Yost, who works for the Diocese of Wheeling-Charleston on the program staff of the youth ministry office, said she hopes the bishop will see the youths as part of the church community now, not just in the future, and hopes he will see that they have a role in the church.

She said the bishop sent a video message to a Catholic summer youth camp held in Huttonsville shortly after his appointment was announced July 23. In that video, he said he hoped to be able to visit the camp in person next year.

Lia Salinas, director of Hispanic ministry for the Archdiocese of Baltimore, attended the installation Mass to honor her former boss. Bishop Brennan had been archdiocesan vicar for Hispanics; he was a Baltimore auxiliary bishop until his appointment to Wheeling-Charleston.

“He’s a pastor who smells like his sheep. We’re sorry to lose him but we know this is what West Virginia needs,” she told the Catholic Review, Baltimore’s archdiocesan media outlet.

“He’s a person you grow to love, a real servant of God,” Salinas said.

She described the bishop as hard-working and a people person, noting that he will spend as much time talking to a janitor as with a clergyman or a business executive.

That attitude was visible after the installation Mass when Bishop Brennan standing on a small balcony on the corner of the cathedral blessed the crowd gathered on Eoff Street below. Returning to the street level, still in his liturgical vestments, the bishop crossed the street to greet residents of the Formosa Apartments who had been sitting on chairs in front of their building.

Yvette Smith, Zyanne Hamlin and Kiara Moore, who live in the building, and Carrie Chambliss, who lives around the corner, were pleased to meet the new bishop, whose cathedral directly faces the apartments.

Smith said she hopes the church opens more doors and helps the homeless and others in need, like those who live in the Formosa.

Chambliss added that maybe they could use some prayers too, “because we’re all sinners.”

“I expect good things from him,” she said.

NEXT: The Real Presence: What do Catholics believe and how church can respond