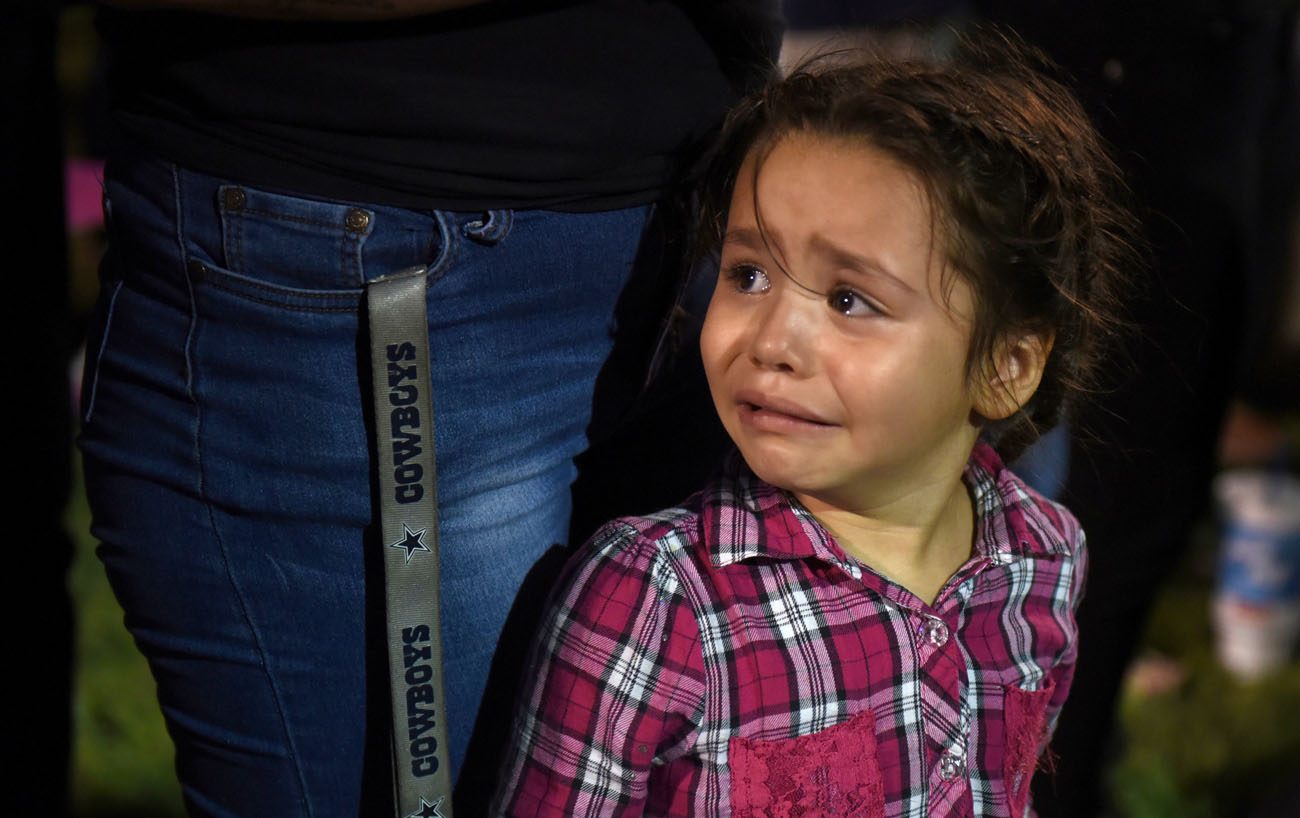 Serenity Lara cries during an Aug, 4, 2019, vigil, a day after a mass shooting at a Walmart store in El Paso, Texas. (CNS photo/Callaghan O’Hare, Reuters)

UPDATED – WASHINGTON (CNS) — The bishop of El Paso, Texas, met with the families of those who were killed and wounded during the Aug. 3 shooting at a Walmart in the city where he serves, and in a statement following the meeting said his heart “was breaking,” after seeing up-close the human aftermath of the crime.

“As a minister I am called to be present to those who suffered this attack and to their families. I need to do so with a sense of composure,” said Bishop Mark J. Seitz in the statement. “But as I visited with victims and those they love, my heart was breaking within me. Their questions are mine as well. Why the innocent children? Why the mothers with babes in their arms? Why should any human being ever be subjected to such violence?”

By early Aug. 5, the death toll had climbed from 20 to 22 reported fatalities and 26 injured from what is, so far, the eighth-deadliest mass shooting on U.S. soil.

Cardinal Pietro Parolin, Vatican secretary of state, conveyed a personal message from Pope Francis to Bishop Seitz saying the pontiff was “deeply saddened to learn of the tragic shooting” in El Paso. The pontiff assured all those affected by the attack of “his spiritual closeness” and “prays that Almighty God may grant eternal rest to the dead and healing and consolation to the wounded and those who grieve.”

“With the hope that harmony and fraternal solidarity may always prevail over violence, Pope Francis invokes upon all of you the divine blessings of peace and strength,” said the cardinal’s message. The text was released Aug. 5 by the El Paso Diocese.

Bishop Seitz participated in an Aug. 4 evening vigil for the victims with other faith leaders as part of the InterFaith Alliance of the Southwest, less than a mile from where the shooting took place, the local El Paso Times newspaper reported on its website. Gathered with members of the Jewish community as well as of other faiths, Bishop Seitz and other Catholics from the diocese lit candles and prayed for the victims.

Authorities have Patrick Crusius, 21, who is suspected of the crime, under custody and expect to soon charge him. Several news organizations said local and federal authorities are investigating whether the shooting was a possible hate crime since the suspected gunman may be linked to a manifesto that speaks of the “Hispanic invasion” of Texas. If that’s the case, authorities could ask for the death penalty.

“We are treating it as a domestic terrorism case,” said John Bash, the U.S. attorney for the Western District of Texas, during an Aug. 4 news conference. “We’re going to do what we do to terrorists in this country, which is deliver swift and certain justice.”

In various news shows and in his statement, Bishop Seitz concentrated on the example of Jesus as a way out of the divisions that many believe led to the killings.

The residents of El Paso, a border city with a long history of brotherhood with neighboring Mexico, has set an example for others to uphold, said the bishop.

“In the last several months, the borderlands have shown the world that generosity, compassion and human dignity are more powerful than the forces of division,” he said in the statement. “The great sickness of our time is that we have forgotten how to be compassionate, generous and humane. Everything is competition. Everything is greed. Everything is cold. Tenderness and the love that knows no borders are crucified in a whirlwind of deadly self-seeking, fear and vindictiveness.”

Because of similar evil forces, God sent Jesus into the world, and when it appeared that evil had won after his crucifixion, Jesus proved otherwise, Bishop Seitz said.

“This is my hope for all who have suffered this violence today and for our community,” he said. “The Christ who suffered is in our midst. He is our companion. We trust he will raise up the fallen, bring healing to the victims and console our broken community.”

El Paso, too, will rise above the “terrible” bloody day, he said,

“Today let us mourn the dead and pray for them. Tomorrow let us recommit to love. And let us all brace ourselves for just action that will overcome the forces of division and build a more loving society,” he ended.