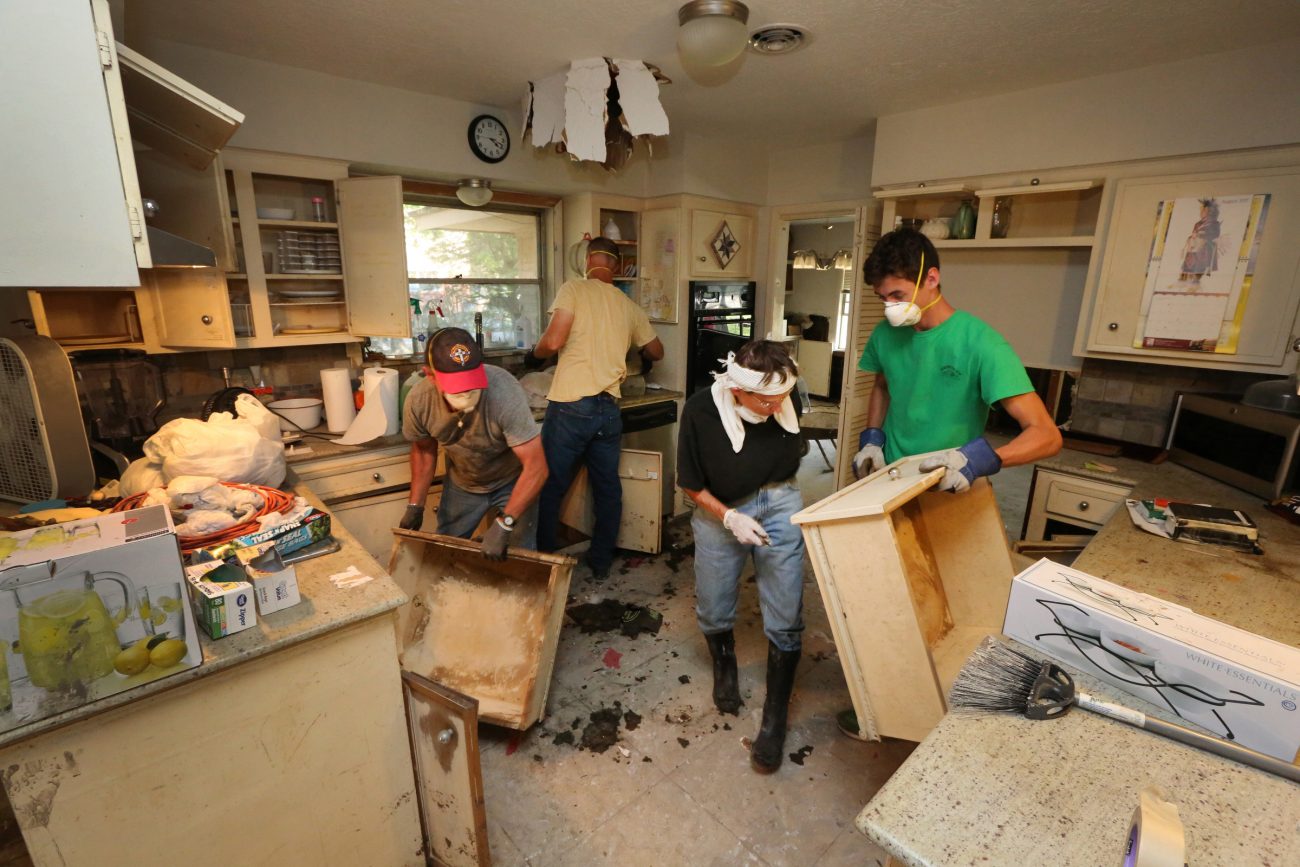 Janice Evans, center, works alongside members of the Knights of Columbus as they rip out waterlogged sections of the kitchen area of her home Sept. 6, 2017, in Dickinson, Texas, in the aftermath of Tropical Storm Harvey. The Knights of Columbus, a 1.9 million-member Catholic fraternal and charitable organization, announced July 31, 2019, that it gave $185.7 million to charity and donated 76.7 million hours of hands-on service in 2018. (CNS photo/Bob Roller)

The New Haven-based Catholic fraternal organization announced its charitable activity over the last year in a July 31 news release, issued ahead of its annual Supreme Convention in Minneapolis Aug. 6-8.

The Knights of Columbus, which has a membership of more 1.9 million, said its charitable activity is threefold: fundraising by the national organization and local Knights councils; community service; and revenues from its insurance and annuities portfolio.

Using Independent Sector’s valuation of a volunteer hour for 2018 — $25.43 — the Knights’ service hours came to $1.9 billion, the release said. The value of this work combined with the year’s monetary donations brings the total value of the Knights’ charity to nearly $2.1 billion.

“Regardless of how or who the Knights serve, it’s the chance to help those who are unable to help themselves and to be of assistance to the sick or disabled that is at the heart of what being a Knight is all about,” Knights of Columbus Supreme Knight Carl A. Anderson said in a statement.

The release noted that the Knights’ charitable activity is carried out by more than 16,000 councils in nine countries, which raise funds for a variety of causes, including efforts to protect and provide relief to persecuted Christians, pro-life initiatives and disaster aid and recovery.

Volunteer time donated by the councils’ members goes to helping their own parishes and communities and to organizations such as Special Olympics and Habitat for Humanity. They give time to Knights-sponsored efforts, including “Coats for Kids,” “Food for Families” and scholarship programs.

Beneficiaries of money raised by Knights include local pregnancy support centers, seminarians, and veterans and service members who make the Knights’ annual pilgrimage to Lourdes, organized in conjunction with the U.S. Archdiocese of the Military Services.

Other charitable funds come from the Knights of Columbus Insurance arm: Once the company’s revenue is used to cover operational costs and refunds (dividends) to its members, “the remaining profits are directed to charity,” the news release said.

The Fortune 1000 insurance company has 1,207 agents, who also are Knights, and it sells a portfolio of insurance and annuities products to its members.

NEXT: Circle of Protection members, others see much to like in budget deal