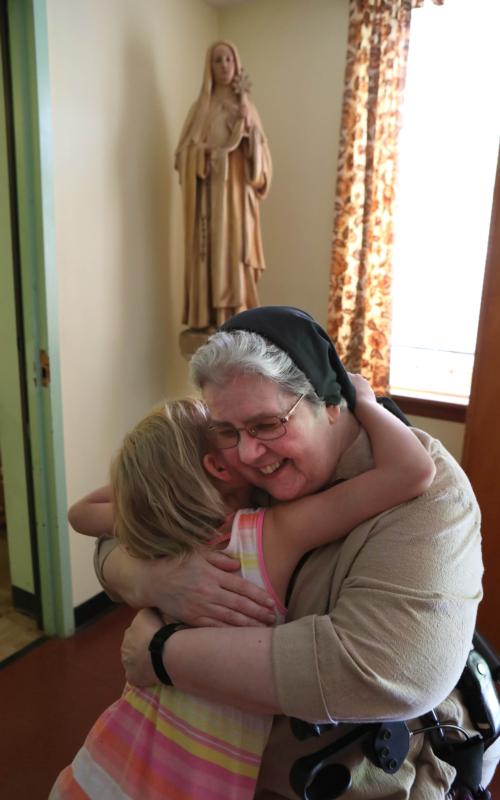 Sister Mary Marguerite says goodbye to Emma Bills, 7, who was attending the last public Mass Aug. 11 2019, at the Monastery of St. Clare in Memphis, Tenn. This, the last contemplative monastery in Tennessee, will close. The number of Poor Clares has dwindled to four, and these sisters will go to other communities. (CNS photo/Karen Focht)

MEMPHIS, Tenn. (CNS) — Concealed behind tall brick walls and strong iron gates in a struggling Memphis neighborhood, nuns have been quietly praying for the city and its people since 1932.

Few people have been behind the walls of this monastery. The silent and prayerful lives of the women, who have chosen to live here in community, remain a mystery and a curiosity to most outsiders.

But they do have friends. The many friends of the Monastery of St. Clare, are a loyal group of followers who have supported them in every way you can imagine, only asking for prayer in return.

In a neighborhood that is plagued by crime and residents fighting to climb out of poverty, these women have chosen a life that St. Clare called the “privilege of highest poverty.” The nuns rely on their friends for generosity, food, donations and even occasional help around the monastery.

They have been called to a life of prayer and silence. To live in community and in radical poverty.

The day they celebrated the feast of St. Clare, which is Aug. 11, the sisters were applauded for all the fruits of their prayer during their last public Mass for the Catholics of Memphis. The chapel was full; it was standing-room only.

“In these past 87 years, the community began to dwindle,” explained Franciscan Father Albert Haase during that Mass.

He shared the nuns’ process of discernment with the worshippers in attendance. Gradually their community has gotten smaller and smaller; they prayed and asked, “What does God want from us now?” Each of them came to realize, “their mission here is complete,” he said, “but their vocation goes on.”

Choked up, finding it difficult to get out the words that she had planned to share, Sister Marguerite said: “We are leaving, but we will continue to pray for you and you will always be in our hearts.”

She looked into the faces of the husbands, wives, children and elderly that she had spent a lifetime praying for, but she was unable to say more.

This, the last contemplative monastery in Tennessee, will close. The number of Poor Clares has dwindled to four, and these sisters will go to other communities.

This move comes after the Vatican released an instruction in May 2018 with new norms for contemplative orders of nuns, encouraging cooperation among their monasteries and outlining procedures for communities left with only a few members.

At a news conference on the instruction, Archbishop Jose Rodriguez Carballo, secretary of the Vatican Congregation for Institutes of Consecrated Life and Societies of Apostolic Life, told reporters that one of the most significant changes in the document requires a monastery or contemplative community of women religious to have at least eight professed religious women in order to maintain their autonomy.

PREVIOUS: Religion, state of the church among topics at annual Napa conference

NEXT: Marian apparition claims in Texas not endorsed by diocese, local bishop