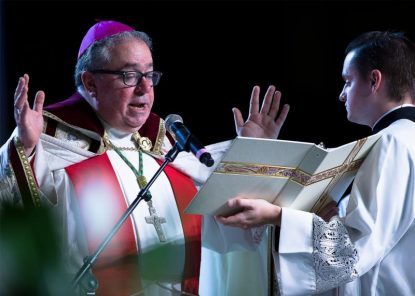 WASHINGTON (CNS) — The Diocese of Fort Worth, Texas, said claims that Bishop Michael F. Olson has authenticated local sightings and messages of Mary are “not true.”

“These claims of apparitions and messages are not verified or endorsed by the church, and in no way are the claims true that the Mystical Rose is a ministry of the Diocese of Fort Worth or of St. Mark” Parish, said the Aug. 8 statement.

It also added: “Bishop Olson does not encourage anyone to offer credence or support for these claimed apparitions.”

A website about the reported apparitions, made by the visionary and others, claimed the first sighting of Mary was May 5, 2017, while she was praying inside Immaculate Conception Church in Fort Smith, Arkansas. All subsequent visions happened at St. Mark Church in Argyle, Texas, hence the name Our Lady Mystical Rose of Argyle. Those appearances — said to have occurred on the 30th of each month from July to December — were in the church’s outdoor courtyard.

The initial seven messages are said to have focused on the sanctity of life. In February of this year, the visionary claimed to have received warning messages from Mary about a cleansing of the church and a “removal of bad shepherds who had taken the place of true shepherds.”

The website said these messages and oral and written accounts of what happened were given to the Fort Worth Diocese.

While the diocese did not give its blessing to these reports, the statement does note “true apparitions” of Mary throughout history.

“While from time to time apparitions do occur (Lourdes, Fatima, Tepeyac) … all true apparitions are simply an appeal to obey the command of Christ: Repent and believe in the Gospel,” it said, referring to Marian apparitions approved by the Catholic Church that took place in Lourdes, France, in 1858, Fatima, Portugal, in 1917 and the Hill of Tepeyac in Mexico City (Our Lady of Guadalupe) in 1531.

The statement also cautioned that one should “assess claims of apparitions and miracles with prudence, always presuming the goodwill of anyone making such a claim but with due regard for the integrity of the Catholic faith.”

Today, nearly 40 years after the initial reports of apparitions of Mary in Medjugorje, Bosnia-Herzegovina, the Catholic Church has not recognized the authenticity of these claims.

This May, the pope lifted the ban on official pilgrimages to the site, but an interim director of the Vatican press office said care must be taken to ensure the pilgrimages are not “interpreted as an authentication of well-known events, which still require examination by the church.”

The pope’s apostolic visitor to Medjugorje, Archbishop Henryk Hoser, retired archbishop of Warsaw, Poland, told KAI, Poland’s Catholic information agency in August that the Holy See’s position on the apparitions there has two aspects: “the pastoral aspect, which is fully accepted, and the doctrinal aspect, meaning study of the apparitions.”