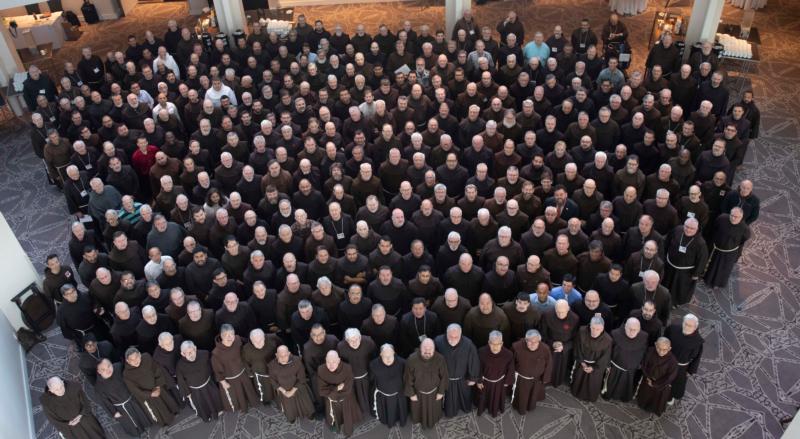 Nearly 400 Franciscans pose Aug. 1, 2019, during a four-day gathering in Denver. It is one of the largest gatherings of Franciscans in the United States, with the purpose of friars getting to know each other as the process of the order’s six provinces become one. The gathering took place July 29-Aug. 2. (CNS photo/Octavio Duran)

DENVER (CNS) — History was made when close to 400 Franciscan friars — from 25 states as well as Canada, Italy Jamaica, Mexico and the Philippines — gathered in unity and fraternity in Denver for the religious order’s “Chapter of Mats.”

The July 29-Aug. 2 meeting was one phase of a process by the Franciscans of the Order of Friars Minor to form a new province out of six of the religious order’s provinces.

Friars in each of those six provinces voted May 30, 2018, to create the new province; they took the vote at meetings in their respective communities.

Revitalization of Franciscan life and ministry in America is the goal of this multiyear process of restructuring that began in 2012 with discussions by the friars of the six provinces — Assumption of the Blessed Virgin Mary Province based in Franklin, Wisconsin; Holy Name Province in New York City; Our Lady of Guadalupe Province in Albuquerque, New Mexico; Sacred Heart Province in St. Louis; St. Barbara Province in Oakland, California; and St. John the Baptist Province in Cincinnati.

“We have much in common with our brothers around the country,” said Franciscan Father Jack Clark Robinson, provincial minister of Our Lady of Guadalupe Province. “This meeting gave us a chance to get to know more about each other and strengthen the bonds that unite us.”

The process of forming one province also includes consideration of fraternal life and mission, as well as the structure of fraternal governance and civil law. The new U.S. province is expected to be officially formed once restructuring is approved by the Franciscan order’s leaders in Rome, possibly by late 2022 or early 2023.

The new province will comprise more than 800 priests and brothers. A location for its headquarters will be determined later.

A seventh U.S. province — the Immaculate Conception Province, also based in New York City — already had decided to not participate in the process.

During the four-day meeting in Denver, 11 men from the six provinces were received as novices, beginning a yearlong program of education and religious training that puts them on the path to life as Franciscan friars.

The worldwide Order of Friars Minor was founded in 1209 by St. Francis of Assisi.

Following the message of Christ and the example of their founder, the friars serve the poor and marginalized and work to further peace and care for creation in a variety of settings including parishes, schools, neighborhood outreach, retreat centers and social justice ministries.

PREVIOUS: Banks holds no resentment for wrongful conviction; he’s focused on others

NEXT: Those on path to legal immigration who use public funds face a roadblock