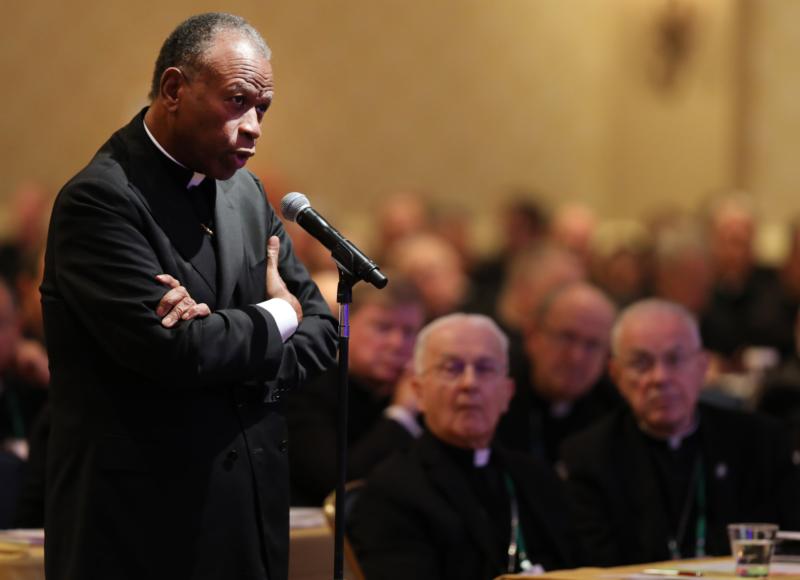 Bishop Edward K. Braxton of Belleville, Ill., speaks from the floor Nov. 13, 2018, at the fall general assembly of the U.S. Conference of Catholic Bishops in Baltimore. (CNS photo/Bob Roller)

BELLEVILLE, Ill. (CNS) — Bishop Edward K. Braxton of Belleville decried “a crisis of gun violence” in the United States and asked Catholics in his diocese to come together to suggest ways to stop it.

“The crisis is caused, in part, by a small number of gun owners who abuse the firearms that are readily available to them and by the lack of consensus on the part of the American people and their elected representatives,” Bishop Braxton said in his message, issued Aug. 6, days after the previous weekend’s mass shootings in El Paso, Texas, and Dayton, Ohio, that left 31 dead and dozens more wounded.

Bishop Braxton said that, in the past, he has asked Catholics in his diocese for prayers for the victims, the survivors, those grieving and for elected officials after noted mass shootings, but “in recent months, I have not written to you because these heartbreaking assaults on the value and dignity of every human life have been happening so frequently that it has not been possible to keep up.”

In his reflection, “A National Crisis: A Pastoral Reflection on the Deadly Epidemic of Gun Violence in the United States,” he added: “According to published statistics, there have been 255 mass shootings — four or more victims — in this country already this year. One hundred people a day and 36,500 people a year die from gun violence.”

Bishop Braxton said, “Like you, I am deeply distressed by the erosion of fundamental moral principles.”

Beyond the erosion of those principles in society, he added, “there is mounting evidence that social media platforms like 4chan and 8chan are being used to create international communities of like-minded people who reinforce each other’s ethnic and racial hatred, encouraging and even applauding acts of violence against those who should be purged from the ‘nation’ as they narrowly define.”

At the same time, he noted, the number of Mexican immigrants has risen in the Belleville Diocese; the alleged El Paso shooter came from the Dallas area, 10 hours by car from El Paso, specifically targeting Latin Americans. “We deplore the fact that our sisters and brothers are sometimes the objects of stereotypes, hateful words, scorn and violent acts. We know their vulnerability and fears due to the lack of comprehensive immigration reform,” he said.

“Words of comfort are not sufficient,” he added. “Soon after these latest shootings, President Donald J. Trump said, ‘In one voice our nation must condemn racism, bigotry and white supremacy. These sinister ideologies must be defeated.’ The president’s critics complained that his own rhetoric reinforces these very attitudes and that his words were not preceded by sincere expressions of regret. Nor have the words been followed by swift and decisive actions to prevent gun violence.”

Solutions, though, have been hard to come by, Bishop Braxton said. “Many Catholics have told me that they truly want to do something. They feel helpless, even paralyzed. They simply do not know what to do. They can see that there are no easy answers or solutions. As your bishop and pastoral leader of a community of people who proclaim publicly that we are the disciples of the Prince of Peace, I share this uncertainty and frustration.”

He advised Catholics not to expect God to intervene in human history to stop gun violence. “Here on earth, God’s work must truly be our own,” he said.

“I am not an expert in social science, psychology, political theory or all aspects of the debate concerning gun violence,” Bishop Braxton added. “I am also very aware that many people believe that there is no crisis of gun violence in this country.”

He asked Catholic leaders — clergy, religious and lay — to establish opportunities to pray for an end to gun violence and to search for solutions to gun violence.

Bishop Braxton also asked Catholics to come together to “listen, learn, think, pray and act regarding the present crisis.”

Groups, he said, can study church teachings, the Catechism of the Catholic Church, the documents of the Second Vatican Council, books about the U.S. Constitution and the Second Amendment, learn the positions on guns from their representatives in Congress, and ask questions of themselves on what they can do to halt gun violence.

“The goal is a Christ-centered conversation, not a quarrel!” Bishop Braxton said.

“It is good to remind ourselves,” he added, “of the words of St. Teresa of Calcutta: ‘When we encounter pain and suffering in the world, our hearts are moved with compassion. We are frustrated when we cannot heal all of the wounds. We may be tempted to give up and do nothing. But everybody can do something! We must do what we can!'”