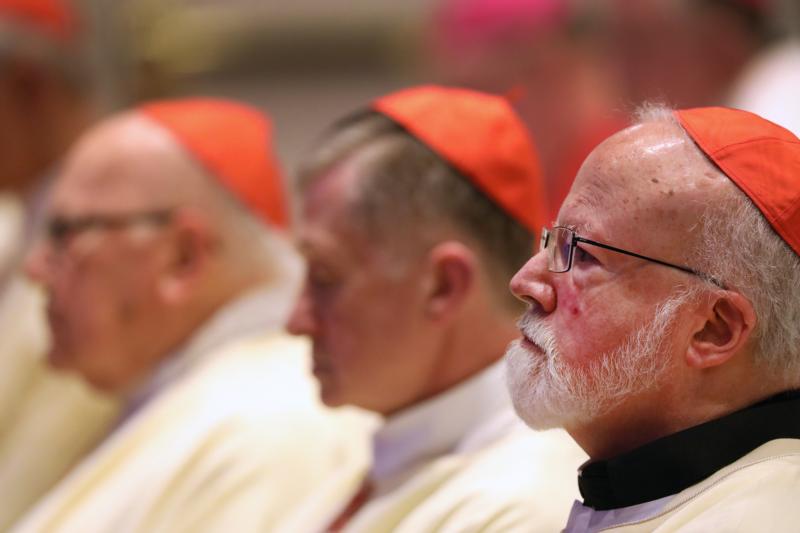 Boston Cardinal Sean P. O’Malley, right, is pictured with Cardinals William J. Levada, retired prefect for the Vatican Congregation for the Doctrine of the Faith, and Blase J. Cupich of Chicago at the spring general assembly of the U.S. Conference of Catholic Bishops in Baltimore June 11, 2019. The dioceses of the Boston Province, led by Cardinal O’Malley, have launched a third-party, independent system to report abuse by Catholic bishops. (CNS photo/Bob Roller)

SPRINGFIELD, Mass. (CNS) — In advance of a mandated national third-party reporting system for allegations or complaints regarding bishops, the Catholic dioceses of four New England states have launched a third-party, independent system to report abuse by Catholic bishops.

The dioceses in Massachusetts, New Hampshire, Vermont and Maine make up the Boston Province, led by Boston Cardinal Sean P. O’Malley, who is the metropolitan archbishop of the province.

The bishops of the province have agreed to make a reporting system available now in the wake of Pope Francis’ document “Vos Estis Lux Mundi” (“You are the light of the world”) and the bishops’ vote during their spring general assembly in June to implement it.

The pope issued the landmark document in May to help the Catholic Church safeguard its members from abuse and hold its leaders accountable.

The “motu proprio” was one of the measures that came out the Vatican’s February summit on clergy sexual abuse attended by the presidents of the world’s bishops’ conferences.

“I am grateful to Cardinal O’Malley for his leadership in implementing this important facet of ‘Vos Estis Lux Mundi’ here in the Boston Province,” Springfield Bishop Mitchell T. Rozanski said in a statement in response to the Aug. 14 announcement of the Boston Province establishing the independent reporting system.

“This is an important step in assuring accountability for bishops in continuing to be vigilant in our church for the safe environment of all our members, particularly our most vulnerable,” he said.

The province includes the Archdiocese of Boston and the dioceses of Fall River, Worcester and Springfield, all in Massachusetts; the Diocese of Burlington, Vermont; Diocese of Manchester, New Hampshire; and the Diocese of Portland, Maine. The last three are statewide dioceses.

The Boston Province bishops’ letter noted the pope’s document “identifies substantive measures to respond to the clergy sexual abuse crisis in the church.”

“This includes requiring all dioceses in every country to establish a public, accessible and reliable system for reporting crimes of clergy sexual abuse and any cover up of abuse by May 31, 2020,” it said. “It also requires the establishment of new procedural norms for investigating crimes by bishops and supreme moderators of religious institutes, including both allegations of sexual abuse and any cover up by way of actions or omissions intended to conceal information or to interfere with investigations.”

The bishops’ letter reviewed the actions the bishop’s took in June, including approving a measure “to establish a third-party national reporting system for allegations or complaints involving bishops in the United States.”

“The system will be designed to receive, via phone or email, confidential information reporting possible violations by bishops. This vote was taken following guidance articulated in Pope Francis’ ‘Vos Estis Lux Mundi.'”

Noting the papal document “allows until May 31, 2020, for the development of local systems to receive such reports,” the letter stated the bishops of the Boston Province agreed that “with the understanding that the implementation of the national system is months away” they would join a program already established by the Archdiocese of Boston through an independent EthicsPoint website.

“Much has been accomplished over nearly two decades to address the clergy sexual abuse crisis in the Catholic Church, including instituting mandatory reporting to civil authorities, protection and prevention training, and pastoral support and outreach for survivors, among other steps,” the letter said. “However, more is required to ensure that there is an effective and independent system in place to report misconduct by bishops.”

The victim/survivors of clergy sexual abuse, along with their families and loved ones, “must always be the central focus of our ongoing response to the sexual abuse of minors,” it continued. “There is no doubt that they have suffered greatly.”

For the Catholic Church “to continue to restore trust and credibility, leadership must be committed to transparency and accountability,” it said. “We hope and pray that this effort will further strengthen the work begun nearly two decades ago to offer healing.”

The website to report and track a submission is: https://bit.ly/33BujD2.

IObserve is the news website of the Diocese of Springfield.