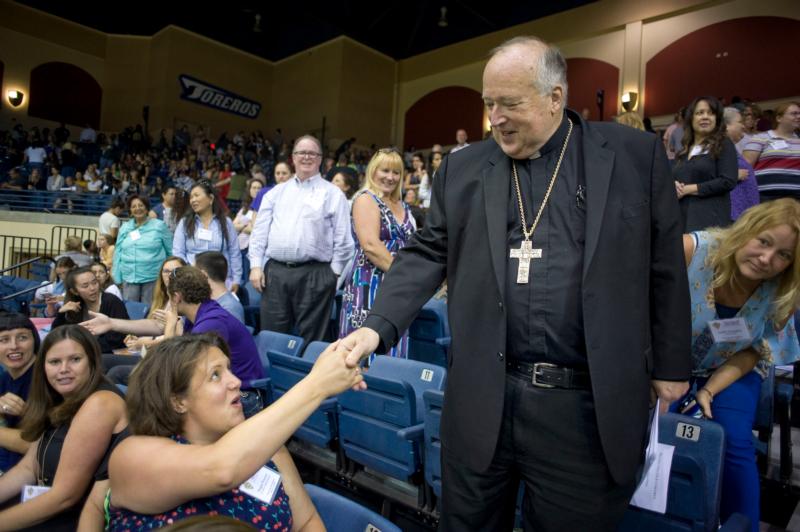 San Diego Bishop Robert W. McElroy greets an attendee during an Aug. 13, 2019, meeting with all of the more than 2,500 San Diego diocesan employees in response to Pope Francis’ call to confront sexual abuse of minors and other vulnerable people. (CNS photo/David Maung)

SAN DIEGO (CNS) — Bishop Robert W. McElroy of San Diego gathered all 2,500-plus diocesan employees for the first time in its history to announce an expansion of the fight against the sexual abuse of children not just within the local church but in the greater society.

U.S. church reforms adopted in the early 2000s have contributed to a dramatic decline in cases of child abuse by clergy. The San Diego Diocese has not had a confirmed incident of sexual abuse of a minor by any of its priests in the past 20 years, records show.

But much more remains to be done to confront abuse, Bishop McElroy told the employees at the Aug. 13 meeting at the University of San Diego.

The bishop said Pope Francis, in a directive issued in May, had challenged bishops worldwide to not merely change procedures, but to commit to personal and institutional transformation to eradicate abuse. Bishop McElroy then outlined his plan to drive that transformation within the diocese.

In his “motu proprio” titled “Vos Estis Lux Mundi” (“You Are the Light of the World”), Pope Francis challenges Catholics to “recognize that while the church’s mission to eliminate sexual abuse must begin with the internal life of the church and the sin and scandal of clergy sexual abuse, our efforts as disciples of Jesus Christ must also reach into those structures of societal and family life that generate and protect the sexual victimization of minors,” Bishop McElroy said.

At the meeting, the bishop:

— Called on every employee of the diocese to report child abuse they suspected was occurring, not just so-called mandated reporters obligated by law to do so, such as teachers and priests.

— Extended the effort to fight sexual child abuse beyond the Catholic Church, calling on all employees to report abuse wherever they suspected it was occurring in the larger society, where most of it occurs.

— Announced the formation of a task force to develop programming to raise awareness among the diocese’s families at schools and parishes of the epidemic of child abuse and what they could do to prevent it and to help its victims to heal.

— Unveiled two new diocesan policies regarding communication and social media to advance the protection of minors. One prohibits all employees, including clergy, from communicating privately with minors they met through their work in the church without copying their parents or guardians on any such communications. The other bans all employees, clergy included, from having direct interaction on any personal social media account with any individual minor they met through their work.

These are the latest measures taken by Bishop McElroy in the past year in the wake of investigations in Pennsylvania and New York, as well as revelations in countries throughout the world, of devastating patterns of clergy sexual abuse of children and systematic cover-ups by bishops for decades.

At the meeting, Bishop McElroy highlighted the moral responsibility each staff member had to fight abuse. The fact that, years later, many co-workers admitted they had seen very troubling indications of abuse but had kept silent was “one of the most tragic dimensions of our history of sexual abuse,” he added.

“The epidemic of sexual abuse of minors thrives because it operates in the shadows,” Bishop McElroy said. “If any of us stand by and do nothing, then the evil of victimization triumphs.”

“We cannot erase the horror of the church’s history, nor can we restore the shattered souls and hearts and lives of those we have been victimized,” he added. “But we can move forward as Pope Francis calls us to, utterly resolved to continually expel the sexual abuse of minors from the internal life of the church, and equally resolved to help transform families and society to purge the epidemic of sexual abuse that rages in our midst.”

Bustos is a contributing writer for The Southern Cross, newspaper of the Diocese of San Diego.

NEXT: Sisters call on Trump to stop ‘divisive and polarizing rhetoric’