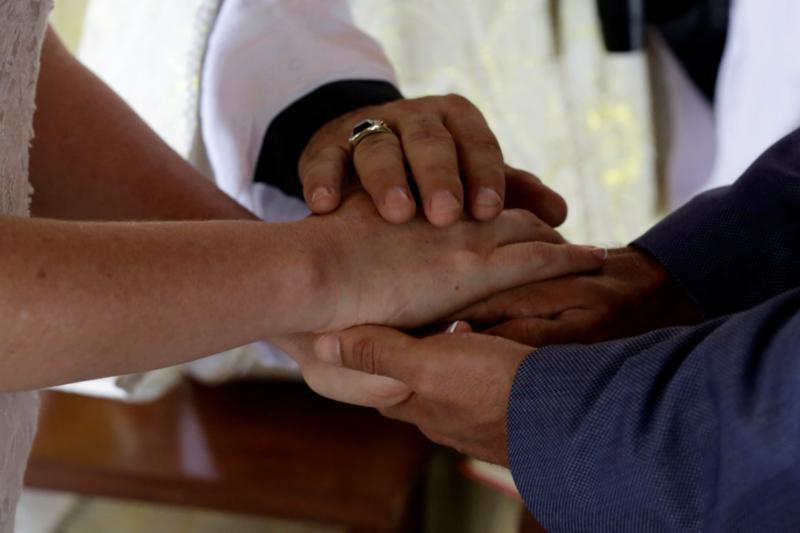 A priest blesses a couple during their wedding ceremony. The Third Option Program was founded in the mid-1980s in Syracuse, N.Y., to save troubled marriages by supporting and mentoring Catholic and other couples to help them address their difficulties. It is now an international program. (CNS photo/Juan Carlos Ulate, Reuters)

SYRACUSE, N.Y. (CNS) — The Third Option Program had its beginnings in the mid-1980s when it was founded by Patricia Ennis to save troubled marriages.

It was operated under the auspices of the Family Life Education Offices of the Syracuse Diocese and now has spread throughout the United States and to foreign countries, including England, Italy, Philippines and Wales.

The catalyst for Ennis to start such a program were the remarks a close friend made to her.

“The first was, ‘Where is the church when you really need the church?”‘ she recalled.

Her friend maintained that while the church teaches marriage is ideally a permanent arrangement, she somehow felt the church wasn’t providing support for her and her spouse when they were experiencing marital difficulties. In fact, the friend felt that if the church had had a support system in place, the outcome to their marital difficulties might have been different.

The second remark that Ennis’ friend made to her was that now and then this friend would meet someone she and her husband knew. And that person would say, “My spouse and I also had some really tough marriage problems, but we’re OK now, and we are praying that matters will work out for you, too.”

So, Ennis, who has a master’s in social work from Syracuse University, concluded hurting couples needed to hear from other couples who had successfully overcome marital difficulties. She called them “Back from the Brink” mentor couples.

Ennis wrote a proposal for a marriage education program and shared it with Father Robert Yeazel, who at the time was her pastor at Immaculate Conception Church in Fayetteville, New York. Impressed with her proposal and seeing it could fill a real need, he encouraged her to pursue it.

The main point of her proposal called for an ongoing support group for hurting couples who would benefit from hearing from the “Back From the Brink” mentor couples, who could provide testimony to their marriage problems, how they had worked them out and were now happily married. In a word, these couples would be a sign of hope.

Her pastor wrote an introductory letter for her to the priest who was then head of the diocesan Family Life Office, Father Joseph Phillips, who holds doctorate from Syracuse University in child and family life studies.

After Ennis received some grant money to put her program in place and she went to work at the Family Life Office. Beyond bringing mentor couples together with hurting she couples, she wanted to give the later couple more practical, concrete help through skill building. She developed 14 workshops to be incorporated into the program.

The Third Option finally came into existence after a four-year process of developing a proposal and getting funding. Since then, the Third Option has grown and expanded and has been continuously refined.

The original grant came from the Raskob Foundation for Catholic Activities, based in Delaware. Half the money was given on a matching basis. Local money came from individual donors and the Knights of Columbus.

Currently, the program is funded by the participants in the program with each couple making a suggested free will offering every other week.

In the beginning to find the “Back From the Brink” mentor couples, she asked pastors and marriage counselors to refer couples to her. She also asked couples who could help hurting couples step forward by placing advertisements in church bulletins. Gradually, such couples began to offer their services.

During each meeting there is time for sharing, for reflection and for goal setting. There also is a half-hour workshop session within the meeting with games and skits and with volunteers from the group to demonstrate concepts, such as self-respect or control. There is a question-and-answer period as well, and the group also breaks for three 10-minute informal periods.

Each evening meeting opens with a spontaneous prayer and closes with the Serenity Prayer, which is generally the prayer used by 12-step support groups.

There are always two “Back From the Brink” mentor couples at each meeting. When couples are new to the Third Option, they receive an orientation from one of the mentor couples.

She has found that each time a marriage is improved as a result of a couple attending the program, the whole family benefits from the improvement.

A typical comment she hears is: “You know we realized our marital difficulties were affecting our children, and we now notice how much better our children are behaving.”

According to Ennis, Third Option participation also helps to break a family cycle of marital problems. If a Third Option married couple’s own parents were divorced, they haven’t learned good relationship skills from their parents.

When a Third Option couples learn new relationship skills at the meetings and begin practicing these skills at home, they’re breaking a generational cycle, she noted.

The Third Option offers a warm caring place for couples to go when their marriage is floundering. Many see it as an oasis of hope in a desert of divorce statistics.

Editor’s Note: For more information about the Third Option, contact Andrea and Mike Buckley at (855) 624-9476 or visit the website www.thethirdoption.com.