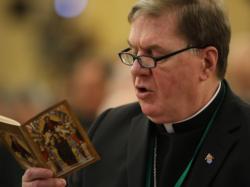 WASHINGTON (CNS) — Cardinal Joseph W. Tobin of Newark, New Jersey, praised Pope Francis for his Aug. 4 letter to priests in which the pontiff expressed “gratitude to all those priests who faithfully and generously spend their lives in the service of others.”

The pope acknowledged the shame and frustration felt by priests who are discouraged by the actions of fellow clergy members who betrayed the trust of their flock through sexual abuse and abuse of conscience and power.

“The Holy Father’s letter to all priests is a most welcome gift, coming, as it does, at a particularly difficult time for the church,” Cardinal Tobin said in an Aug. 7 statement as chairman of the U.S. Conference of Catholic Bishops’ Committee on Clergy, Consecrated Life and Vocations.

In his letter, which commemorated the 160th anniversary of the death of St. John Mary Vianney, patron saint of parish priests, Pope Francis also shared his concern that many priests “feel themselves attacked and blamed for crimes they did not commit.”

“Amid the pain, ugliness and anger, it is possible for the church, and especially those who are priests, to fall into despair — the opposite of hope,” the cardinal said. “Instead, the Holy Father reminds us that we must never lose sight of those ‘luminous moments when we experienced the Lord’s call to devote our lives to his service.'”

He added, “That sort of memory recalls the many moments of gratitude and encouragement offered to us from the Lord and from others.”

Saying he was speaking as a priest and a bishop, Cardinal Tobin thanked the pope for his “wonderful letter to us.”

“While working to protect all of God’s people, especially the innocent and vulnerable, from the evil of the abuse of power, we should not become blind to how the joy and hope of Christ ‘are constantly born anew,'” he added.

Editor’s Note: Pope Francis’ letter to priests can be read in its entirety in English here and in Spanish here.

NEXT: Oregon family ‘awestruck’ Knights named them Family of the Year, says mom