African bishop: Church must work to end violence against albinos 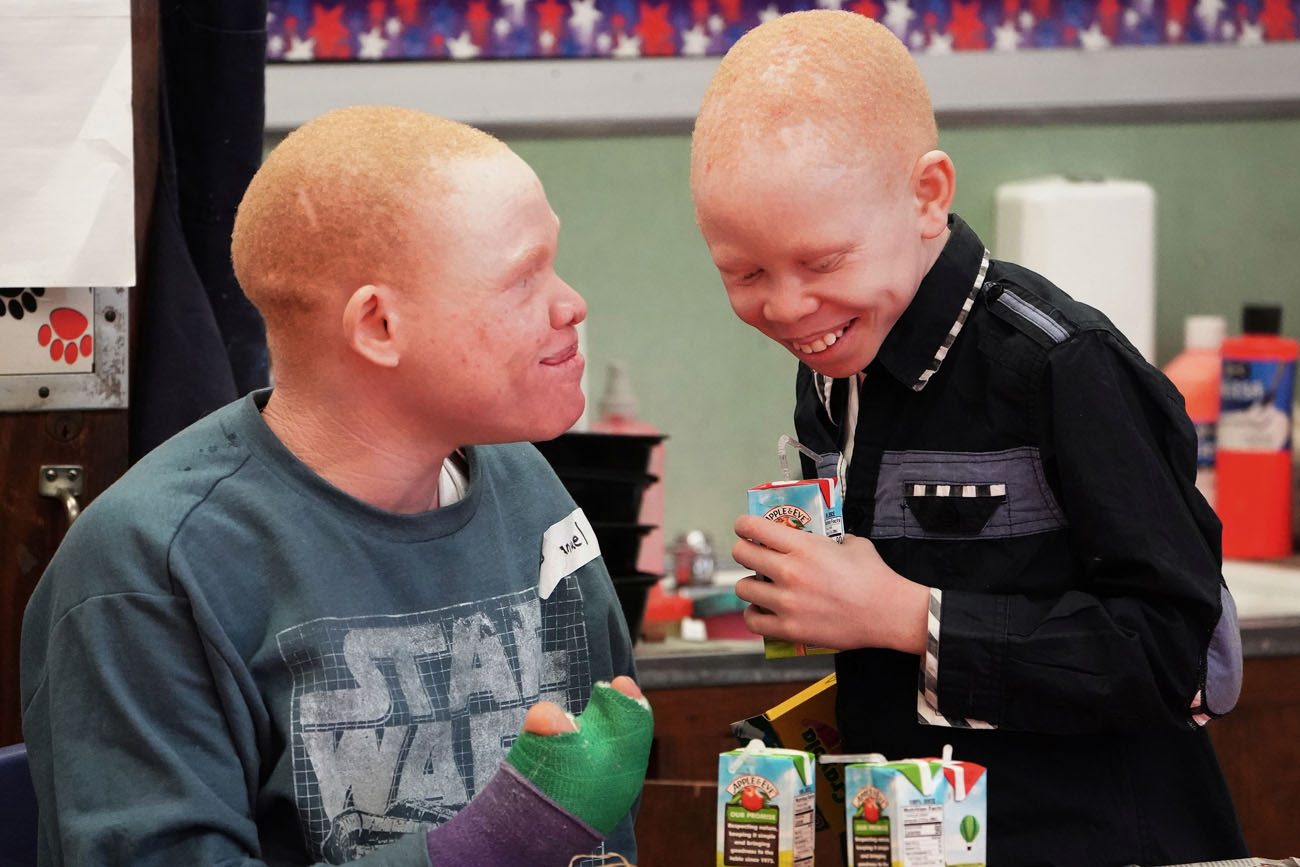 Emmanuel Rutema and Baraka Lusambo, Tanzanian youths with albinism who had limbs chopped off in witchcraft rituals, talk as they take part in an art class in the Staten Island borough of New York City Jan. 28, 2019. The church in Africa must work to end violence against people with albinism through its schools and other education efforts, said Bishop Sithembele Sipuka of Mthatha, South Africa, first vice president of the Symposium of Episcopal Conferences of Africa and Madagascar. (CNS photo/Carlo Allegri, Reuters)

CAPE TOWN, South Africa (CNS) — The church in Africa must work to end violence against people with albinism through its schools and other education efforts, said Bishop Sithembele Sipuka of Mthatha, South Africa, first vice president of the Symposium of Episcopal Conferences of Africa and Madagascar.

The symposium, known as SECAM, condemns “all forms of violence against albinos,” from murders to mutilations to harmful attitudes, Bishop Sipuka said in an Aug. 14 telephone interview.

“It’s the mindset that needs to be changed,” said Bishop Sipuka, noting that superstitions are entrenched.

About 150 people with albinism have been killed for their body parts since 2014 in countries that include Tanzania, Malawi, Mozambique and Congo. With 76 murders, Tanzania reported the highest number of killings, Amnesty International said in an Aug. 14 statement from Johannesburg.

Across southern Africa, albinos “live in fear of being killed or abducted for their body parts,” Amnesty International said.

“These waves of violent attacks are fueled by the false and dangerous myth that body parts of persons with albinism can make someone rich,” it said. The body of a person with albinism can bring many thousands of dollars on the black market.

Albinism is a congenital condition that leaves people without coloration in their skin and hair.

“It is simply a biological condition,” said Bishop Sipuka, who is also president of the Southern African Catholic Bishops’ Conference.

“We need to educate people about albinism in our schools, catechisms and sermons,” he said, noting that “everybody is created in the likeness of God, and we need to acknowledge and protect that.”

He said bishops in countries such as Malawi and Tanzania, where violence against albinos is “most brutal,” have the support of the church in other African countries in their calls for stronger action to end it.

Archbishop Thomas Luke Msusa of Blantyre, Malawi, told a gathering in January that the country’s police must do more to find and stop the markets for the body parts of people with albinism.

Not only physical violence but also negative attitudes toward people with albinism “are totally unacceptable,” Bishop Sipuka said.

Parishes throughout the region should work on encouraging friendships between albinos and others, particularly among the young, he said.

Amnesty International said that, at the heads of state summit in the Tanzanian capital of Dar es Salaam Aug. 17 and 18, the Southern African Development Community “must send a clear message that those who perpetrate these attacks will be brought to justice.”

Leaders of the regional bloc “must tackle the root causes of these targeted attacks,” it said, noting that “it is intolerable that persons with albinism continue to live at the mercy of these criminal gangs.”

To “ensure a coordinated security response” across southern Africa, where there are tens of thousands of people with albinism, Amnesty International called for a regional action plan to be adopted at the summit.

“Criminal justice failures, such as poor handling of cases and evidence, to resolve cases of crimes against persons with albinism have driven the impunity and persistent crimes against this vulnerable group,” it said.

NEXT: Church-backed petition has 1 million-plus names seeking elections in Congo