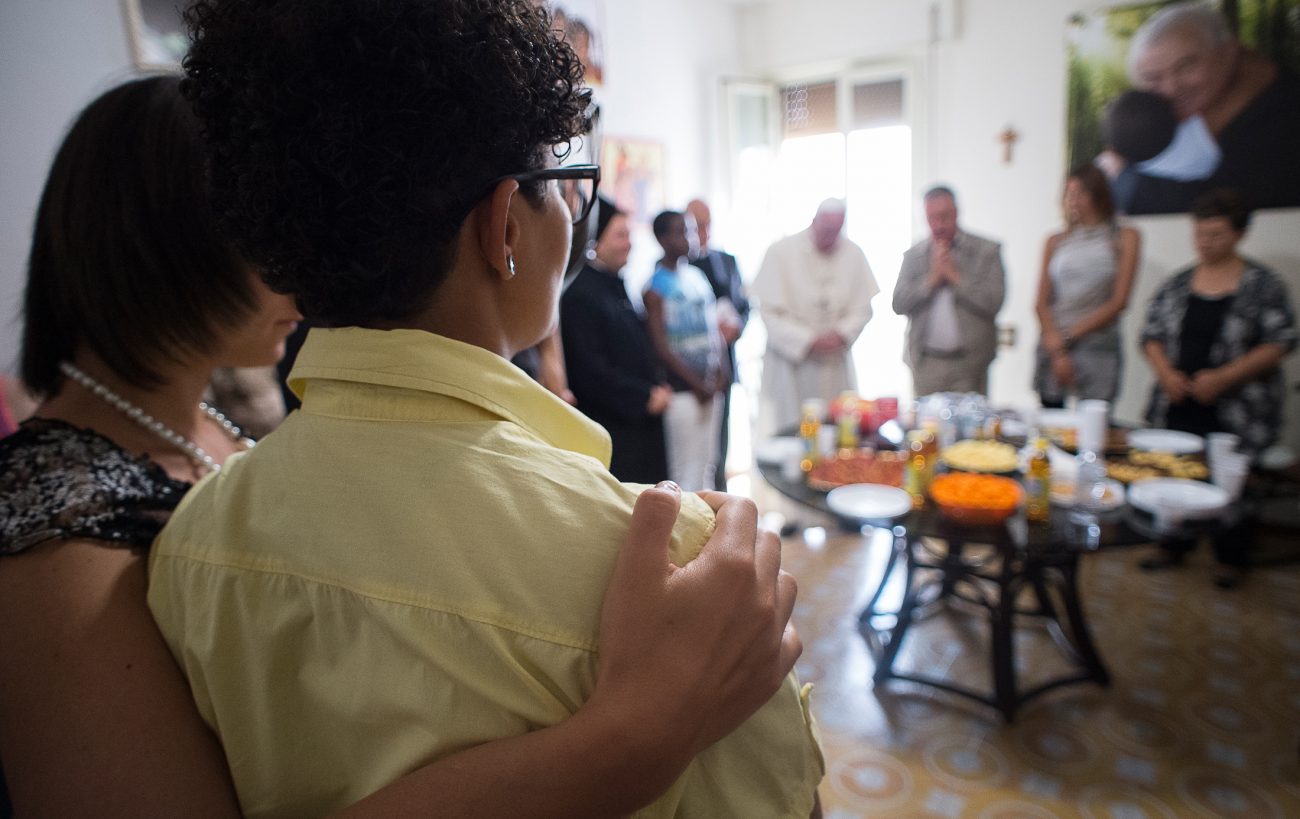 Pope Francis prays with members of the Pope John XXIII Community in Rome in this Aug.12, 2016, file photo. The pontiff paid a surprise visit to the community that helps young women get their lives back together after being rescued from prostitution. A priest who was present during the pope’s visit has written a book as part of an effort to help free women forced into prostitution. (CNS photo/Vatican Media)

VATICAN CITY (CNS) — August is a long-awaited month for countless Romans who escape the sweltering heat and seek some good old-fashioned rest and relaxation at the beach or the mountains.

Since the start of his papacy, though, Pope Francis has made it a point to stay in Rome and take on a reduced schedule rather than leave the confines of Vatican City to the papal residence at Castel Gandolfo like his predecessor.

His reduced schedule, however, does not apply to his Mercy Friday visits, which began during the Jubilee Year in 2016. On Aug. 12 of that year, he visited a house run by the John XXIII Community in northeast Rome that helps young women rebuild their lives after being rescued from prostitution.

While he was moved by the stories of many people he visited throughout the Year of Mercy, this particular visit struck a nerve.

“In that room where I met with young women freed from the forced prostitution trade, I breathed in all the pain, the injustice and the effects of oppression,” the pope wrote in the preface of a new book on the suffering of women forced into prostitution.

The book, titled “Donne Crocifisse” (“Crucified Women”), was released in Italian and written by Father Aldo Buonaiuto, a priest who works for the John XXIII Community, an international association that helps marginalized people. The book’s July 30 release coincided with the World Day Against Trafficking in Persons.

In an email response to Catholic News Service in early August, Father Buonaiuto, who was also present during the pope’s visit in 2016, said Pope Francis was “truly moved and he embraced” the 25 women there who had “suffered every kind of torture and injustice.”

“After listening to the touching stories of these women, the pope felt a strong desire, almost a duty, to ask their forgiveness for the true and proper tortures they had endured because of their clients, many of whom define themselves as Christians,” Father Buonaiuto told CNS. 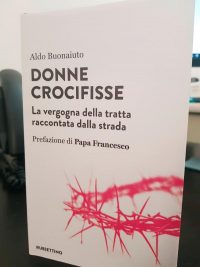 This is the cover of “Donne Crocifisse” (“Crucified Women”) by Father Aldo Buonaiuto, a priest who has worked to rescue women forced into prostitution. The Italian book contains an introduction by Pope Francis and was written as part of an effort to help free such women. (CNS photo/Junno Arocho Esteves)

“Crucified Women,” he said, is part of a larger effort to help free women forced into prostitution and enslaved by human trafficking rackets, which is “a fundamental commitment of the John XXIII Community.”

“This book is intended to be a voice and a further step for the liberation of slaves and to urge governments to commit themselves to take serious action in this regard,” he said. “I have shared my life with these young women for over 20 years and so writing their tragedies and the injustices suffered by those on the streets was important.”

Ordained in 1998, Father Buonaiuto worked helping to rescue women forced into prostitution alongside the late Father Oreste Benzi, founder of the John XXIII Community. Father Benzi died in 2007 and his canonization cause was opened seven years later.

Father Buonaiuto is also an exorcist and consults state police on crimes involving occult sects. While the evil he confronts belong to two different realms — the physical and the spiritual — Father Buonaiuto said both share the same aim: the exploitation of the weakest.

Victims of sects and human trafficking are both used “by their tormenters who subjugate and exploit them for money and power,” he said. In many cases, the Italian priest explained, traffickers use witchcraft and other forms of sorcery to coerce women.

“Women from Nigeria are often subjected to rites of witchcraft. Others are threatened with voodoo rites and all of them experience, albeit in a different way, the darkness that occultism feeds,” he said.

The book makes the case for reversing laws in countries where prostitution is legal. Citing numerous studies, Father Buonaiuto stated that legalized prostitution has only increased the demand by clients, allowing human traffickers to more easily exploit women.

He also includes personal stories of the horrors suffered by women who were bought and sold like merchandise for the sex trade.

Among the harrowing tales Father Buonaiuto recounts in his book is that of Mary, an 18-year-old Nigerian woman whose tragic story began at a young age when she was trained as a child soldier and later sold by a Nigerian mafia.

She was forced to endure sexual violence and several abortions throughout her life. Her tragic story culminated in Rome when she gave birth behind a shrub and after several minutes, her baby stopped crying and died in her arms. To this day, Mary violently reacts to the sounds of babies crying, closing her ears to not relive hearing the final cries of her child.

Mary was among the women Pope Francis met that summer day in August and her story moved the pope, prompting him to apologize for all those men, especially Christians, who abused them, the priest recalled in his book.

“His visit happily shocked these daughters of God who were forgotten by everyone but not by the Holy Father who embraced them and heard them with a tangible humanity,” he wrote.

Father Buonaiuto told CNS that when he asked the pope to write the preface to his book, Pope Francis was “very happy to do so.” He expressed his admiration for the pope who is “one of few world leaders who denounces this social scourge and he does so on every possible occasion.”

He also said he plans to publish the book in other languages, especially in English and Spanish, to honor Pope Francis’ wish that “this book be heard in as many places as possible.”

“The pope speaks of prostitution as a ‘disease’ of humanity and asked for forgiveness,” he said. “His attention to the victims of trafficking provokes debates in the world and I hope that this book too, especially with his preface, will shake the consciences of those who pass off this shame as normal.”

NEXT: African bishop: Church must work to end violence against albinos