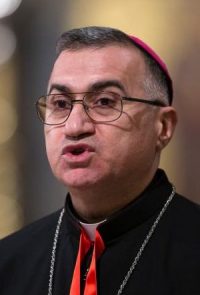 “The truth is that there is a foundational crisis within Islam itself, and if this crisis is not acknowledged, addressed and fixed, then there can be no future for civil society in the Middle East or indeed anywhere Islam brings itself to bear upon a host nation,” Archbishop Warda told Aid to the Church in Need.

The archbishop voiced his concerns in an interview, the transcript of which was released by the organization Aug. 6, the fifth anniversary of the Islamic State group overrunning Christian communities on the Ninevah Plain in northern Iraq.

The Islamic State group’s violence “shocked the conscience of the world” as well as Islamic majority nations, Archbishop Warda said.

“The question now is whether or not Islam will continue on a political trajectory, in which sharia is the basis for civil law and nearly every aspect of life is circumscribed by religion, or whether a more tolerant movement will develop,” he said.

The archbishop also expressed concern that while the Islamic State group has been defeated in Iraq, the “idea of the re-establishment of the Caliphate” has not subsided.

“And with this idea of the caliphate there come all the formal historical structures of intentional inequality and discrimination against non-Muslims,” he added. “We see leaders in other countries in the Middle East who are clearly acting in a way consistent with the re-establishment of the caliphate.”

When Islamic State forces stormed the Ninevah Plain in August 2014 more than 125,000 Christians fled their historic homes of 14 centuries to communities farther south in Iraq. Archbishop Warda said those who left lost their homes, livelihoods, churches and monasteries and, most importantly, their dignity.

Aid to the Church in Need said that about 40,000 Christians have returned to the Ninevah Plain in an attempt to rebuild their lives. The remaining 85,000 either have stayed in Irbil or left Iraq altogether.

Prior to the start of the U.S.-led war in Iraq, the country was home to as many as 1.5 million Christian, according to the archbishop, while today perhaps 250,000 remain.

Archbishop Warda said the declining number of Christians in northern Iraq follows a long trend of people being forced to leave their traditional homelands.

“With each successive cycle the number of Christians drops, till today we are at the point of extinction,” he said. “Argue as you will, but extinction is coming and then what will anyone say? That we were made extinct by natural disaster, or gentle migration? That the ISIS attacks were unexpected, and that we were taken by surprise?

“That is what the media will say. Or will the truth emerge after our disappearance: that we were persistently and steadily eliminated over the course of 1,400 years by a belief system which allowed for recurring cycles of violence against Christians, like the Ottoman genocide of 1916 to 1922,” he said.

Archbishop Warda called on the world to act to end violence and discrimination against innocent Christians and members of other minority religious communities in the war-torn country.

“The entire world faces a moment of truth,” he said. “Will a peaceful and innocent people continue to be persecuted and eliminated because of their faith? For the sake of not wanting to speak the truth to the persecutors, will the world be complicit in our elimination?

“The world should understand that on our path to extinction we will not go quietly any longer,” he continued. “From this point onward, we will speak the truth, and live out the truth, in full embrace of our Christian witness and mission, so that, if someday we are gone, no one will be able to ask: how did this happen?”

NEXT: Church is a mother to all, remains close to those who suffer, pope says