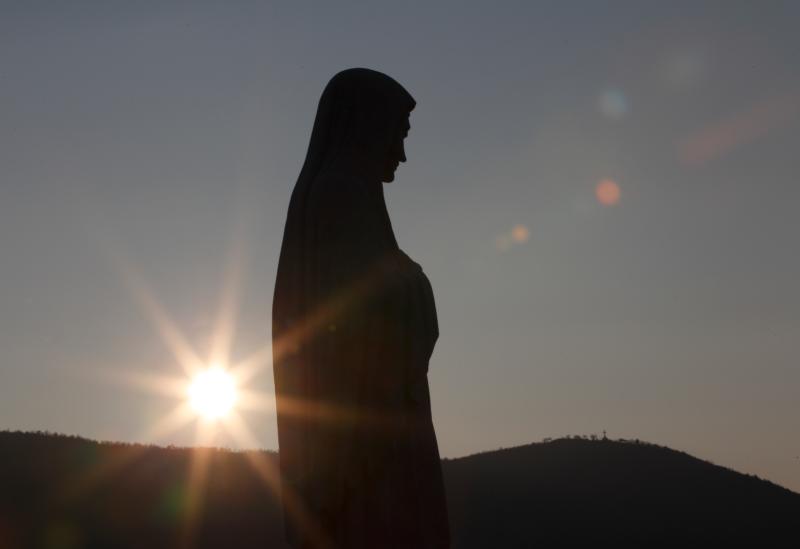 The sun sets behind a statue of Mary on Apparition Hill in Medjugorje, Bosnia-Herzegovina, in this Feb. 26, 2011, file photo. Senior Vatican representatives joined dozens of bishops and hundreds of priests at the first officially approved church youth festival at the site Aug. 2-6, 2019, three months after Catholic pilgrimages were authorized by the pope. (CNS photo/Paul Haring)

WARSAW, Poland (CNS) — Senior Vatican representatives joined the first officially approved church festival at Medjugorje, three months after Catholic pilgrimages to the site in Bosnia-Herzegovina were authorized by the pope.

“We are called to share the difficulties of our contemporaries and we have a responsibility to care for them,” Archbishop Rino Fisichella, president of the Pontifical Council for New Evangelization, told 60,000 young people from 97 countries Aug. 5.

“For something to happen, we have to offer something: our poverty, our misery, our borders, our contradictions. But God will change all that because God works miracles,” he said during the final evening of Mladifest, or Youth Festival.

Meanwhile, the pope’s apostolic visitor to Medjugorje, Archbishop Henryk Hoser, who presided over the festival Aug. 3, said the hilltop shrine had become “a place of meeting and knowing,” adding that “the secret of Medjugorje” was “an invisible reality, but intense and very present.”

More than 40,000 apparitions have been claimed over 38 years at Medjugorje, where six teenagers reported first seeing an apparition of Mary June 24, 1981 while herding sheep.

Some of the visionaries say Mary still appears to them daily with messages at the town, which was largely untouched by the 1992 to 1995 civil war in Bosnia-Herzegovina.

In May 2018, Pope Francis named Archbishop Hoser as apostolic visitor, after a papal commission recommended that Medjugorje, which attracts up to 3 million visitors annually, be designated a pontifical shrine with Vatican oversight.

A ban on pilgrimages organized by Catholic dioceses and parishes was lifted under a papal decree May 12, making possible the five-day festival.

Archbishop Jose Rodriguez Carballo, secretary of the Congregation for Institutions of Consecrated Life, said in an Aug. 2 address that the young pilgrims were “in deep unity” with the pope and grateful to him for “opening up the possibility of coming to pray here.”

Radio Medjugorje reported Aug. 5 that parts of the festival had been watched via the internet by more than 2.8 million people worldwide.

Speaking at an Aug. 2 press conference, Archbishop Hoser said the pope had “opened a great door to enter Medjugorje” with his May decree, adding that he was “personally and intimately convinced” the Marian center offered “a model for new evangelization.”

He said Medjugorje should be seen as “a living, dynamic reality,” with over 700 vocations so far recorded there, adding that the center’s importance was summed up “by the people coming here, praying here, being transformed here and returning to their countries with the Gospel spirit they breathed here.”

“The Holy See’s position has crystallized clearly and has two aspects: the pastoral aspect, which is fully accepted, and the doctrinal aspect, meaning study of the apparitions,” he told KAI, Poland’s Catholic information agency.

“The fact apparitions are still continuing is the main obstacle to a final ruling, since it’s hard to decide on something which hasn’t finished. For now, the question of recognizing the authenticity of the apparitions remains in the hands of the Secretariat of State.”