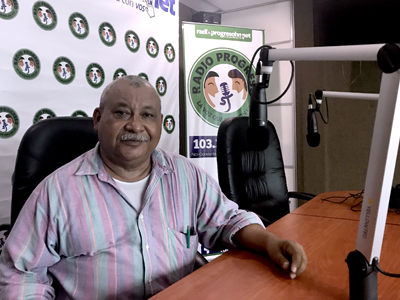 PROGRESO, Honduras (CNS) — Jesuit Father Ismael Moreno has watched migrants leave this crossroads in northern Honduras for decades, starting with his own brother, who left for the United States in 1989. In recent months, he has watched people close to him leave: a colleague at Radio Progreso — a station giving voice to social causes — the daughter of the radio station’s cleaner and his sister’s caretaker.

The departures have come despite rhetoric toward migrants from U.S. President Donald Trump and his administration’s attempts to discourage asylum-seekers and turn the countries to the south of the U.S.-Mexico border into filters for impeding the path of migrants.

“Trump can build all the walls he wants, can put the entire army along the length of the U.S.-Mexico border, can move the border south to Guatemala, can increase the dangers (of migrating), but it’s not going to diminish migration,” the priest said in the offices of Radio Progreso.

“Migration is sustained here by an internal wall of accumulation, exclusion and violence.”

Migration has marked the northern triangle countries of Central America for decades. But the outflow from Guatemala, Honduras and El Salvador has accelerated in recent years, taking the form of caravans at times and causing detentions to soar along the U.S. border.

Father Moreno — better known as Padre Melo in Honduras — has forcefully spoken out in support of migrants, who risk kidnap, robbery and rape along the route north through Mexico.

But as one of Honduras’ better-known social activists, he has long directed his criticism toward the internal issues prompting migrants to flee: inequality, corruption and a lack of opportunities in a country considered among the poorest and most violent in the hemisphere.

Father Moreno also points to political problems, including accusations of graft and embezzlement against senior politicians, for provoking mass outward migration a decade after a coup threw the country into chaos.

Since the 2009 coup, Honduras has “been managed by a political and business mafia … which has turned the state into their business, and elections have become a factor for strengthening their authoritarian project,” he said.

“What the three elections (since the coup) have done is destabilize the country even more and consolidate” power in the current president, Juan Orlando Hernandez, Father Moreno said. “We’ve been advancing toward a fundamentally criminal state.”

Hondurans have protested in the streets over the summer, demanding Hernandez’s ouster following the charges in a U.S. court against his brother, Juan Antonio “Tony” Hernandez, on drugs and weapons charges. U.S. court documents allege drug money funded Juan Orlando Hernandez’s 2013 presidential campaign, according to Reuters. The president denies the charge.

The president already was controversial for having won reelection in a 2017 vote marred by a suspicious vote count — and then cracking down on dissenters.

This year, protesters also have taken issue with proposed privatizations in the health sector. Critics such as Father Moreno say this idea is controversial because past privatizations have put public enterprises in the hands of politically connected people, who raise prices for consumers without improving quality.

While politicians in Honduras pay lip service to migrant issues, Father Moreno says the country’s elites need migrants to make their economic model work. When people leave the country, it reduces social pressure in poor areas — where the government does not invest — and the remittances sent home maintain households and float the economy.

“Remittances give economic stability,” the priest said. “This government and businessmen couldn’t live without remittances.”

The divisions in Honduras have affected the Catholic Church, according to Father Moreno and other Catholics consulted for this story. Hernandez has appeared to find allies in evangelical leaders.

“Enough now,” the Honduran bishops’ conference said in a June statement that criticized the political and business classes. “We worry deeply about the moral decadence our country is falling into. It is never legal to commit evil in order to obtain something.”

Radio Progreso and the Jesuit-run Reflection, Research and Communications Team — both of which he directs — are heavily protected and assigned police protection. He was close with Berta Caceres, an indigenous Lenca activist, who was murdered in 2016 for her work against hydroelectric developments.

Father Moreno said the murder sent a message that no opponent — even those who are beloved by large swaths of the population — was untouchable.

“It’s a bit complicated because what they do is create an environment of stigmatization,” he said. “It’s not that people put a pistol to your head and say, ‘We’re going to kill you.’ But an environment is created in which you appear as an enemy of development, someone promoting public unrest or a promoter of violence.”

He added that members of Honduras’ military intelligence visited him after Caceres’ murder and told him a team there had done an analysis on eliminating him.

“‘Your profile is higher than Berta Caceres had when they killed her,'” he said they told him. “‘So the cost of killing you is more than creating a smear campaign.’ That’s what they’re doing.”

NEXT: New appointment in Syro-Malabar archdiocese rocked by tensions