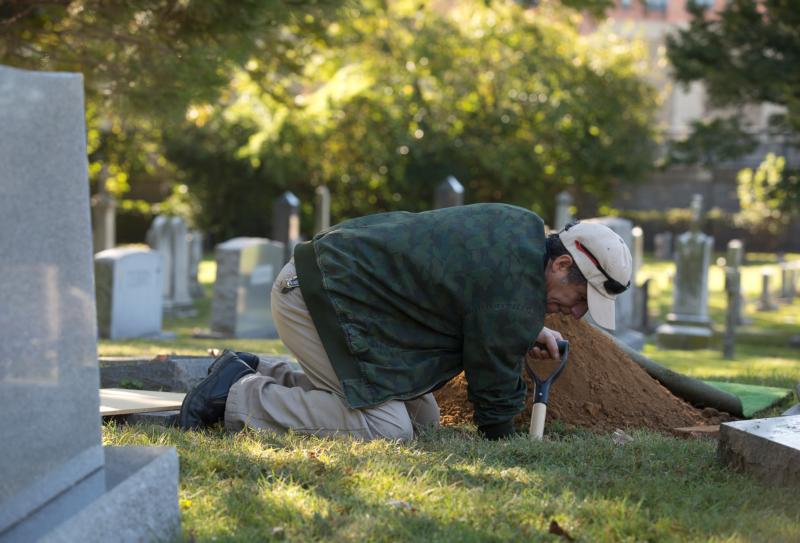 A church employee at St. Mary Catholic Church in Alexandria, Va., prepares an urn burial at the parish’s cemetery in this 2017 file photo. (CNS photo/Tyler Orsburn)

“I thought that would never be approved,” said Nobes.

Then, it was. Washington became the first U.S. state to approve composting human remains May 21. The legislation, which will take effect by 2020, allows the body of a deceased person to be mixed with materials like wood chips and straw in a controlled environment to be composted.

It also now allows alkaline hydrolysis, a process where a body is dissolved with chemicals and which is already legal in 19 other states.

“There are some more environmentally friendly and safe ways of disposing of human remains” besides burial and cremation, Washington state Sen. Jamie Pedersen of Seattle said before the bill became law.

He called recomposition and alkaline hydrolysis “wonderful options” that can show the world “a better way of dealing with this universal human experience” of death.

But Nobes, who runs Gardens of Gethsemani cemetery just north of the border in Surrey, British Columbia, said these alternatives might make a smaller footprint on the environment, but do not offer a body the dignity it deserves.

“We don’t ‘dispose’ of human remains,” he said. “We take care of them in great reverence in anticipation of the resurrection.”

He added while it might sound “romantic” to use the resulting compost to plant a tree in memory of a deceased family member, Catholics should know it does not comply with church teaching.

“This ties in with church teaching not to scatter cremated remains,” he said. “Cremated remains are the body in another form, and we’re called to keep them together and bury them in a place of reverence. We don’t scatter remains or split them among family members.”

In May, Catholic bishops in Washington responded to the new legislation with a statement reminding area Catholics that bodies of deceased loved ones are to be treated with respect.

While the church allows cremation, they wrote, ashes must be treated with the same respect as a body for burial and be kept in a sacred place.

Alkaline hydrolysis and recomposition, they said, need more research and peer-reviewed studies to prove they’re good for the environment and for public health. They expressed concern that alkaline hydrolysis could have a negative impact on municipal water systems because of the chemicals involved, and they criticized the legislation for not including screening to prevent dangerous pathogens from being released into the environment.

“The legislation failed to ensure that the emerging technologies show sufficient respect for the deceased body,” the bishops said.

Nobes agrees with Washington’s bishops, but he has seen a growing interest in eco-friendly burial options on Canada’s West Coast. For example, Royal Oak Burial Park in Victoria offers environmentally friendly burial options, where bodies are wrapped in a shroud made of natural fibers instead of a casket.

“People are conscious of the impact their burial choices have on the environment,” he said.

It will take years to come up with an eco-friendly burial option in British Columbia that follows all local regulations and complies with Catholic teachings about dignified burial — but Nobes said he is working on it.

“We intend to offer green burial options in the future,” he said. “We are researching our options right now.”

Ruck is a staffer at BC Catholic, newspaper of the Archdiocese of Vancouver.