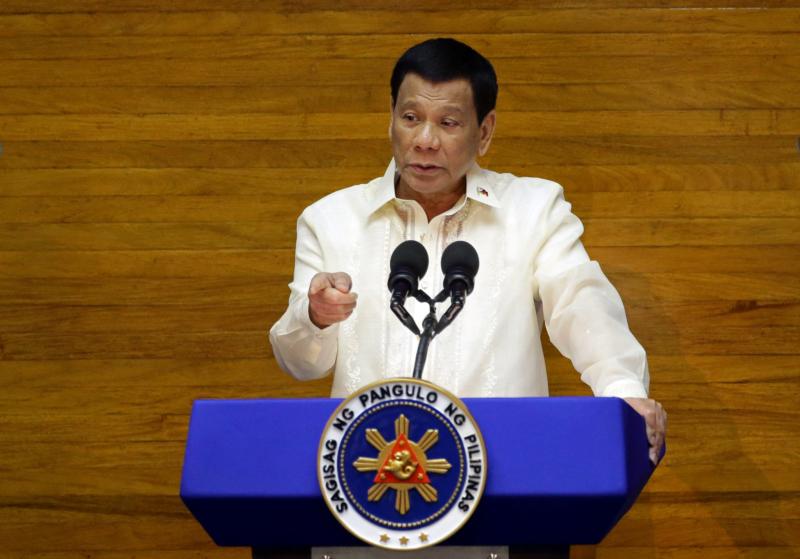 Philippine President Rodrigo Duterte delivers his State of the Nation address July 23 at the House of Representatives in Manila. (CNS photo/Czar Dancel, Reuters)

Philippine President Rodrigo Duterte delivers his State of the Nation address July 23 at the House of Representatives in Manila. (CNS photo/Czar Dancel, Reuters)

Although only retired Bishop Teodoro Bacani of Novaliches was seen filing an affidavit Aug. 8, the Justice Department confirmed the other prelates had already submitted their replies to the allegations.

All filed their “counter-affidavits” a day before the start of preliminary investigations into a complaint filed by the Philippine National Police last month.

Philippine authorities have filed sedition, cyber libel, libel, and obstruction of justice charges against 36 people including the country’s vice president and members of the opposition.

The charges stem from the release of a video that went viral on several social media platforms early in 2019 that showed a hooded man claiming that Duterte and his family were involved in the illegal drug trade.

Peter Joemel Advincula, the man claiming to be the hooded figure and known as “Bikoy,” during a media briefing early this year accused Duterte’s son, Paolo Duterte, and presidential aide Bong Go were involved in drug syndicates.

Weeks later, however, Advincula was presented by the police to the media where he claimed the opposition to Duterte and several church people were behind an alleged plot to oust the president.

In a statement submitted to the court, Advincula named the prelates as part of a “shadow group” that allegedly handles the financial, logistical, security and accommodation support for a plot against the president.

While confirming all the accused bishops had filed their replies to the allegations, he said they will not join the preliminary investigation at the Department of Justice.

Bishop David earlier denounced the filing of what he described were “unjust” and “atrocious” charges.

“What motivates the supposed witness to give false testimony is what in fact they should be investigating,” he said in a statement.

“The intention is obvious: pure harassment and an effort on the part of the (police) to do not their sworn duty but what they think will be pleasing to the higher authorities,” he added.

Aid to the Church in Need, the Catholic Church’s international charity that supports pastoral aid projects for poor and persecuted people, issued a statement Aug. 9 calling on Catholics to pray for the safety of the bishops.

Jonathan Luciano, Aid to the Church in Need director in the Philippines, said the organization was “saddened by the baseless accusations” against the bishops. “Such charges against them constitute persecution of the church,” he said.

“The bishops unjustly accused of sedition are exemplars of dedicated humble service to the wellbeing of Filipinos as well as to many humanitarian causes … proof of their undeniable love for the country,” he added.

NEXT: In interview, pope outlines Amazon synod, warns against nationalism