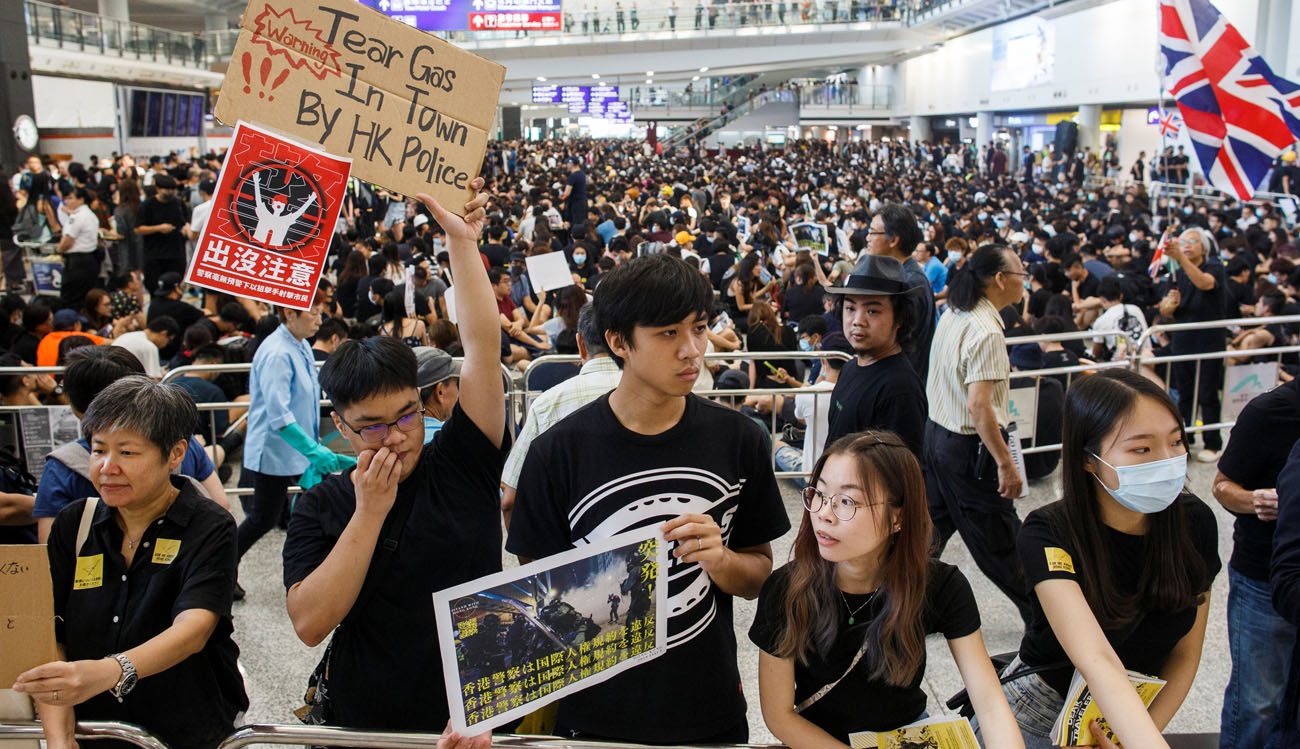 Anti-extradition bill protesters hold placards for arriving travelers during a protest at Hong Kong International Airport Aug. 9, 2019. More than 1,000 Catholics prayed during a candlelight vigil outside the Cathedral of the Immaculate Conception Aug. 8 for Hong Kong to solve its political crisis in a nonviolent manner. (CNS photo/Thomas Peter, Reuters)

HONG KONG (CNS) — More than 1,000 Catholics prayed during a candlelight vigil for Hong Kong to solve its political crisis in a peaceful, nonviolent manner.

Organizers of the Aug. 8 vigil said they hoped the faithful can remain solely a prayer movement so that tensions ease in the weekslong series of mass demonstrations by Hong Kong citizens opposing a controversial extradition law.

A crowd estimated at 1,200 demanded a full withdrawal of the extradition amendment proposed by chief executive Carrie Lam; the establishment of an independent committee to investigate the conflict between protesters and police; and accountability by the Hong Kong Legislative Council and chief executive.

They gathered in front of the Cathedral of the Immaculate Conception and marched through the central business district to the Court of Final Appeal of the Hong Kong, singing hymns and holding electronic candles.

Hong Kong Auxiliary Bishop Joseph Ha Chi-shing addressed the gathering, saying the situation called for the Catholic Church to speak with peace and reason. “In the past two months, we have really experienced the limit of humanity and we should pray,” he said.

“Violence will only create more violence. Hatred will only produce more hatred. Injustice will never achieve justice. History will prove that only peace and reason can establish a long-term peace,” he said.

The bishop pointed out that the root cause of the demonstrations lay with the Hong Kong government, which, he said, had no excuse for its actions.

Meanwhile, keeping the peace was something of a “mission impossible” for police, he said, because the current problems were rooted in politics, not security.

Bishop Ha also admitted that the city was full of emotion and people are unsure of what to do in response to the Hong Kong government’s actions. “But at least we can stop for a while and give each other a cooldown period to think about what to do next,” he suggested.

Lina Chan, executive secretary of the diocesan peace commission, noted that the levels of violence by police and resistance by the protesters were increasing, leading the church to stress that protesters utilize nonviolent principles in their demonstrations.

“When we are reaffirming the importance of peace, we should base that on justice,” Chan told ucanews.com. “We need to bring the truth into the light; this is what can lead us to a true reconciliation.”

“It is not only the processionals and trade unions who request it but also the public,” she added. “To have such a committee can help avoid similar things happening again.”

Frances Yu, a member of St. John the Baptist Parish, agreed with the idea of establishing such a committee, thinking it could restrain emotions. “The violence today is not we want to see. That’s why I pray and hope the issue can be solved soon,” she said.

Although the amendment has been suspended, Yu wants the government to formally withdraw it, something which Lam has refused to do. She also called for an investigation into allegations of abuse of power by the police.

South Korean priest Father Luke Park, who also joined in the march, said that some people, both in positions of authority and residents in general, hoped for a speedy resolution to the crisis.

“But it is tempting to use violence,” Father Park said. “Using force is quick to do but finding a peaceful way takes time. That’s why, as Christians, we have to stick to our position.”