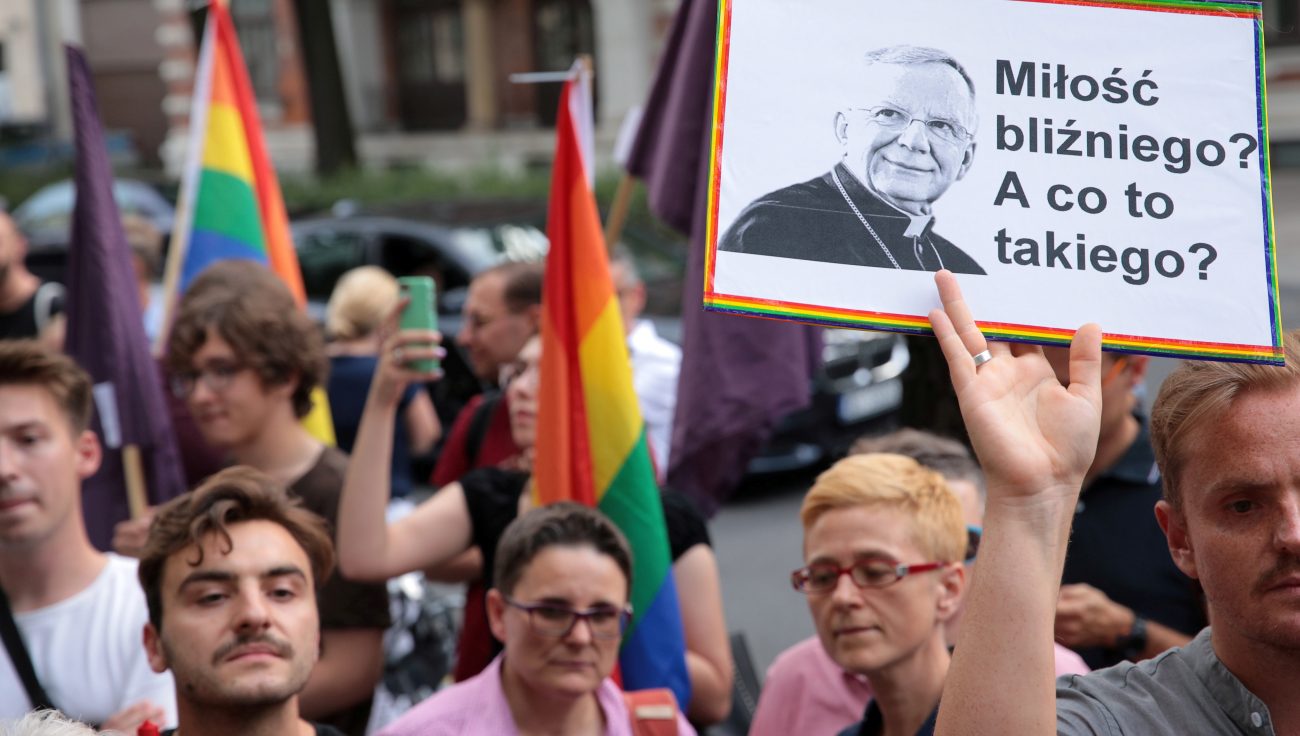 People in Warsaw, Poland, gather outside the apostolic nunciature Aug. 7, 2019, to demand the resignation of Archbishop Marek Jedraszewski of Krakow. The protesters were upset that the archbishop had likened the LGBTQ community and the rainbow flag to a "communist plague." The placard reads "Love of a neighbor? What's this?" (CNS photo/Dawid Zuchowicz, Agencja Gazeta via Reuters)

WARSAW, Poland (CNS) — The president of the Polish bishops’ conference confirmed the country’s Catholic Church will resist “LGBT ideology” as equality campaigners demanded the dismissal of an archbishop who branded gays and lesbians a “rainbow pestilence.”

“People belonging to so-called sexual minority circles are our brothers and sisters for whom Christ gave his life,” Archbishop Stanislaw Gadecki of Poznan said in a statement Aug. 8.

“But respect for specific people cannot lead to accepting an ideology which aims at a revolution in social norms and interpersonal relations. This revolution in custom and morals, as Pope Francis stresses, often brandishes a flag of freedom, while in reality inflicting spiritual and material devastation,” he said in response to ongoing disputes between church leaders and LGBTQ groups.

Supporters of LGBTQ rights are planning a series of “equality parades” across the country in upcoming weeks.

Archbishop Gadecki said the “worsening polemic” was linked to the “offensive by LGBT-plus circles,” as well as to related plans by some local authorities to introduce “a new approach to sex education” beginning in September.

LGBTQ groups frequently have complained of discrimination in Poland, where the predominant Catholic Church has vigorously rejected same-sex marriage and backed the exclusion of LGBTQ staffers from Catholic schools.

In July, gay rights campaigners accused Archbishop Tadeusz Wojda of Bialystok of inciting violence against an LGBTQ march in the eastern city during which police used stun grenades and pepper spray to hold back aggressive counter-protesters.

Meanwhile, in an Aug. 1 homily, Archbishop Marek Jedraszewski of Krakow told Catholics that those demanding tolerance had in reality supported “violence, humiliation and sneering against the most sacred symbols.” He said the “red pestilence” of communism had been replaced by “a rainbow one,” which also sought “to conquer spirits, hearts and minds.”

Poland’s Catholic Radio Maryja said Aug. 6 it had been ordered by Google to remove Archbishop Jedraszewski’s homily from its YouTube channel on grounds it “promoted hatred.”

A day later, about 200 protesters, including LGBTQ Catholics, demanded the dismissal of Archbishop Jedraszewski and other church leaders during a demonstration outside the Vatican’s Warsaw nunciature.

In his statement, Archbishop Gadecki said he was appealing to local officials not take decisions “concealing an ideology which denies natural sexual differences,” and to parliamentarians not to support LGBTQ efforts to push through laws allowing “homosexual marriages” and child adoption.

He added that criticism of Archbishop Jedraszewski and the hostile reaction of some employers to staffers voicing disapproval of “LGBT+ ideology” indicated the spread of a “totalitarianism of outlook,” which sought to “banish people thinking differently from the sphere of freedom.”

“I appeal to all people of goodwill to defend the principle of non-discrimination not just for supporters of this ideology, but also to allow equal rights to its opponents,” he said.