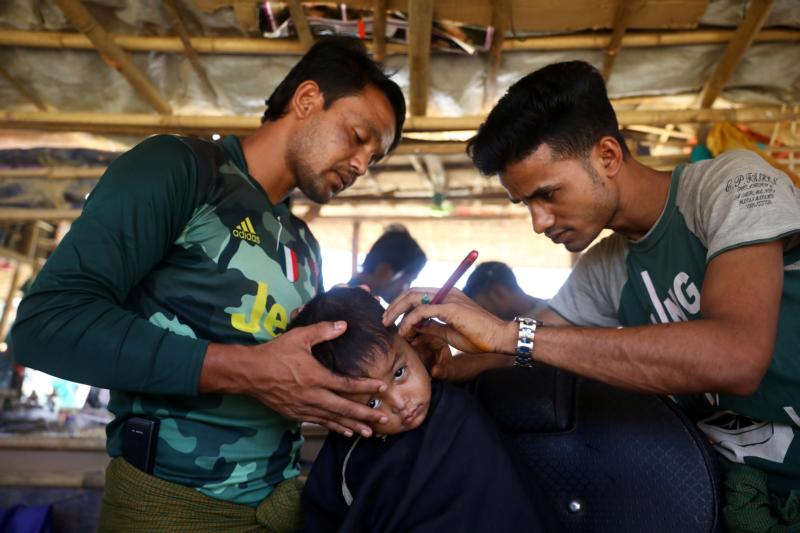 A Rohingya refugee boy has his hair cut at a refugee camp in Cox’s Bazar, Bangladesh, April 9, 2019. The second attempt in nine months to repatriate hundreds of Rohingya Muslims from camps in Bangladesh failed after the refugees refused to return “unconditionally” to Myanmar. (CNS photo/Mohammad Ponir Hossain, Reuters)

DHAKA, Bangladesh (CNS) — A second attempt to repatriate hundreds of Rohingya Muslims from camps in Bangladesh failed after the refugees refused to return “unconditionally” to Myanmar.

The refugees were chosen from a list of containing 22,000 Rohingya in Bangladesh that was handed to a Myanmar delegation in July.

This time, ucanews.com reported, the situation was calmer in the camps but yielded the same result.

The attempt came only days before the Aug. 25 second anniversary of the military crackdown in Myanmar’s Rakhine state, which forced more than 742,000 Rohingya Muslims to flee to Bangladesh.

Mohammad Abul Kalam, commissioner of the Bangladesh’s Relief and Repatriation Commission, told journalists at a refugee camp in Teknaf that the repatriation plan was postponed because of the “unwillingness” of refugees.

“We kept five buses and three trucks ready from the morning to take the refugees to repatriation points, but none turned up. During interviews with 295 listed Rohingya families, none agreed to return to Myanmar until their demands were met,” Kalam said.

The demands included a guarantee of citizenship in Myanmar, freedom of movement, repatriation to their home, the return of and reparations for their properties, and international-level security, he said.

However, interviews with other Rohingya families will determine whether they are willing to return unconditionally, he added.

Officials from Myanmar and Chinese embassies as well as the United Nations refugee agency also attended the press briefing.

As the Aug. 22 date for repatriation approached, officials from the commission and refugee agency conducted a series of interviews with Rohingya families to seek their opinion about returning to Myanmar.

Muhammad Kamal, 35, a father of three living in Kutupalong camp in Cox’s Bazar, is one of those listed for return.

“Why should we go back to Myanmar without an assurance of citizenship and security? Myanmar (military) will kill us. We are happy in Bangladesh where there is no fear of death at least,” Kamal told ucanews.com.

“First ensure that our rights will be protected, justice delivered and that repatriation will be to our home not to camps, and we will go back immediately,” he added.

The failure to repatriate the Rohingya is not “a failure” but “a lesson” to be learned, said Holy Cross Father Liton Gomes, secretary of the Bangladesh Catholic bishops’ Justice and Peace Commission.

“The Rohingya crisis is a complex issue, so a repatriation plan can be sustainable if we can ensure that we are addressing root causes of the Rohingya’s plight — their unmet basic rights. Logically, there is no guarantee of a peaceful and dignified life in Myanmar without fulfilling their demands,” Father Gomes told ucanews.com.

“The international community needs to continue pressure, so Rohingya rights are recognized and their repatriation becomes worthwhile,” he said.

The Rohingya have lived in Myanmar’s Rakhine state for generations, but many Buddhists consider them “recent illegal immigrants” from Bangladesh.

In various phases since the 1970s, Rohingya have trickled into Bangladesh to escape persecution by successive military governments and elements from Rakhine Buddhist communities.

The 2016 and 2017 military atrocities in response to Rohingya militant attacks on security forces triggered a mass exodus. The U.N. has described the military action against the Rohingya as “ethnic cleansing.”

Bangladesh, Myanmar and the UNHCR signed a repatriation deal in early 2018, but through Aug. 23 not a single person had been repatriated.