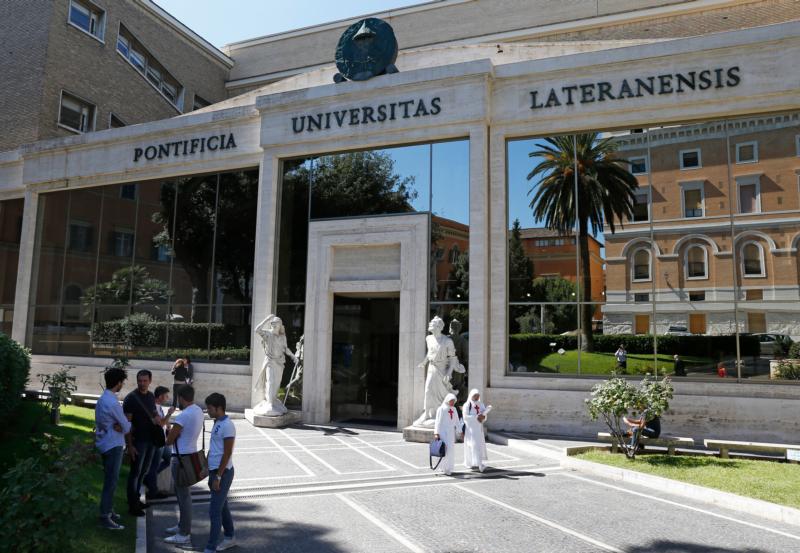 The Pontifical Lateran University, which houses the Pontifical John Paul II Theological Institute for Marriage and Family Sciences, is pictured in Rome in this Sept. 20, 2013, file photo. Recent changes at the institute have been criticized by some students. (CNS photo/Paul Haring)

VATICAN CITY (CNS) — A normally quiet month was surprisingly struck by a brief, but intense summer squall at the end of July.

Questions and controversy, accusations and explanations blew through Rome and across the webiverse concerning big changes underway at the Pontifical John Paul II Theological Institute for Marriage and Family Sciences.

The past week saw so many points/counterpoints ping-ponging back and forth that many are still left wondering what is going on at the famed institute devoted to the study of church teaching on marriage and the family.

The institute’s new statutes, structures and related norms, three years in the making, went into effect after they were approved by the Congregation for Catholic Education this summer.

The institute published the new charter and bylaws online in mid-July and sent letters to faculty it wished to hire or rehire given it was literally re-founded — starting anew, which would include new procedures for hiring staff.

While practically every previously employed faculty member was asked to return, Msgr. Livio Melina, a former president of the institute, and Father Jose Noriega were not asked back.

The loss of two well-known professors, as well as “fears” and uncertainties about the new curriculum prompted two students to write a letter, dated July 24, to Msgr. Pierangelo Sequeri, institute president, and Archbishop Vincenzo Paglia, chancellor.

They expressed their dismay over the sudden and unexpected way students were notified about the “crucial changes that affect us directly as students” and worry those changes resulted in a “loss of the formational approach” and identity of the specialized institute, which were the main reasons “most students and their superiors chose this Institute for their education.”

The grievances also made it to the press, leading the institute to send a written communique July 29, seeking to respond to the letter’s concerns as well as reprimand and correct unfounded “rumors and comments” in circulation.

Believing no “satisfactory and clear answer” to the letter had been given, a specially dedicated website went live July 30 with a link allowing anyone to enter a name to the letter. As of Aug. 5, more than 1,000 names had been added — 192 of them saying they were current students, 396 said they were former students with others signing on “in support.”

The match was lit and from there, numerous articles and commentaries roiled forth — a frothy mix of understandable confusion and worry to conspiracy theories about a rebellion against St. John Paul’s legacy and the end of authentic church teaching.

Traditionally “official” church outlets sprinkled a little water on the fires: The Vatican newspaper, L’Osservatore Romano, ran an article explaining why this ecclesial academy needed to better understand what families were struggling with as well as church teachings; and Vatican News interviewed Msgr. Sequeri, who reiterated the institute’s fidelity to John Paul’s vision, and made an appeal for communion to prevail over distrust and “personal interests.”

But the internet offers many platforms for ominous disagreement, including by a key stakeholder, the institute’s current vice-president, Father Jose Granados, a member of the Disciples of the Hearts of Jesus and Mary, the same religious order Father Noriega heads as superior general. Father Granados said he agreed with Pope Francis’ aim of renewal, but feared the institute’s identity was “seriously threatened.”

And if pictures speak louder than words, a photo of Msgr. Melina sitting next to retired Pope Benedict XVI was published online Aug. 5 with a caption saying the meeting happened Aug. 1.

From this tangle, two dominant narratives emerge: one tells a dark foreshadowing of an important center of learning that will be unable to stay true to the faith and its mission if its curriculum is revamped or staff changed.

The other story suggests the conflagration was caused by an awkward, circuitous effort to resolve a difficult situation, something Father Granados speculated in his July 31 interview.

“Were there doctrinal problems in the teaching of these teachers?” he asked rhetorically. Their students and their writings would say there weren’t, he said, underlining that these two teachers were only explaining how to understand Pope Francis’ teachings “in continuity with the previous popes.”

“And in any case, if one thought, in spite of everything, that there were doctrinal problems in their teachings, why are they not judged and given the possibility of defending themselves?” asked Father Granados.

He noted that, when seen in this light, the dismissals look like an “arbitrary exercise of power” that threaten “the academic freedom” of all teachers, but specifically those who don’t follow the “theological lines that university authorities dislike.”

Avvenire, the national Italian Catholic newspaper, owned in part by the Italian Bishops’ Conference, first suggested these internal tensions were an important piece of the puzzle.

The author, Luciano Moia, recalled in an article published July 30 how some people at the institute had criticized the work of the two synods on the family and the post-synodal document, “Amoris laeititia.”

Without naming specific faculty, he said the attacks were especially unpleasant because they were coming from “the heart of an institute that should have represented in the field of high-level, specialized formation one of the drivers of renewal, not the organizer of an insurgent faction.”

Msgr. Melina fired back with a letter to Avvenire, which it published in full Aug. 2, criticizing Moia for implying he and Father Noriega were guilty of disloyal “attacks” against the pope.

In fact, such an insinuation seriously harmed their dignity and good name, and made them victims of calumny, he wrote.

“Defamation is not only a grave sin, which Pope Francis has many times lashed out against, but it is also a criminal offense,” the monsignor said.

While both critics and defenders of the institute are quick to hint of serious theological and academic issues at the heart of this imbroglio, it wouldn’t be the first time an organization eliminated a position or used a legal loophole as a way to politely let someone go, especially in Italy where saving face reigns supreme.

So what will the new Pontifical John Paul II Theological Institute really be? It is too soon to tell, but much should be revealed in the fall, when faculty hires, courses and curricula are complete.

For now, the takeaway may be this: At a time when people so keenly desire truth and greater transparency, this messy mid-summer storm has shown just how far off that horizon still may be.

PREVIOUS: Trinidadians step up to aid Venezuelan migrants when government steps back