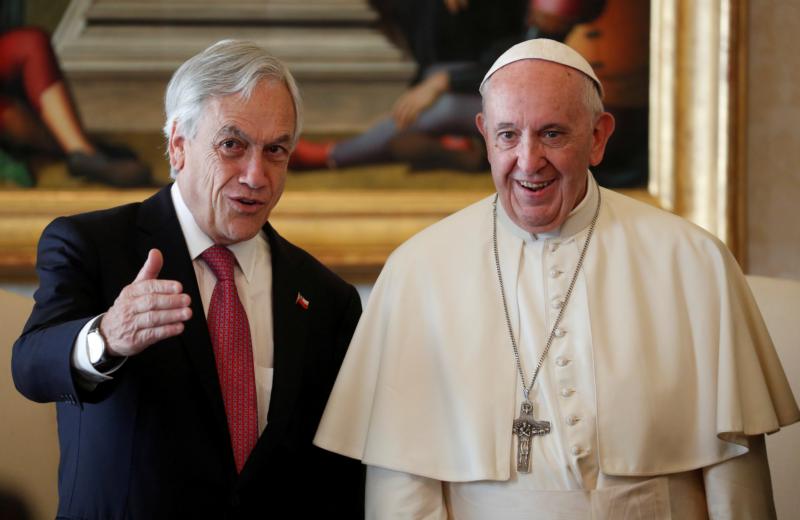 Pope Francis greets President Sebastian Pinera of Chile during a private audience at the Vatican Oct. 13, 2018. The apostolic nunciature in Chile announced that the Vatican has opened an investigation into allegations of sexual abuse against retired Archbishop Bernardino Pinera Carvallo of La Serena, who is the president’s uncle. (CNS photo/Alessandro Bianchi, poo via Reuters)

VATICAN CITY (CNS) — The apostolic nunciature in Chile announced that the Vatican has opened an investigation into allegations of sexual abuse against retired Archbishop Bernardino Pinera Carvallo of La Serena, who is the uncle of Chilean President Sebastian Pinera.

In a statement released Aug. 20, the nunciature said the preliminary investigation will determine the credibility of an accusation of abuse allegedly committed “more than 50 years ago” by Archbishop Pinera who, at 103, is the oldest living bishop in the world.

“We are in contact with the person who filed the complaint, and, at the same time, we are acting in accordance with the principle of the presumption of innocence,” the nunciature said.

Shortly after the investigation was announced, Archbishop Pinera, who served as president of the Chilean bishops’ conference from 1983 to 1988, released a statement saying he was “unaware of the accusation” made against him and that he would cooperate with the Vatican investigation.

“I testify that in my long priestly life, which began in 1945, I have always had impeccable conduct,” the archbishop said.

News of the investigation garnered widespread attention in Chile due to the archbishop’s familial ties with the current head of state.

After learning of the accusation, the Chilean president told local media that he respected the investigation’s search for the truth and that “this case is no exception.”

However, Pinera said he found it difficult to believe the allegations made against his uncle.

“Having known Bernardino Pinera for almost 70 years as his nephew, I find (the allegations) hard to believe because I know his conduct, his behavior throughout a lifetime, and it is difficult for me to believe an accusation that was made more than 50 years after the alleged events occurred,” the president said.

NEXT: Matters of life and death: Pope to bring his message to southern Africa