Matters of life and death: Pope to bring his message to southern Africa 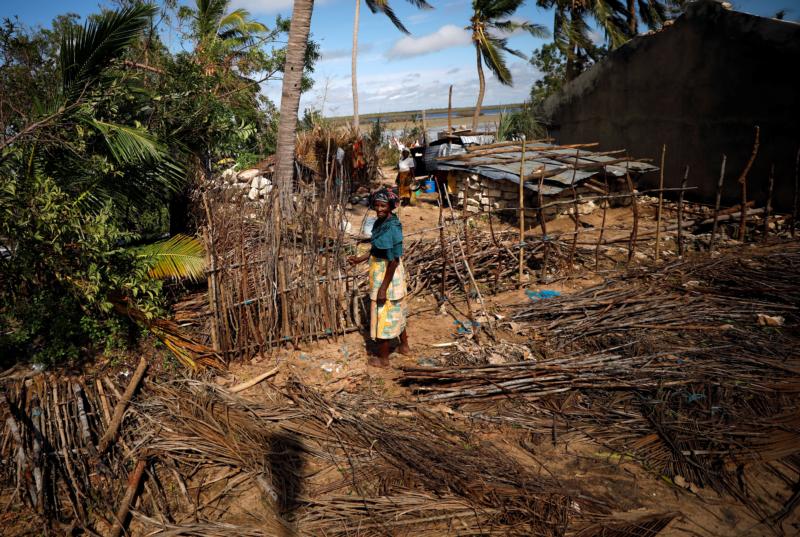 A woman in Ibo, Mozambique, stands outside a house damaged by Cyclone Kenneth May 1, 2019. Pope Francis will visit Mozambique on the first leg of a three-nation trip Sept. 4-10 that includes Madagascar and Mauritius. (CNS photo/Mike Hutchings, Reuters)

VATICAN CITY (CNS) — Rejecting violence, promoting interreligious harmony, caring for the environment and stamping out government corruption are expected to be high on the agenda Sept. 4-10 when Pope Francis visits Mozambique, Madagascar and Mauritius.

“The pope’s very presence will be his principle message to the people of Mozambique,” said Father Giorgio Ferretti, an Italian missionary and pastor of the cathedral in Maputo, Mozambique. “Just the fact of him walking these streets, meeting the people, speaking to them will be a great message of peace.”

After 15 years of civil war in Mozambique, a peace agreement was signed in 1992, concluding a two-year mediation process facilitated by the Rome-based Community of Sant’Egidio, the Catholic archbishop of Beira and representatives of the Italian government.

The country has been at peace for 27 years, “but there still hasn’t been a real de-militarization of some parts of what had been the armed opposition, so we must still pray and work for peace in this country,” Father Ferretti said. “Then, in the north of the country, in the province of Cabo Delgado — where there are Americans, Italians and others involved in the extraction of gas — there has been disorder; it still is not clear at all whether we are dealing with Islamic fundamentalists, but there has been violence.”

When the incidents began in October 2017, many were quick to suspect Islamic fundamentalists; however, others believe the violence is more closely linked to the foreign expansion of the natural gas industry in a region where most people are very poor.

St. John Paul II’s visit to Mozambique in 1988 “laid the foundations for a commitment to peace,” Father Ferretti said. “Now, the visit of Pope Francis can be like a final seal on that process for an effective and definitive peace in the country. This is the great hope of the church and the people for the visit of the pope.”

Leah Marie Lucas is director of Caritas Pemba, the capital of Cabo Delgado province, where in addition to the insecurity mentioned by Father Ferretti, people are struggling to recover from the devastation caused by Cyclone Kenneth in April.

Pope Francis will not be visiting the areas devastated by Cyclone Idai in March or Cyclone Kenneth a few weeks later, but he is likely to remember the hundreds of Mozambicans who died in the violent storms and the thousands left homeless.

In Cabo Delgado, some people already were displaced by the violence when the cyclone wiped out more homes, Lucas said. “Even if they remain close to their home village, they are not able to farm, and this year will experience serious food security challenges.”

More frequent and more violent super storms like Idai and Kenneth are headline-making signs of the devastating impact climate change already is having on the countries of southern Africa and the Indian Ocean, including Mozambique, Madagascar and Mauritius.

Franciscan Father Jean-Charles Rakotondranaivo, “custos” or superior of Franciscans in Madagascar and Mauritius, said people in the two nations “are already experiencing the effects of climate change,” much of it caused by the people themselves.

Particularly in Madagascar, “we are experiencing rapid and growing deforestation,” he said. “In 50 years, we have lost three-quarters of our forest” to meet the demand for fuel wood and charcoal and to clear areas for farming.

Catholic Relief Services, the U.S. Catholic overseas aid and development agency, has been working in Madagascar for more than 50 years; meeting the challenges of climate change while helping poor farmers is a key part of its work there.

Partnering with other development agencies, for example, CRS is helping farmers sow plants that can stabilize sand dunes along the southern coast and prevent them from encroaching on farm plots. Another project helps subsistence farmers create cooperatives and generate income by growing spices since the island is the world’s largest producer and exporter of vanilla and also produces black pepper, cloves, turmeric and cinnamon.

Shaun Ferris, CRS director of agriculture and livelihoods, said soil and water management is a key focus of the agency’s programs in Madagascar “where more than 50% of all households can be classified as food insecure, and 90% of the country’s population lives on less than $2 a day.”

Pope Francis’ social-environmental encyclical, “Laudato Si’,” was “a brilliant document,” Ferris said, and its message “is the message of the decade” because climate change and ecological degradation are real and strongly contribute to poverty, hunger, conflict and migration.

Father Rakotondranaivo sees the pope’s repeated condemnations of corruption and his teaching on politics as service as another essential message for the region, particularly for Madagascar.

Unfortunately, he said, having political and civil responsibility too often is seen “not as a service but as a great privilege, a way to enrich oneself. Generally, politicians get rich very quickly. Madagascar is a country rich in natural resources, but the population is very poor. The inequality between a handful of rich and the poor majority is blatant. It is time to wake politicians up to focus more on the common good.”