Defending Amazon against loggers, ranchers, agribusiness can be dangerous 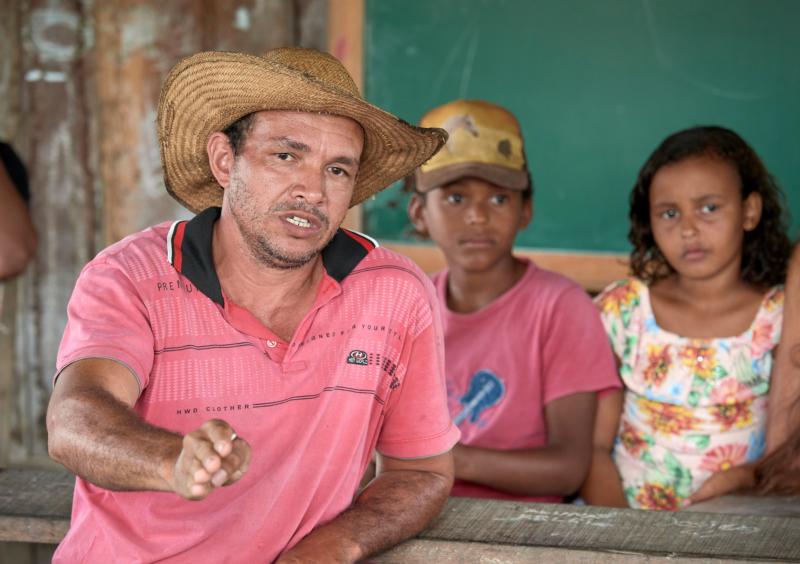 Edimilson Ferreira Nascimento, 37, leader of the God and Life Association, an organization of small farmers, speaks to a gathering near Anapu, in Brazil’s northern Para state. The area has seen violent conflict between small-scale farmers, who are backed by local church activists, and ranchers and loggers. (CNS Photo/Paul Jeffrey)

ANAPU, Brazil (CNS) — Across a stream and down a dirt road at the edge of this Amazonian town, a carefully tended crypt marks the burial place of Notre Dame de Namur Sister Dorothy Stang.

The missionary from Dayton, Ohio, was shot to death in 2005 in retaliation for her defense of small-scale farmers who resisted land-grabbing by rich loggers and ranchers.

Beside her grave stands an even grimmer memorial: a simple wooden cross, the color of blood, with neat white letters listing the names of 16 local people murdered for the same cause.

One more person has been killed since the cross was painted, and seven other local community leaders are in hiding because of threats.

Antonia Silva Lima, 63, rested her hand on the cross and bowed her head.

Lima lives in a place called Good Hope — Boa Esperanca, in Portuguese — that was created as part of an agrarian reform program. The idea was that the families who settled there would farm no more than one-fifth of their land and keep the rest in the forest.

The project angered local loggers, who wanted to take timber from the forest. The parish team, including Sister Stang, helped the farmers organize and learn about their rights.

Rural farmers in this part of the Brazilian Amazon mainly grow food crops, such as corn, beans and fruit, for their families. Whatever surplus they produce, they sell in local markets.

“Nobody who has land is hungry,” said Notre Dame de Namur Sister Jane Dwyer, who has worked in Brazil since 1972. “But they don’t get rich.”

In various parts of the Amazon, parish teams and the Brazilian bishops’ Pastoral Land Commission help communities defend their land against loggers, ranchers and industrial-scale farms. The work can be dangerous, because land conflicts are often violent, especially in the state of Para, where the Notre Dame de Namur Sisters work.

On a rainy morning in April, a small group of community leaders from around Anapu gathered in an open-sided building within sight of Sister Stang’s grave. Roads made impassable by the weather had kept some people away. Another group had stayed home to head off logging trucks that were trying to pass through their community.

Those who attended discussed common threats and made plans for an annual awareness-raising pilgrimage for the forest.

The grassroots organizing that the parish staff has done over the years has borne fruit, Sister Dwyer told Catholic News Service. 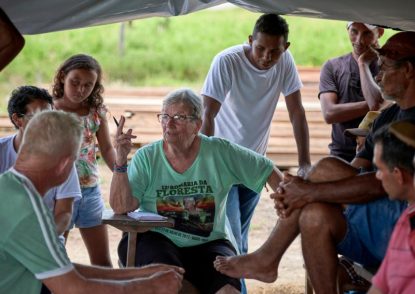 U.S. Sister Jane Dwyer, a member of the Sisters of Notre Dame de Namur, talks with farmers in the countryside near Anapu, in Brazil’s northern Para state. Church activists have been at the forefront of defending the Amazon and its people, but they’ve paid a heavy price. (CNS photo/Paul Jeffrey)

“The people don’t need us” to organize them, she said. “They know what to do. But we stay, because if we leave, they’ll be assassinated.”

Sister Stang’s story has taken on mythic proportions among small-scale farmers around Anapu. Some say it gives them strength to stand up for their rights.

Community leaders live with constant threats and harassment. And the Brazilian priest who worked with Sister Stang for years became a target after her death.

Father Jose Amaro Lopes de Souza, a representative of the Catholic Church’s Pastoral Land Commission, was charged last year with conspiracy, extortion, threats, trespassing and money laundering and spent three months in prison. His accuser is a logger and politician.

Father Amaro, as he is known, said his only crime is helping poor people stay on their land. Since leaving prison, he has spent nearly a year under virtual house arrest in the bishop’s residence in Altamira.

Prohibited from participating in gatherings of more than five people, he cannot celebrate Mass in a parish, so he celebrates at home, with some sisters.

“My room is my prison,” he said, looking around at the sparsely furnished space, its walls adorned with posters of Che Guevara and the movie, “The Motorcycle Diaries,” as well as Father Josimo Morais Tavares, a priest whose assassination in 1986 for his defense of the rural poor inspired Father Amaro to become a priest.

A glass jar on one shelf holds a precious relic: soil stained with the blood of Sister Stang, scooped up from the place where she fell.

Father Amaro was targeted because he “was the symbol of the defense of the small farmers,” said retired Bishop Erwin Krautler, who headed the Territorial Prelature of Xingu, which includes Anapu, from 1981 to 2015. “All he did was defend them.”

In the home he shares with Bishop Krautler and the current prelate of Xingu, Bishop Joao Muniz Alves, Father Amaro also follows the news, which he fears bodes ill for rural small-scale farmers like those among whom he has ministered for most of his life.

President Jair Bolsonaro, who took office in January, threatens to roll back gains made by small-scale farmers in the past decade. The president is supported by a congressional bloc known as the “ruralistas,” who promote the interests of large landholders.

Land disputes affected nearly 1 million people in Brazil in 2018, according to the Pastoral Land Commission. That was an increase of about 35 percent over 2017. Murders in rural areas dropped to 28 in 2018 from 71 in 2017. But the commission recorded 10 in just the first four months of 2019, signaling what could be a deadlier year.

Once the Trans-Amazonian Highway was built, cutting a route into Brazil’s Amazonian heartland, loggers, ranchers and farmers followed close behind. They built side roads at right angles to the highway and cleared fields, creating a herringbone pattern of deforestation that is visible from outer space.

After a heavy rain, one of those side roads just east of Anapu churns into a muddy track navigable only by a four-wheel-drive pickup truck. The road passes through gently rolling terrain. In the foreground are scattered houses and pastures with scrubby vegetation. Beyond them, within sight but receding from the road, is the edge of the forest. In some places, where pastures lie abandoned, palm trees are reclaiming the landscape.

The road leads to a tract of land called Lot 126, where 33 farming families have settled and formed an organization called the God is Life Association.

On a steamy morning in April, they gathered in a small, open-sided, wooden structure with a blackboard and several dozen desks, which serves as a one-room school. The residents had to rebuild it recently, after a local logger burned down the former school in retaliation for their efforts to curb illegal logging.

The people here are second-generation settlers whose parents moved to the region in the 1970s, said Edimilson Ferreira Nascimento, 37, president of the association.

A group of them met in 2002 and decided to occupy a forested area outside Anapu. They needed a place where they could work to feed their families, Nascimento said.

“We were the children of farmers and didn’t have land,” he said.

About three years later, a man showed up claiming to be the rightful owner of the land, although he never showed Nascimento or his neighbors a document proving ownership. There have been threats of eviction and other sanctions every few years, but the farmers forge ahead. They have plans for expansion now, perhaps into fish farming.

“We’re still here,” Nascimento said, “believing first in God and then in justice.”

That, said Bishop Krautler, is part of Sister Stang’s legacy.

“The struggle hasn’t stopped,” he said. Her legacy is her “untiring defense of the Amazon, and a vision of the Amazon not as a place to be exploited, but as a place where people are able to live in the forest and make a livelihood there.” 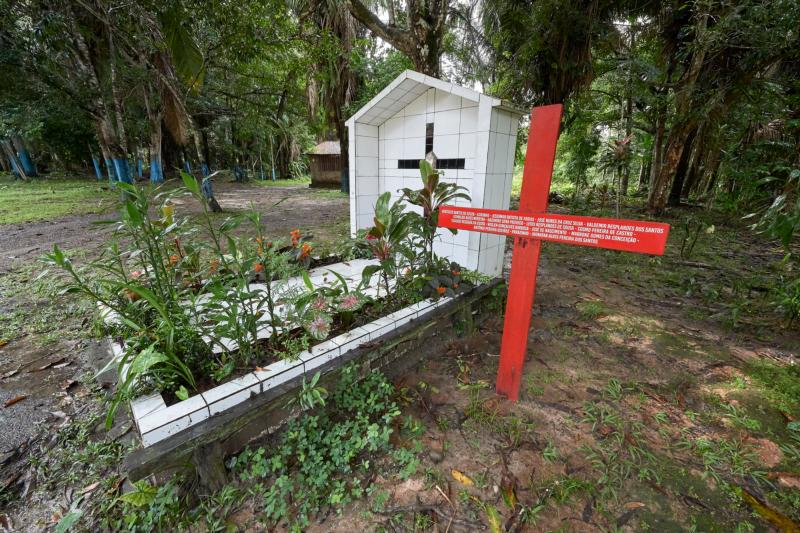 A red cross stands beside the grave of U.S.-born Sister Dorothy Stang in Anapu, Brazil. Sister Stang was assassinated in 2005. The red cross beside her grave bears the names of 16 local rights activists who have been murdered since her killing. Church activists say the killings continue, and they’re about to erect a second red cross with even more names. (CNS Photo/Paul Jeffrey)

NEXT: In Amazon’s cities, indigenous people are often invisible