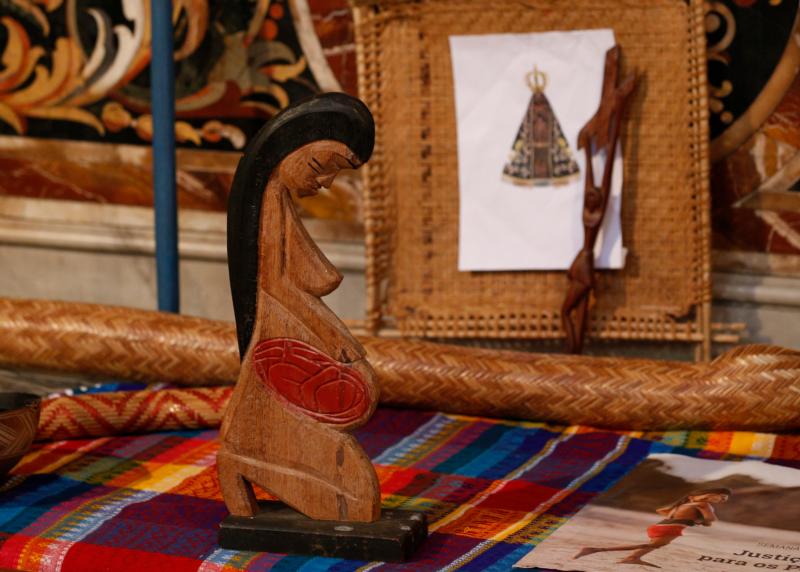 A wooden statue of a pregnant woman is pictured in the Church of St. Mary in Traspontina as part of exhibits on the Amazon region during the Synod of Bishops for the Amazon in Rome Oct. 18, 2019. Several copies of the statue were stolen from the church and thrown into the Tiber River Oct. 21. (CNS photo/Paul Haring)

UPDATED – ROME (CNS) — Two men entered a Catholic Church near the Vatican early Oct. 21 and stole copies of a statue of a pregnant woman that had been a centerpiece of several prayer services connected to the Synod of Bishops for the Amazon.

In a video shared with bloggers and Catholic news outlets that have complained about the statue being a pagan symbol, the two men set the statues on the railing of a bridge over the Tiber River and knocked them in, watching them float away.

Stealing the statues and throwing them in the river, he said, “is a gesture that contradicts the spirit of dialogue.”

“I don’t know what else to say except that it was a theft and perhaps that speaks for itself,” Ruffini said. Police are investigating the theft.

The statues had been kept in several side chapels at the Church of St. Mary in Traspontina where prayer services connected to the synod have been held daily since the gathering began in early October.

The statue was present Oct. 4 when Pope Francis planted a tree in the Vatican gardens and entrusted the synod to St. Francis of Assisi. It was used again Oct. 7 during a prayer and procession from the Basilica of St. Peter to the Vatican synod hall and early Oct. 19 as synod members and supports prayed the Stations of the Cross on the main street leading to St. Peter’s Square.

The video of the theft and news about it spread quickly on Twitter. Taylor Marshall, author of the book “Infiltration: The Plot to Destroy the Church from Within” and a frequent critic of the use of the statue, told Twitter followers “with great joy” that the images had been tossed into the river “as an act of obedience to our Lord and Savior Jesus Christ & in reparation to his Sacred Heart wounded by sin.”

Others, however, expressed disgust at the theft and destruction of statues.

Catholic author Dawn Eden Goldstein tweeted, “A sick crime. The statue was in the church to represent life given us by God. Catholic churches are full of allegorical images — pelicans, eagles, fish, human representations of virtues. Yet when Amazonian Catholics designate an image to represent their faith, they are ‘pagan.'”

The theft of the statues was denounced by “Amazonia: Casa Comune,” the umbrella organization of groups that placed the statues in the church and planned prayer, exhibits and conferences around the synod and its key themes.

More than 30 Catholic organizations from Europe, North America and South America designed the prayer services and events to highlight efforts to promote “integral ecology” — the protection of people and of the earth — and share the reality of the lives of the indigenous people of the Amazon, the group said in a statement published after the theft.

“We are deeply saddened, and, at the same time, we denounce that in the past few days we have been the victims of acts of violence that reflect religious intolerance, racism (and) disturbing attitudes aimed primarily against indigenous people,” the group said. The actions and attitudes show “a refusal to construct new paths for the renewal of our church.”

However, the statement said, “these acts may be repeated or become more serious.”

PREVIOUS: From sidewalk to swamp, wonders of creation abound

NEXT: ‘Loving neighbor as yourself implies caring for earth,’ theologian says