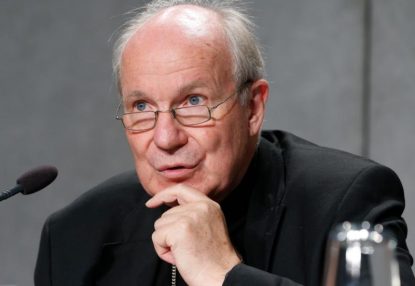 Cardinal Christoph Schonborn of Vienna speaks at a press conference following a session of the Synod of Bishops for the Amazon at the Vatican Oct. 21, 2019. (CNS photo/Paul Haring)

VATICAN CITY (CNS) — Austrian Cardinal Christoph Schonborn of Vienna said that as a European member of the Synod of Bishops for the Amazon, his first task is to listen and his second task is to examine ways his lifestyle and that of his community contribute to the suffering of the Amazonian people.

“I am here to listen because I’ve never been in the Amazon,” the cardinal told reporters Oct. 21 at a synod news briefing. “That’s why I am happy the Holy Father called this special, regional synod” with all the area’s bishops and representatives of the region’s priests, religious and laity “first of all, I think, to give a voice to this region, which is so important for the world.”

As a European, he said, “I don’t think it is up to us to administer” the church in the Amazon, “but to ask, ‘What is our contribution to the danger facing the Amazon?'” As an example, he pointed to his cellphone, noting that the coltan in it probably was mined in Congo or in the Amazon and likely damaged the environment.

One experience the cardinal said he wanted to share with Catholics in the Amazon, who face a tremendous shortage of priests, is the Archdiocese of Vienna’s experience with permanent deacons.

The archdiocese has 180 permanent deacons, almost all of whom are married, he said. They serve in parishes, church charitable agencies, hospitals, prisons and jails, and “could really help with pastoral work in the Amazon.”

Cardinal Schonborn also was asked why he thought “so much negativity is directed to Pope Francis.”

“I am old enough to have memories about the pontificate of St. Paul VI, and the critiques that he received are very similar to those that Pope Francis receives,” he said. “For one side, he was the destructor of the church; for the other, he was the impediment of progress in the church.”

For the people in the middle, though, “he was simply the pope and that’s my simple, basic, Catholic attitude,” the cardinal said. “He is the pope.”

Cardinal Schonborn said he had “good, close relations” with St. John Paul II, and “I was a student of Pope Benedict when he was a professor and I had a chance to work with him in many circumstances, mainly on the Catechism of the Catholic Church, and I have never seen the slightest, the slightest opposition” from the retired pope about Pope Francis.

“They are different because every pope has his own story and his own character, but he’s always the pope,” the cardinal said. “Therefore, it is very clear for me to be loyal to the pope, full stop.”

“To be pope is to be criticized,” Cardinal Schonborn said. “And loved by so many people around the world, admired and prayed for.”

Every Sunday, 1.7 billion Catholics around the world pray at Mass “for this pope. We will do so for the next pope.”

NEXT: ‘We are all responsible’: Bishop urges lifestyle change to protect Amazon