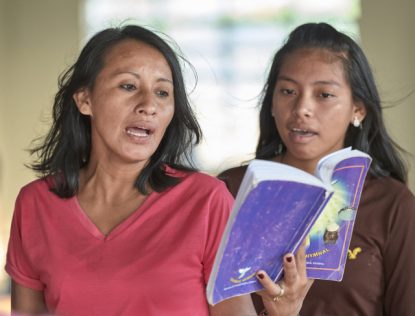 ST. IGNATIUS, Guyana (CNS) — In an open-sided circular building beside the Catholic chapel in this Amerindian village, Scarboro Father Ron MacDonell was explaining how the tongue, the teeth and the vocal cords work together to produce sounds.

His listeners, about 30 lay leaders from Macushi and Wapishana indigenous villages in Guyana’s southern Rupununi region, placed their fingers on their throats to feel the vibrations as they experimented with words.The session was part of a two-day workshop in April to help lay leaders improve their reading of the Sunday Scriptures in their own languages during the liturgies they lead in their communities.

Clare Alexander, 40, a Wapishana resident of St. Ignatius, was practicing aloud in both languages, because this village, which adjoins the town of Lethem, on the border between Guyana and Brazil, includes people from both indigenous groups.

Nearby, Elsa Ignacio, 64, a leader of the Catholic community in the village of Meriwau, was learning Wapishana.

“I need to teach the children, because we are forgetting,” she said. “The children are learning only English in school.”

Jesuit missionaries in Guyana are also sponsoring a two-year pilot bilingual education program, which they hope to expand, said Jesuit Father Varghese Puthusserry, who has worked among Wapishana people in the Rupununi region for the past decade.

He became fluent in Wapishana because, although the people in the communities where he worked spoke English, the official language of this former British colony, “I felt we were not communicating with them,” Father Puthusserry told Catholic News Service.

Over the years, people had been discouraged from speaking their native language, and young people preparing for confirmation “could not express themselves in either language,” he said. “They weren’t proficient in English and had lost their own language.”

That led to a literacy program, which formed the basis for the bilingual education program that has begun in three villages.

For Father MacDonell, a missionary and linguist from Canada’s Nova Scotia province, the two vocations are a natural combination.

“Missionaries have traditionally worked in foreign lands, so they are involved in learning other languages,” he said.

For most, language learning is “a means to an end, which is their pastoral or evangelization work,” he added.

But for him, language is more than just a way of communicating. It opens a window into indigenous cultures and enables him to help indigenous people maintain their identity.

The first European missionaries to venture into the Amazon in the 16th and 17th centuries learned native languages, developed dictionaries and translated the Bible.

Now, however, many of those languages are in danger of disappearing, and church workers are encouraging communities to keep them alive.

Indigenous languages have suffered a “drastic” decline in the Amazon basin, Father MacDonell said. He hopes the October Synod of Bishops for the Amazon, a Vatican meeting of bishops called by Pope Francis, will help call attention to threats to language and other aspects of indigenous cultures.

More than 300 languages exist in the Amazon basin, but many are spoken by just a handful of people. Children often do not learn their families’ native languages, because their parents would rather they learn the country’s dominant language — English in Guyana, Portuguese in Brazil, and Spanish in most of the rest of Amazonia.

Worldwide, linguists fear that nine out of every 10 languages will disappear by the end of this century. Globally, just a handful of languages that are most commonly used in business and finance, such as English and Mandarin, are crowding out other, less widespread tongues.

Many Amazonian languages already have disappeared since the arrival of the first missionaries.

In the 16th century, when Spanish explorers and missionaries first arrived in what is now Bolivia’s northern Beni region, in the Amazonian lowlands, there were about 400 indigenous groups who spoke 39 languages. By the 1990s, only three languages were still in use, and one was considered seriously endangered.

Many indigenous groups are very small, and in some just a handful of people still speak the language. Some people who are now middle-aged recall being punished for speaking their native language at school, so they stopped using it.

Hoping to spare their children similar shame and pain, and eager for them to have the advantages afforded by speaking the country’s dominant language, those parents did not teach the youngsters their people’s native tongue. If children do not learn a language, it is doomed to extinction.

People may also stop speaking their native language when they migrate from their villages to cities in search of jobs or education, partly because they face discrimination and partly because the dominant national language is the lingua franca.

When a language becomes extinct, more than words are lost.

“You lose another way of seeing reality,” Father MacDonell said. “Each language filters our human experience in a different way. That’s lost — that richness, that diversity.”

Language opens a window into the way in which people view and understand the world.

When the Macuxi people — as the Macushi are known in Brazil — look at the night sky, they have one word for bright stars and another word for dimmer stars. 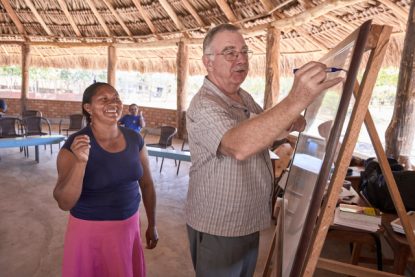 Father Ron MacDonell, a Scarboro missionary from Nova Scotia, writes on a whiteboard as he leads a workshop in St. Ignatius, Guyana. Based in Brazil, the Canadian is a linguist who helps indigenous people in the Amazon region improve their reading of the Scriptures in their own languages. (CNS photo/Paul Jeffrey)

“We wouldn’t make that distinction,” Father MacDonell said of North American missionaries. “A star is a star.”

Besides those details, other aspects of culture disappear when a language slips into oblivion, especially among people who pass information from one generation to the next by telling stories.

“You lose a rich tradition — cultural stories, the history, the oral tradition of the people,” Father MacDonell said.

Those stories often contain wisdom about how people relate to the natural world, including plant lore crucial for traditional healing practices.

Although those things can be written down, that means that what was once oral tradition “becomes a fossil,” Father MacDonell said. “You have a record of it, but it’s not the live listening or hearing of the culture and all the wisdom that goes with it.”

In various countries, however, indigenous groups are taking steps to keep their languages alive.

In Nauta, a town on Peru’s lower Maranon River, a church-run radio station launched an after-school program in which older Kukama people who still speak their native language teach children whose parents did not speak Kukama at home.

Some of the young people involved in the program have made music videos — singing and rapping in Spanish and Kukama.

Indigenous people in other countries have pressured their governments to provide bilingual teachers for schools. In the Javari Valley indigenous territory in western Brazil, on the border with Peru, children speak their native language in elementary school, often learning Spanish only when they leave their villages to continue their studies in the nearest town.

While that ensures that the native language remains alive and vibrant, it makes the transition to high school difficult for students, missionaries say.

In his early years as a missionary in Roraima, Father MacDonell worked with catechists from four villages to develop a dictionary of the Macuxi language. Years later, one of those people, a teacher, told him that he was using the dictionary to plan lessons for students.

Now the Canadian priest conducts workshops for indigenous groups in various parts of the Amazon who are seeking to keep their languages alive. He feels blessed, he said, that as a missionary he can combine sacramental ministry with his love of language and his desire to work for justice among indigenous people in the Amazon region.

“My fuel is my own passion,” he said. “At the end of my life, when (I) ask, ‘Was my life fruitful? Did I live up to God’s expectations or invitations for me?’ I’d like to say yes.”

NEXT: Retiree uses music, poetry to teach respect for environment in Amazon