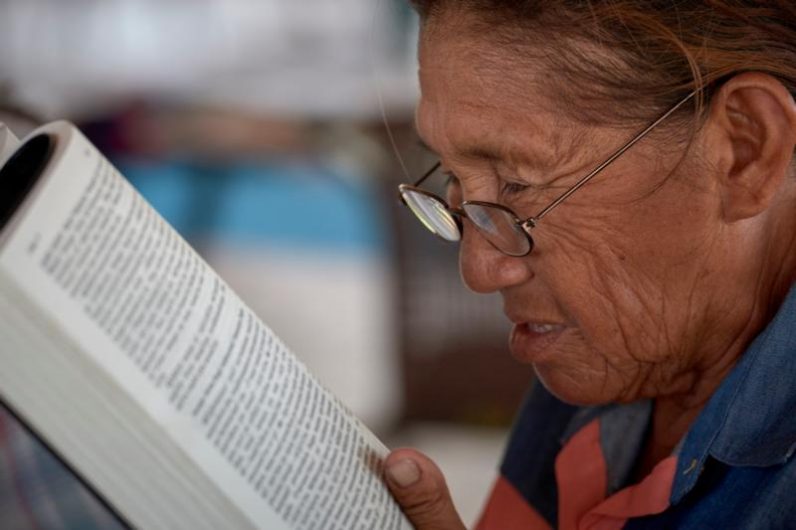 A woman reads the Bible during a workshop in St. Ignatius, Guyana, April 5, 2019. The workshop was to help laypeople improve their reading of the Sunday Scriptures in their own languages, so they can better lead liturgies in their own indigenous communities. The Vatican was to release the working document for the Synod of Bishops for the Amazon June 17. (CNS photo/Paul Jeffrey)

VATICAN CITY (CNS) — The Catholic Church must find ways to reach indigenous Catholics deprived of the sacraments in the most remote areas of the Amazon rainforest, and that may include ordaining married elders, said the working document for the Synod of Bishops on the Amazon.

“Affirming that celibacy is a gift for the church, in order to ensure the sacraments for the most remote areas of the region, we are asked to study the possibility of priestly ordination for elders — preferably indigenous, respected and accepted by the community — even though they have an established and stable family,” said the document.

Published by the Vatican June 17, the document also said the church should consider “an official ministry that can be conferred upon women, taking into account the central role they play in the Amazonian church.”

The document, drafted after input from bishops’ conferences and local communities, acknowledged that in the church “the feminine presence in communities isn’t always valued.”

Those responding to a synod questionnaire asked that women’s “gifts and talents” be recognized and that the church “guarantee women leadership as well as increasingly broad and relevant space in the field of formation: theology, catechesis, liturgy and schools of faith and politics,” the 45-page document said.

The synod gathering in October 2019 will reflect on the theme “Amazonia: New paths for the church and for an integral ecology.”

While rich in biodiversity, natural resources and cultures, the Amazon rainforest has experienced significant deforestation, negatively impacting the indigenous populations in the area and leading to a loss of biodiversity.

Divided into three main parts, the synod document first laid out the importance of the Amazonian region as well as the environmental threats facing it and its indigenous populations.

“Currently, climate change and the increase in human intervention — deforestation, fires and changes in the use of land — are driving the Amazon to a point of no return with high rates of deforestation, forced population displacement and pollution, putting its ecosystems at risk and exerting pressure on local cultures,” it said.

To respond to the needs and challenges facing the Amazon and its indigenous populations, it added, the church must have a “new sense of mission” that “opens new spaces” for finding ways to minister with and to the region’s people.

“This is the moment to listen to the voice of the Amazon and to respond as a prophetic and Samaritan church,” the working document said.

The document’s second part highlighted the dangers facing the region and its people who are threatened by those “guided by an economic model linked to production, commercialization and consumption, where the maximizing of profit is prioritized over human and environmental needs.”

Drug and arms trafficking, corruption, violence against women, forced migration and the exploitation of indigenous people and their territories, particularly those in “voluntary isolation,” are among the other challenges that the church must confront.

Among the suggestions proposed in the working document’s third part was the formation of indigenous laity so they can take on a greater role, especially in remote areas lacking the presence of priests and religious men and women.

However, those who are preparing for ordained ministry in the region must also receive adequate formation in the church’s “philosophical-theological culture,” although in a way adapted to Amazonian cultures.

The document also proposed “the reform of the structures of the seminaries to encourage the integration of candidates to the priesthood in the communities.”

Liturgy also plays an important role in expressing the church’s closeness to indigenous people in the Amazon, the document said.

Citing the Second Vatican Council document on the sacred liturgy and Pope Francis’ apostolic exhortation “Evangelii Gaudium,” the document highlighted “the enculturation of the liturgy among the indigenous peoples,” adding that cultural diversity poses no threat “to the unity of the church but rather expresses its genuine Catholicity by showing the ‘the beauty of her varied face.'”

“The sacraments must be a source of life and healing that is accessible to all, especially to the poor,” the document said. “We are asked to overcome the rigidity of a discipline that excludes and alienates” and instead offer “a pastoral sensitivity that accompanies and integrates.”

In order to help communities that find it difficult to celebrate the Eucharist due to lack of priests, it added, the church is asked to “change the criteria for selecting and preparing authorized ministers to celebrate it” and to work toward a “ministry of presence” and not simply the itinerant visits of a priest passing through.

The synod working document said that the church is called to play “a prophetic role” in the Amazon, and its evangelizing mission in the region implies “a commitment to promote the rights of the indigenous people.”

“The Spirit is in the voice of the poor; that is why the church must listen to them, they are a theological place,” it said. “In listening to their pain, silence is necessary in order to hear the voice of the Spirit of God. The prophetic voice implies a new contemplative look capable of mercy and commitment.”

The commitment to caring for the earth and defending the human rights of its inhabitants can be dangerous, the document said. “The number of martyrs in the Amazon is alarming.”

The church must support those who risk their lives for others “and remember its martyrs, among whom are women leaders like Sister Dorothy Stang,” a U.S.-born Sister of Notre Dame de Namur, who defended the land rights of the poor and was assassinated in Brazil in 2005.

NEXT: Amazon wildfires point to urgency of upcoming church synod