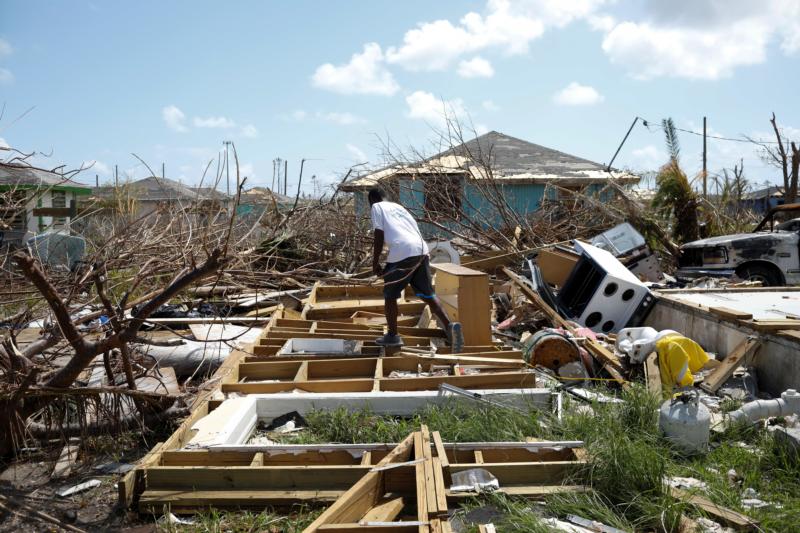 A man walks among the debris of his house Sept. 11, 2019, after Hurricane Dorian hit Spring City in the Bahamas’ Abaco Islands. Catholic Charities of the Archdiocese of Miami will ship targeted emergency goods and humanitarian relief to the hurricane-ravaged Bahamas through a temporary partnership with the Archdiocese of Nassau. (CNS photo/Marco Bello, Reuters)

Fresh from a fact-finding mission to Nassau Sept. 16-17, Peter Routsis-Arroyo, director of Catholic Charities, said Sept. 18 that he and Archbishop Patrick C. Pinder of Nassau agreed that specific material assistance be shipped to both Freeport on Grand Bahama Island and the capital city, Nassau, on New Providence Island.

The aid will be used for both emerging evacuee shelter needs there and for shipping onto the hard-hit Abaco Islands as that becomes more feasible.

The effort will be supported by the Miami archdiocesan special collection following Hurricane Dorian’s prolonged landfall in the Bahamas Sept. 1-3, while the South Florida-based Cross Catholic Outreach will facilitate most of the shipping at this time, according to Routsis-Arroyo.

He traveled to Nassau with Father Roberto Garza, who chairs the board of directors of Catholic Charities, and Marco Greenslade, Catholic Charities director of finance, who is a native of the Bahamas and reportedly lost an uncle during the hurricane.

Personal hygiene kids, emergency meals and power generators are among the first items to be shipped as early as this weekend.

“Our collection frees us up to ship supplies and helping Archbishop Pinder make some strategic decisions,” Routsis-Arroyo said, adding that he planned to notify the six other Catholic Charities agencies in Florida inviting them to join the effort if they choose to do so.

Meanwhile, a multifaceted church-sponsored relief effort is just getting underway in the Bahamas — with support from Caritas International, Catholic Relief Services and Catholic Charities USA, which Routsis-Arroyo said also has provided some grant money to support temporary evacuees coming to Florida.

He described the three-hour meeting with Archbishop Pinder as a welcome relief for the archbishop, who has had a dizzying schedule since Dorian, It was a follow-up to a recent helicopter tour he reportedly made to see the damage in Abaco and Grand Bahama.

The Nassau Archdiocese reports that it has lost at least two Catholic schools and one parish as a result of Dorian. Tens of thousands of residents have been displaced or lost their homes. The official death toll stands at 50, with hundreds or more still officially listed as missing.

“He was so happy to see us. We just sat down and talked out some strategy going forward, and I think it was what he was looking for and needed,” Routsis-Arroyo said.

Among Archbishop Pinder’s growing concerns is how to help support the many displaced persons at shelters and in ad hoc housing situations around Nassau with material aid and counseling; how to assist Catholic school faculty and students; and how to create effective short-term points of aid distribution and shelter facilities.

St. Francis de Sales Parish in Abaco seemed to be shaping up to be a critical distribution area, Routsis-Arroyo said, while Mary Star of the Sea Parish in Grand Bahama is a key point of contact there.

“There is no water, no electricity in Abaco and still a big fear that there was a large Haitian community which perished there during the storm. Eventually, Abaco will need a workforce to help it rebuild,” Routsis-Arroyo said.

He added that individual parishes and entities within the Miami Archdiocese have arranged their own shipment of aid, including Radio Paz and St. Joachim Parish in Miami, where Father Garza is pastor.

NEXT: Colombian priest works for recovery from civil war in his homeland