Colombian priest works for recovery from civil war in his homeland 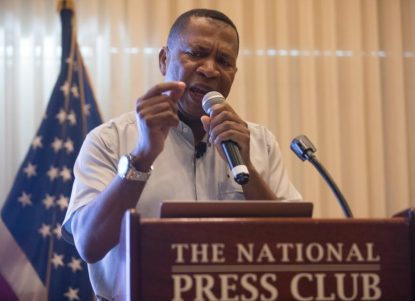 Father Sterlin Londono from the Diocese of Quibdo, Colombia, speaks during a Sept. 18, 2019, panel discussion on the 2016 Colombia Peace Accords at the National Press Club in Washington. Father Londono has been a priest for 21 years among his fellow Afro-Colombians in his native region of Choco. (CNS photo/Bob Roller)

WASHINGTON (CNS) — Father Sterlin Londono has been a priest for 21 years among his fellow Afro-Colombians in his home region of Choco in Colombia, which is rich in gold — but also rich in coca.

Choco also is home to Father Londono’s Diocese of Quibdo — and to a rebel group still trying to find its own way in the midst of a three-year-old peace process that has emphasized reconciliation between the people who work the land, the rebel groups that tried to take the land, and the government, which has a minimal presence in the region.

The work “is very enriching,” Father Londono said through an interpreter during a Sept. 18 interview with Catholic News Service in Washington, where he was speaking as part of an annual Washington Office on Latin America symposium on Colombia, “Protecting Peace: Progress and Challenge for the Full Implementation of the 2016 Colombia Peace Accords.”

During his presentation, he told of a FARC rebel — FARC is the Spanish acronym for Revolutionary Armed Forces of Colombia — who had taken part in a killing in the region several years ago. In 2017, a year after the peace accord was reached, the rebel returned to Colombia from Cuba, where he had been in hiding, Father Londono said.

“He did not know what would happen,” the priest told his audience in Spanish. “He wanted to apologize” for his role, “but what if the people rejected his apology?” Worse yet, Father Londono suggested, what if it were a trick and the man would have to face justice for his crime?

Despite three years of peace following armed conflict that dates back to the 1960s, Colombia has its work cut out for it. There are 8 million internally displaced people in Colombia — a figure higher than Syria or Iraq, which were ravaged by multisided civil war earlier this decade. Moreover, roughly 1.75 million Venezuelans have poured across the border into Colombia seeking relief from their own country’s political and economic turmoil.

Beyond FARC, there is a paramilitary group, the National Liberation Army, known by its Spanish acronym ELN, operating in Choco. It, too, wants to be involved in the peace process, Father Londono told CNS, but it has not decided what its priorities are in negotiating an accord.

In his multiple roles as pastor, advocate and mediator, Father Londono has observed how the treatment of past wrongs can have an impact on the present.

His region is still dealing with the consequences of a 2002 bomb blast that killed about 75 people and wounded twice as many. The dead, many of whom could not be positively identified, were buried, but later exhumed and the remains sent to Medellin, where autopsy specialists determined that some people’s remains had been inadvertently mixed in with those of others.

A more painstaking process of identification of the remains is nearly complete. Father Londono said he hopes the remains can be reburied in November. “The families have been grieving, and not grieving, for a long time. And the survivors,” he said, “they need a chance to complete their grief.”

Father Londono’s brother was himself killed in the civil war, and the priest has been subject to numerous death threats. That has not appeared to deter him in the slightest.

The memorial to Rev. King in Washington appeared on a slide during the priest’s presentation at the symposium. Father Londono said he greatly admired the civil rights figure’s focus on nonviolence, and sees Rev. King’s “I Have a Dream” speech as embodying the principles of equality he wants to see embraced in Colombia.

Besides being “the first pope from Latin America,” Father Londono said, Pope Francis’ theological worldview comes “from the peripheries” and from his calls for peace and justice as well as for environmental protection.

To mark his 20th anniversary in the priesthood, Father Londono said he was able to accompany the pope and concelebrate Mass with him when Pope Francis visited Colombia in 2017. “It was a great thing to share the holy Eucharist with him,” he added.