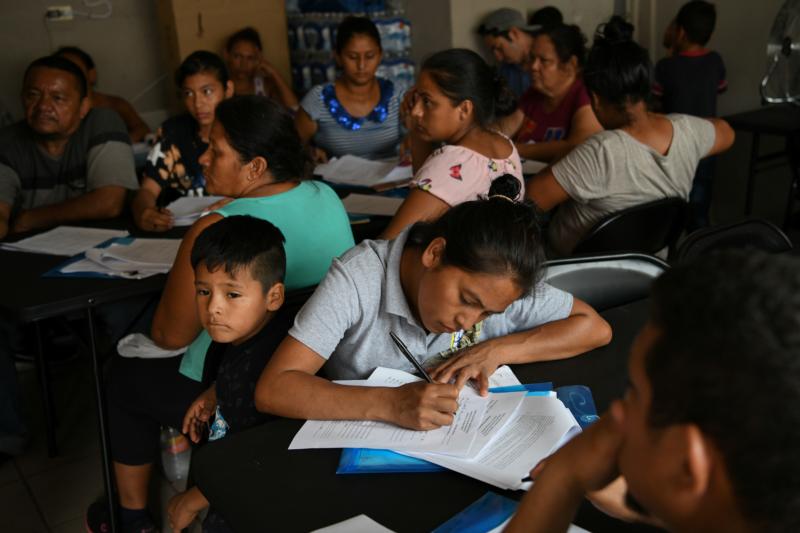 The complaint was filed Sept. 6 in the U.S. District Court for the District of Columbia and challenges three directives from Cuccinelli, who has served as acting director of the U.S. Citizenship and Immigration Services (USCIS) since June.

Filing the lawsuit were seven asylum-seekers and the Catholic Legal Immigration Network, Inc., Democracy Forward Foundation, the Refugee and Immigrant Center for Education and Legal Services and Proskauer, an international law firm.

Bradley Jenkins, federal litigation attorney at CLINIC, said the directives in combination have the effect of curtailing an asylum-seeker’s access to a lawyer or someone else to prepare for the first government screening interview after arriving in the U.S.

This so-called “credible fear” interview determines if an asylum-seeker will be able to formally file an application for asylum.

“This is an hour of any asylum-seeker’s life that will change their life forever. If they pass this interview, they get the ability to submit an asylum application. If they fail it, they immediately get deported,” Jenkins told Catholic News Service.

The lawsuit argues the USCIS directives reduce the time between arrival at a detention facility and the interview from 48 hours to the next calendar day, almost completely bar continuances that would allow more preparation time, and end legal orientations for immigrants.

“All we’re asking for is what the law allows. The reason they want to do it is they want to deport people quickly and without adequate process,” Jenkins said.

The legal filing also challenges Cuccinelli’s appointment within USCIS, saying it violates the appointment clause in the U.S. Constitution that requires Senate confirmation of principle officers within a presidential administration.

“Acting director Cuccinelli is not currently confirmed by the Senate and he didn’t come from a Senate-confirmed position,” Jenkins said.

As a result, Jenkins said, Cuccinelli’s directives hold no force or effect.

Jenkins said that the directives from Cuccinelli’s office have not gone through the established process of public notice and a comment period. “They just put them out there without justification,” he said.

The lawsuit also argues that Trump created the position of principle deputy director at USCIS to establish a different order of succession at the agency and to get around the Fedral Vacancies Reform Act so Cuccinelli could be appointed to head USCIS without Senate approval.

Cuccinelli has been a vocal supporter of the Trump administration’s hardline stance on immigration. Since his appointment June 10, he has been widely criticized by immigrant advocates and members of Congress for some of the agency’s actions.

NEXT: Marine Corps Base Hawaii has only U.S. military chapel named after bishop