Marine Corps Base Hawaii has only U.S. military chapel named after bishop 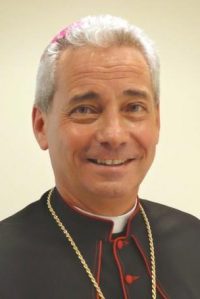 HONOLULU (CNS) — When Father David Hammond was a college student on the path to the priesthood, he began to think about being a military chaplain. To that end, he contacted the U.S. Archdiocese for the Military Services for more information.

Not long after he reached out, he got an email back from Bishop Joseph W. Estabrook, a former Navy chaplain and then a new auxiliary bishop for the military archdiocese. Bishop Estabrook had been ordained for the Diocese of Albany, New York, which also was Father Hammond’s home diocese.

The bishop gave Father Hammond his cell number and the two soon met for a dinner discussion about being a military chaplain. Giving out his cell and making himself available in this manner was something for which the auxiliary bishop was known.

Bishop Estabrook shared Navy sea stories and “a lot of stories of ministry of what he had been able to do as a priest and as a chaplain to reach people during difficult times in their lives,” Father Hammond said. “He was also just very polished, very well-spoken and he understood where I was coming from.”

“I was asking God for a sign for if he wanted me to pursue this, and then my first Q-and-A was with the bishop over dinner!” Father Hammond laughed. “I was thinking the door was opened a little bit further.”

The meeting left an impact, which helped guide Father Hammond to the priesthood and becoming a Navy chaplain. He is currently serving as the chaplain for the 1st Battalion, 3rd Marine Regiment at Marine Corps Base Hawaii in Kaneohe.

And when the priest came to Hawaii about four years ago for training, he was excited to see the words “Chaplain Joseph W. Estabrook Chapel” over the chapel’s main doors at Marine Corps Base Hawaii.

“I know this man! He’s a big reason why I’m here!” he remembered thinking. “So I thought it was very providential,” he told the Hawaii Catholic Herald, diocesan newspaper of Honolulu.

Bishop Estabrook had an affinity for Hawaii dating back many years. Ordained as a priest in 1969, he became a Navy chaplain in 1977.

While he had previously served aboard the Pacific-based USS Carl Vinson aircraft carrier in the 1980s, his specific Hawaii assignments began in 1997, the same year he was named a monsignor. Msgr. Estabrook was the U.S. Pacific Fleet chaplain and a U.S. Pacific Unified Command senior chaplain from 1997 to 2000.

He became the command chaplain at Marine Corps Base Hawaii in Kaneohe, Oahu, in September 2000.

At the time, the chapel on base was hard to find, tucked into a nondescript building that was a converted “chow hall.” But thanks to a push for funding from the late U.S. Sen. Daniel Akaka, the chapel complex building project went ahead in 2002 and was finished in 2005. It has a main chapel, a smaller day chapel, a sacristy, a crying room, a child care room, a kitchen, five chaplain offices, and many other smaller offices and multipurpose rooms.

Then-Msgr. Estabrook hoped to see through the finished construction and then retire, but then, unexpectedly, he has named an auxiliary bishop for the Archdiocese for the Military Services in 2004. 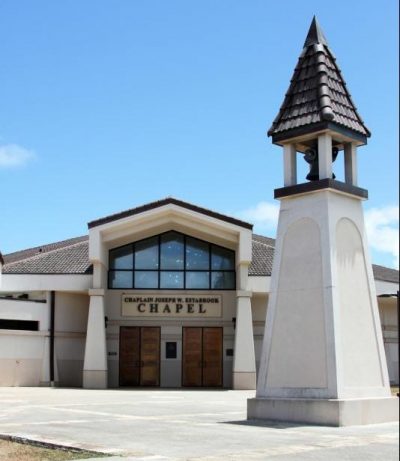 The Chaplain Joseph W. Estabrook Chapel on Marine Corps Base Hawaii in Kaneohe is seen Aug. 28, 2019. Bishop Estabrook, who was an auxiliary bishop of the U.S. Archdiocese for the Military Services, died in 2012. (CNS photo/Anna Weaver, Hawaii Catholic Herald)

Bishop Estabrook chose as his episcopal motto “Duc In Altum,” or “Set out into the deep,” after Jesus’ call to the disciples to go fish, literally and figuratively, which is fitting for a Navy man who inspired many priestly vocations in his work for the military archdiocese.

Father Hammond said some military retirees who attend Mass on base remember “Bishop Joe,” who is described in written accounts as energetic, a good conversationalist, a voracious reader and a big fan of dessert.

The bishop, who worked out daily and kept up a fast-paced schedule, was diagnosed in 2011 with pancreatic cancer and died the next year from the fast-progressing disease.

In a column he wrote for the spring 2012 issue of Salute magazine a few months before his death, Bishop Estabrook said one of the greatest gifts God had given him “has been the honor to serve these young men and women of our military,” saying their courage had given him “inspiration and ongoing strength.”

The chapel was formally named the Chaplain Joseph W. Estabrook Chapel in 2013 in memory of the late bishop. According to the military archdiocese, it’s the only U.S. base chapel to be named after a bishop.

Today it has three Sunday services, two Masses attended by about 150 people total and one contemporary Christian service that about 100 people attend. There are religious education classes, a women’s evangelical group, Mothers of Preschoolers meetings and other Christian-affiliated events.

The building also is a community gathering space where Boy and Girl Scout groups meet. Marines have briefings in the chapel space and families gather for deployment meetings.

That’s something Bishop Estabrook would likely be very pleased to see.

Weaver is associate editor of the Hawaii Catholic Herald, newspaper of the Diocese of Honolulu.

NEXT: Archbishop Etienne will not live in mansion: ‘I am a pastor, not a prince’